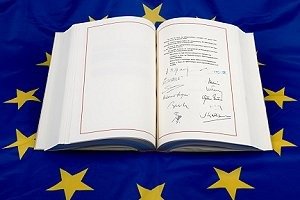 Preparations should be made for European treaty change according to the conclusions from today's (23 October) EU summit, following a lengthy dispute over the relative powers of the eurozone and wider EU 27 countries.

European leaders meeting in Brussels were unwilling to commit to any far-reaching treaty change – given the requirements for domestic referenda this entails.

But Germany insisted that provisions for "limited treaty change" were included in the summit conclusions in order to force more budgetary discipline on errant euro zone members.

German Chancellor Angela Merkel wants such changes to beef up the disciplinary procedures governing eurozone countries and to ensure that they retain their domestic finances within sharply prescribed criteria.

"The European Council notes the intention of the Heads of State or Government of the euro area to reflect on further strengthening of economic convergence within the euro area, on improving fiscal discipline and deepening economic union, including exploring the possibility of limited Treaty changes," read the summit conclusions, recalling that such decisions can only be taken by all 27 EU member states, not just the 17 that share the euro currency.

A report on how to proceed with the "limited changes" will be prepared in view of the December meeting of EU heads of states and governments.

Merkel favours clauses enabling eurozone countries failing to keep their national debt within a 3% cap of gross domestic product to be liable to court censure under EU law.

She also wants to explore the idea of having a dedicated European Commissioner in charge of enforcing budget discipline, another scheme that might require treaty change. Sarkozy is said to be supporting to the idea.

The UK and other non-eurozone states agreed that references to treaty change should be preserved on condition that the summit conclusions also included "safeguards" for the Single Market.

Prime Minister David Cameron wants to ensure that any treaty change does not have the effect of changing the nature of the Single Market or other existing EU trade provisions.

It was simultaneously agreed that meetings of the eurozone – starting with the meeting scheduled this Wednesday (26 October) – should only take place after full Council sessions, ensuring that members of the EU 27 countries have an understanding of what the eurozone agrees to.

Part of this deal granted European Council President Herman Van Rompuy a key role in mediating between the eurozone and non-eurozone member states.

The conclusions stipulate that presidents of the eurozone countries must always be appointed at the same time and for the same terms as Presidents of the European Council. Pending the next such election, the Council said Van Rompuy should perform this role, "keeping non Eurozone member states closely informed" of Eurozone summit preparations.

Van Rompuy was also charged with "exploring the possibilities" of treaty change.

The provisions were part of a compromise to satisfy David Cameron and other non-eurozone member countries that they would not be ostracised by any further hardening of the eurozone that results from treaty change.

Council officials briefed EURACTIV, however, that the deal also substantially bolstered the position of the Council and of Van Rompuy, effectively placing him in the key role of mediator between the two EU member state groupings, and charging him with the crucial role of pathfinding the treaty change.

The negotiations delayed the summit long after its anticipated lunchtime ending. Italy was fiercely opposed to treaty change, according to official sources, who said Berlusconi pointed out that it would be hard to sell to his people at the moment.

Another EU official told EURACTIV: "It took ages because Cameron was in a harsh kind of mood, he would not agree easily to anything."

A reliable source close to the negotiations said that French President Nicolas Sarkozy quipped to Cameron: "You didn't want to join the Euro, so why do you want to interfere with us!"

Guy Verhofstadt, leader of the liberal ALDE group in the European Parliament, told EURACTIV that changing the treaties was not necessary to tackle the euro zone debt crisis.

German Chancellor Angela Merkel has argued in favour of a treaty change to help enforce fiscal rules to avoid another debt crisis in the euro zone.

The Treaty on the European Union, signed in Maastricht in 1992, came into force in 1993. But making changes since then has proven cumbersome and complicated.

The Lisbon Treaty, was eventually ratified by all 27 member states after heated debate in Ireland which required two referendums to approve it.

France had rejected the Lisbon Treaty's predecessor, the draft European Constitution, in a 2005 referendum.

0 responses to “Treaty change comes back on EU’s agenda”