There is growing discontent with Renew’s Romanian President, Dacian Ciolos, as many national delegations feel they have been sidelined and the group has, in general, missed an opportunity to assert itself as a viable alternative to centre-right European People’s Party (EPP) and Social Democrats (S&D), the source explained.

“After almost two years, the majority of delegations now understand that the group is not led by an ALDE member, they see we’ve been losing a lot of opportunities, we could have been much more efficient,” the source said, adding that troubles became even more pronounced after last week’s problems in the EPP, which signalled a possible reshuffling of cards in the Parliament.

Ciolos’ PLUS party (Party of Liberty, Unity and Solidarity) is not a member of the Alliance of Liberals and Democrats for Europe Party (ALDE). Neither is Macron’s LREM, though all their MEPs sit in the Renew group within the European Parliament.

“Political trust is eroding and frustration is quite significant at this point. Many delegations are now committed to building a new political agenda for the second half of mandate,” the source added.

EURACTIV understands that if a critical mass is reached, the group might even seek mid-term elections and try to unseat Ciolos.

A source close to Ciolos’s camp confirmed to EURACTIV that a number of lawmakers have been complaining since the very start about his leadership. However, according to the source, these people mainly come from “old ALDE” and never managed to adjust to the new reality.

“We are talking about old-fashioned EU lawmakers who never adapted to the new impetus of socio-liberalism inspired by President Macron and fully embraced by Ciolos,” the source said.

“These old-fashioned liberals would sign any free trade without any conditions […] without considering the social rights, the environmental aspects,” the source added.

“History is moving on and we have to address this generational gap,” the source added.

Hungarian Prime Minister Viktor Orbán’s Fidesz party’s overdue departure from the EPP group in the European Parliament has set the scene for a possible power reshuffle in the chamber.

In an email sent to Ciolos on Thursday (4 March), whose content was made available to EURACTIV, Dutch Renew MEP Sophie in’t Veld requested a debate in the Group on Monday (8 March) to discuss potential implications for the power structure inside the European Parliament.

In’t Veld said she requested Renew’s Secretary-General to “urgently produce an analysis of the impact of the different scenarios” in terms of majorities or posts, saying that “if we do the simple maths for the status quo scenario, our group will become a very small group after the elections. We have to move now and have a plan for mid-term and we have to start preparing 2024”.

“If we are serious about creating a strong and broad centrist movement, liberal, progressive, pro-European, we cannot dither any longer,” the Dutch MEP wrote, adding that she does believe Fidesz’s move is “unlikely to remain an isolated event”.

“It may well trigger a reshuffle of the political landscape in the European Parliament, and more rapidly than we expect, (…) Renew needs to very quickly adopt a strategy and position itself. Meetings and negotiations are taking place as we speak,” ” in’t Veld wrote.

According to EURACTIV’s calculations, if Fidesz went to the far-right European Conservatives and Reformists (ECR) Group, the number of ECR MEPs would rise from 63 to 74.

Moreover, if Fidesz manages to convince Matteo Salvini’s Lega to switch from Identity and Democracy (ID) to ECR, it would take ECR’s membership above that of Renew, 102 to 97, making it the third biggest group in the Parliament.

“The Lega Nord, currently in the ID group but seeking to reposition itself as less Eurosceptic since their participation in the Draghi government, seems to be considering a move to ECR as well,” In’t Veld wrote to her party boss.

This would further weaken the liberals’ hand, as they are already internally divided between the green-leaning modern liberals, such as Hungary’s Momentum, and the more centre-right pro-market faction, which is likelier to side with the EPP.

The liberals are also worried about a strengthening of the left if the Italian 5 Star Movement’s 10 non-attached MEPs were to join either the social democrats (S&D) or the Greens.

Four 5-Star MEPs have left the party to join the Greens. 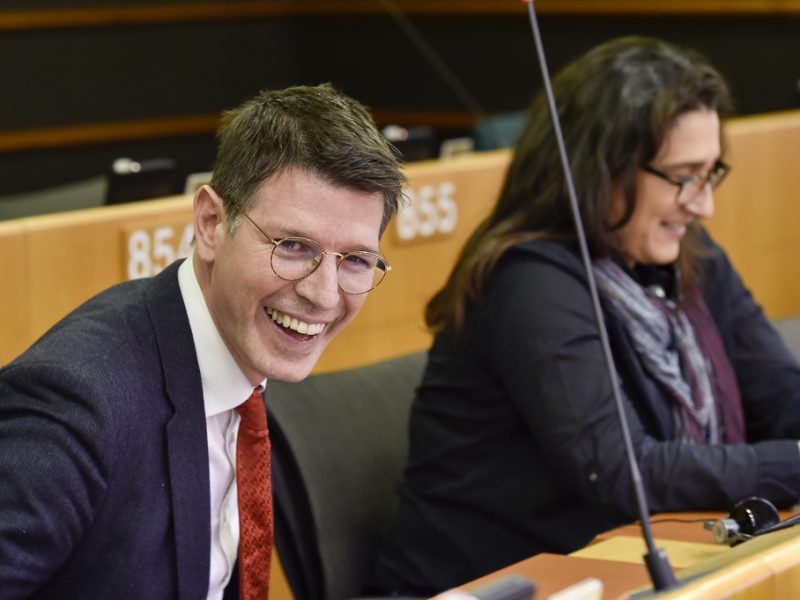 Four Italian lawmakers are about to leave the Five Star Movement (M5S) delegation at the European Parliament, though not the party itself, and plan to join the Green parliamentary group at a later stage, sources close to the matter have confirmed to EURACTIV.

“This reshuffle will affect our position in months and years to come, not least at midterm, ten months from now, when most posts will be distributed anew,” In’t Veld wrote, lamenting the “bitter pill” of the Liberals not receiving one of the presidencies of the Conference on the Future of Europe.

The Greens do not seem overly worried about the power shift in the Parliament, but the ECR, with Fidesz, would overtake them in numbers. EURACTIV also understands that the more far-right forces such as Lega join ECR, the more “toxic” it will become for the Greens to work with them on files that the two groups have so far found common ground on.

This could be happening fairly soon: Orbán called already on Friday (5 March) for the creation of a new European right-wing force for “our type of people” who want to protect their families and homeland and said “all types of proposals to renew European politics” were being considered.

French Renew MEP Valérie Hayer told EURACTIV France that even if there is no decision yet, “a merger of Fidesz, PiS (Poland’s ruling party), Lega, and Fratelli d’Italia is indeed underway”

“I believe that if Lega leaves the ID Group, it is also a sign that the exit from the EU is no longer attractive. In any case, such an agreement would be a setback for Marine Le Pen’s party…ID would lose its largest delegation,” she added.

An ECR party source told EURACTIV that “quite a few group members are looking forward to such an initiative”.

“However, it seems unlikely to me that the different factions and splinter parties would be able to agree on a common narrative that would satisfy all – some of them simply cannot agree with each other at the moment,” the source said, adding that this was particularly relevant for the national parties that face elections in the near future.

Another potential implication of Fidesz’s departure from EPP, according to a source from Renew Europe is that it could eventually weaken the “VDL majority”, the MEPs (EPP, S&D, Renew Europe) who supported the election of Ursula Von der Leyen as the European Commission chief in 2019.

The EPP will be in a difficult position and will be more vulnerable in voting, having to keep in mind the importance of not endangering the VDL majority.

“The EPP will now be weaker in this majority and will be forced to come closer to more progressive policies,” the source said.