Verhofstadt to be left out of the race for Barroso successor 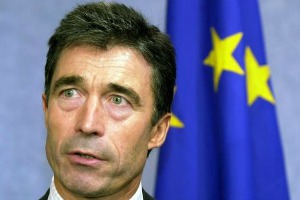 EXCLUSIVE / One of the most popular and outspoken European politicians, Guy Verhofstadt, former prime minister of Belgium and current leader of the liberal ALDE group in the European Parliament, is likely to remain outside the race for the post for the next Commission president, EURACTIV has learned.

The liberal European family is struggling to find a candidate for Commission president to replace José Manuel Barroso following the 2014 European elections because NATO Secretary-General Anders Fogh Rasmussen, a Danish liberal, is tipped to get another top job – European Council President.

Sources at the Liberal Congress, held in Dublin from 8 to 10 November, said that even if Verhofstadt is an obvious candidate for Commission president, the party is unable to put forward his candidacy, because Rasmussen, a former Danish Prime minister whose mandate as NATO leader expires in 2014, has ambitions to get the job of Herman Van Rompuy as Council president, EURACTIV was told.

But in both cases, it is seen as impossible that more than one liberal politician would get more than one of the three top jobs that will be up for grabs almost simultaneously.

The name of Rasmussen has not been publicly pronounced by any of the speakers at the congress.

Verhofstadt pleaded at the Congress that the liberals should have a common candidate for Commission president, insiders said. The two big political families, the Party of European Socialists (PES) and the European Peoples’ Party (EPP) have already announced that they would elect a candidate for Barroso’s job well ahead the European elections, in June 2014, to mobilise voters.

The Socialists are expected to nominate Parliament President Martin Schulz, and the EPP would back Polish Prime Minister Donald Tusk, Verhofstadt  said at the Congress, adding that it would be strange if the liberals would “abstain” from the race by not naming their candidate.

Schulz is an almost-certain candidate. However, it is unclear if the EPP nominate Tusk, who comes from a country outside the eurozone and whose command of English may not be sufficient for leading complicated discussions at the highest level.

Statements made from some liberal politicians behind closed doors have indicated that there was no consensus for putting forward a common candidate for Commission president. One speaker even accused Verhofstadt of making use of the floor to promote his own candidacy.

Opponents of Verhofstadt from within his party’s ranks argue that name-dropping at such early stage may be counter-productive. They also say that the candidate likely to be elected has few enemies, implying that the outspoken Verhofstadt is already out of the race.

This could be the third time that Verhofstadt loses out on the highest EU executive position.

He was a candidate for the Commission presidency in 2004, but was vetoed by then-British Prime Minister Tony Blair. And in 2009, Verhofstadt’s political friends had hoped for a liberal-socialist-green coalition to install him as successor to Barroso. But the Portuguese and Spanish Socialist prime ministers backed Barroso instead, and the centre-left camp followed.

A liberal forum in May will make another attempt to decide on the name of the candidate or candidates for the race, the Congress decided. (According to a draft resolution, consensus was eventually found that the liberals would nominate a candidate for Commission President “in time for the 2014 European Parliamentary election campaign”. But the text was not adopted due to disagreements on moving toward transnational lists for 10% of MEPs, on slashing the number of Commissioners, and on appointing half of them from the present MEPs.)

EURACTIV asked Rasmussen’s office to comment on his alleged ambition for a top EU job. NATO spokesperson Oana Lungescu responded: “The secretary-general’s mandate has recently been extended by one year until July 2014. He was very honoured by the trust and support shown by the governments of NATO Allies. So he’s got a job, it’s a big job, and he’s entirely focused on that.”

For the liberals, or at least for those close to Verhofstadt, if the European elections are held in June 2014, this would play in favour of the EU heads of state and government, who have the lead in selecting the new Commission president.

Under the Lisbon Treaty, EU leaders vote by qualified majority for a nominee for the post of president, taking account the results of the latest European election. This proposal is then put before Parliament, which must approve or veto the appointment. If an absolute majority of MEPs support the nominee, he or she is elected.

The problem appears to be that the Parliament does not have enough time to get organised due to the summer recess, and MEPs might not be able to strike an agreement before September, which would give EU leaders the upper hand.

If the elections are held in May, rather than June, the new Parliament would still have time to get organised and play a role in the process, liberals believe. They believe the election of the Commission president should ideally take place in July.

Speaking at the Congress, ELDR President Sir Graham Watson proposed that to avoid confusion, the European liberal family ELDR (the European Liberal Democrat and Reform party) should change its name to ALDE (Alliance for Liberals and Democrats for Europe), as the liberal group is called in the European Parliament. His proposal was adopted.

He also pleaded for a short “bullet-point”-type manifesto to be integrated to be integrated in national platforms for the European election, as well as to have “a first exchange of views about whether to adopt candidates for the top EU positions; and, if so, how and when.”

Watson criticised the EPP for taking on board such politicians as Italy’s Silvio Berlusconi, Romania’s Traian B?sescu and Bulgaria’s Boiko Borissov, as well as the PES for doing the same with respect to Zoran Jankovi?, a prominent businessman who became Prime Minister of Slovenia, as well as the Palikot Movement in Poland, led by businessman Janusz Marian Palikot.

Watson also proposed that to deal with youth unemployment, the EU needs a “youth civil service”

“We have dangerously high numbers of young people out of work. We are wasting talent, abandoning a work ethic, condemning young lives to idleness. We need to mobilise our young, not in the military service of the past but in a European civil service, practicable anywhere in the EU or beyond, to undertake socially usefully tasks,” Watson said.

Speaking at the congres, ALDE group leader Guy Verhofstadt blasted not only “the old Europhobes” among the UK conservatives, but also he newborn europhobes of Labour.

“It was pure nationalism, pure populism what [Labour leader] Ed Miliband did. Making a deal on the EU budget between his party and the most Europhobe politicians that you can find in Westminster,” he said, referring to a recent vote in which the Labour joined the most eursceptic wing of the Tories and passed a decision obliging Cameron to make sure that the next seven-year EU budget, which will run from 2014-2020, should be reduced in real terms.

“When it happened, I even tweeted that I missed Tony Blair. And to those who know my relationship with him, this shows the degree of my desperation. […]Cameron’s approach shall lead to the second class membership of the United Kingdom.  A status comparable to Norway, not to say Turkey,” Verhofstadt said. [more]

Nick Clegg, deputy British prime minister, said he hopes to be able to welcome the liberal parties to the 2013 ELDR Congress in London.

He avoided the subject of the EU budget, but developed his vision of the need of growth in the following terms:

“Where other politicians see risk, we liberals see potential. Where other parties see threats, we liberals see opportunity. The opportunity to spread prosperity by completing the single market in services and digital, unlocking over €4,000 in extra income for every European household; the huge growth potential for Europe to lead the world in research and development and high tech industries, by unlocking investment and venture capital for our innovators and through agreeing a new EU-wide patent; and the chance for us to use our collective weight to drive forward free-trade agreements for the benefit of European businesses and consumers.

"Deals like the recent EU-South Korea Free Trade Agreement that, in just one year, has increased European exports by €1.7bn; or game-changing deals with some of the biggest markets in the world, such as Japan and the United States,” Clegg said.

The next European elections will be held in all EU countries between 5 and 8 June 2014, unless the Council, acting unanimously, decides to change the dates. It will be the eighth European Parliament contest since the first direct elections in 1979.

The Lisbon Treaty, which entered into force on 1 December 2009, provides that the European Parliament shall elect the Commission president on the basis of a proposal made by the European Council taking into account the European elections (Article 17, Paragraph 7 of the TEU). This provision will apply for the first time for the 2014 elections.

At the Congress the Party of European Socialists (PES) on 28 September, its leaded Sergei Stanishev said that PES across Europe would be united with a common candidate for Commission president, and that the next year would be devoted to the process of selecting a candidate.

The European People’s Party (EPP) decided at its congess on 11 October that the EPP would proceed in two stages. The first will be to agree on the profile of the candidate, and the second on the procedure of the election [more].