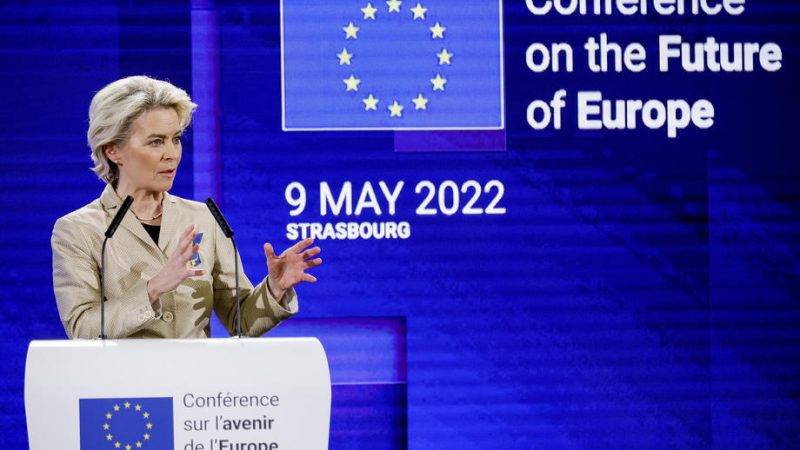 European Commission President Ursula von der Leyen hinted that she might support changes to EU treaties, should it be necessary to implement the recommendations of citizen panels from the Conference on the Future of Europe (CoFoE).

On Monday (9 May), the final event of the CoFoE – the EU’s deliberative democracy experiment – was held at the European Parliament in Strasbourg.

The meeting marked the culmination of a year of deliberation in which participants took part in EU policy-making, with the goal of forming citizen-led proposals. In Strasbourg, the final 49 recommendations were presented to the presidents of the European Commission, European Parliament and the Council of the European Union.

The Commission will announce the first new proposals related to citizens’ recommendations from CoFoE during the next State of the Union address in September, von der Leyen said.

However, based on the 178 proposals filed at the Citizen Panel stage, over 10% might require changes to EU treaties if they are to be fully implemented, experts have highlighted.

“It is now up to us to take the most direct way there, either by using the full limits of what we can do within the treaties or yes, by changing the treaties if need be,” von der Leyen said.

Among the possible changes, the Commission chief noted the unanimity voting, which often slows down the EU’s policy- and decision-making progress.

The topic of treaty change has been raised both by citizens and politicians multiple times throughout the course of the conference. The EU has so far been hesitant to commit to any changes, while citizens, political stakeholders and members of the bloc have been divided.

The European Parliament passed a resolution on Wednesday supporting the outcome of the CoFoE and changing EU treaties to facilitate the implementation of citizens’ proposals.

We need to go even further.

For example, I have always argued that unanimity voting in some key areas no longer makes sense, if we want to move faster.

Europe should also play a greater role in health or defence. pic.twitter.com/Tdeg6jIcWw