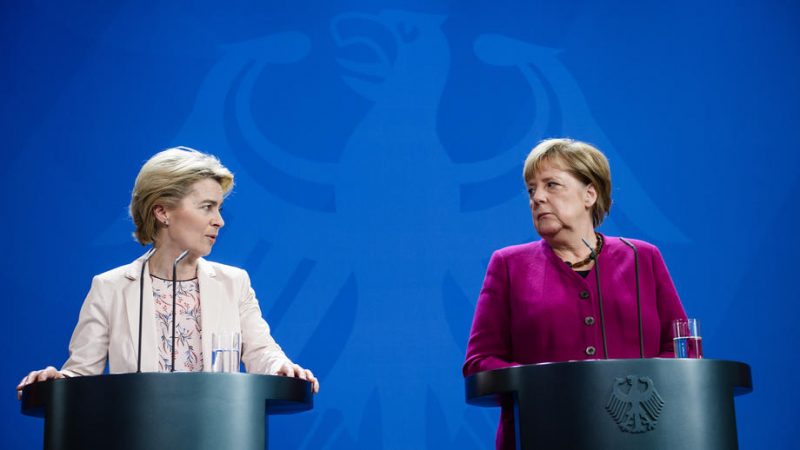 The incoming EU executive president announced a draft proposal for a new migration package. Her Commission is on track to present this in the first or second quarter of 2020.

“It must be our goal to become a model of how migration can be managed sustainably and with a human approach, but effectively,” she announced.

The EU has been divided for years over the reform of the current Dublin agreement on asylum procedures. In December 2018, the Commission said talks on an update had failed and refocused efforts on financing defence measures in the next EU budget.

Only today, in the margins of a meeting, did EU finance ministers finally agree to supplement the EU’s border and coastal protection authority Frontex with 10,000 officials by 2027.

Von der Leyen’s Berlin trip was part of the traditional Europe Speech, which is organised every year by the Konrad Adenauer Foundation.

During a lunchtime press conference with Merkel, she also expressed her disappointment that the opening of accession talks with Albania and Northern Macedonia had failed in the EU Council in October.

France, Denmark and the Netherlands had blocked the opening of the procedure at the time.

“I firmly believe that it is of the utmost strategic importance to bind the Balkans as closely as possible to the European Union,” said von der Leyen.

Until the accession talks are launched, it would “devote all its energy to developing joint projects” so that both countries do not lose the prospect of accession. “Otherwise, other states will fall into a vacuum,” von der Leyen added.

On Thursday (7 November), von der Leyen confirmed that Hungarian nominee Oliver Varhelyi would oversee enlargement policy. His mission letter includes an explicit reference to ensuring Albania and North Macedonia’s bids do not fall off the radar.

Von der Leyen also commented on the ongoing negotiations on the EU’s multiannual financial framework (MFF). The Council is still divided as to whether the overall budget should be maintained or increased.

In its proposal for the new financial period last May, the Commission proposed raising the budget from around 1% to 1.11% of European GNI, while the Parliament has been calling to increase it by 1.3%.

Above all, it is important to her that sufficient funds are available in those areas that urgently need to be modernised – defence, the internal market and also science.

“We hope that the MFF negotiations can be concluded under the forthcoming Council Presidency so that we can be freed from them,” Chancellor Merkel added.

However, it is doubtful that the talks will be completed this year, and experts do not expect an agreement under the Croatian Council Presidency in the first half of 2020 either.