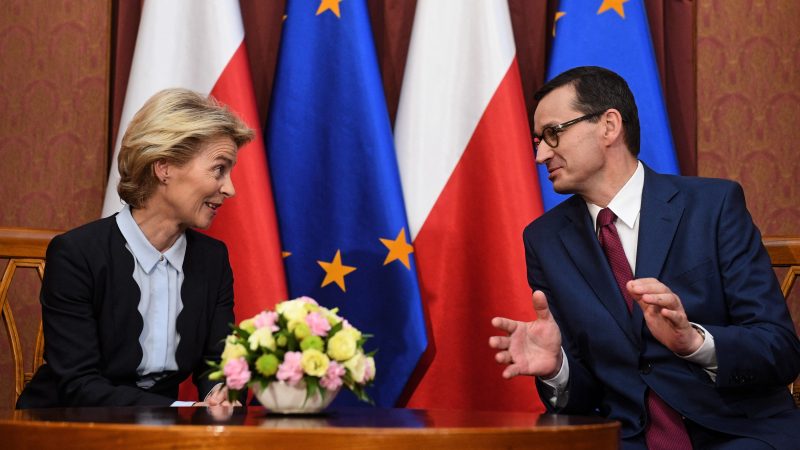 After one-day trips to Paris and Berlin, the new Commission chief chose the Polish capital as the next foreign stop, albeit a more tricky one, on her charm offensive tour of the European capitals.

“Poland is an important EU member state. (…) It was very important for me to come to Warsaw after Berlin and Paris,” von der Leyen told reporters in Warsaw.

She admitted that “difficult” topics such as migration and the rule of law were also on the agenda of the talks in Warsaw. However, during a joint press conference with Prime Minister Mateusz Morawiecki, she aimed to bridge differences that had separated Warsaw and Brussels in recent years.

“It is important to listen to each other and respect each other without ever forgetting why we joined the EU,” she stressed.

Welcoming her in Warsaw, Prime Minister Morawiecki said the meeting was meant to “discuss personnel details, the new Commission’s staff and which portfolio could be assigned to the Polish Commissioner”.

Warsaw is understood to be expecting something in return for their backing of von der Leyen as the Commission’s next President.

During the EU top job negotiations, the Polish government repeatedly said that ensuring a “good post” in the next European Commission cabinet was a precondition to supporting Ursula von der Leyen to become the EU executive’s chief, according to Deputy Prime Minister Jacek Sasin.

EURACTIV Poland has reported that Warsaw may be interested in a post related to energy issues, and Sasin confirmed the government’s aspirations for the energy post in an interview with TVN24.

In an interview with EURACTIV.com earlier this month, Foreign Minister Jacek Czaputowicz said Poland was looking for an “economic” post. “We know how to do it, we are developing quickly, and we have one of the highest paces of economic development.”

Furthermore, the Polish prime minister said on Tuesday (23 July) that Warsaw already has a range of candidates for Commissioners posts and that he will talk to von der Leyen about their scope of competence.

The European Parliament is set to vote on the entire composition of the new Commission in October and the hearing of individuals will take place after the summer break.

Poland’s right-wing government is hoping for more understanding from the EU under von der Leyen and an end to the rule of law sanctioning procedures that the EU has launched against Warsaw over its judicial overhaul.

Morawiecki welcomed Von der Leyen “with great openness, with great hope that in the coming years we will try together to create a new opening, a Europe of compromise, a Europe of common understanding on many topics concerning trade, energy, economy, future, innovation.”

In economic matters, Von der Leyen said she wants to focus on innovation, as well as small and medium-sized enterprises (SMEs) which are the “backbone of the economy”.

“We will need huge investments in these regions,” von der Leyen added.

On security, von der Leyen said that “one thing is certain: common defence will always rest primarily on the shoulders of NATO, it is the strongest alliance in the world.”

“There are other fields in which the EU, and not NATO, have a role to play, which is why we need procedures and structures appropriate in this direction,” she said pointing to the creation of PESCO, the EU’s joint military project.

Referring to the difficult history between Germany and Poland, von der Leyen said that her father was the first politician who “played a key role in accepting the (German-Polish) border on the Odra and Nysa Łużycka”.

“He said that this must be accepted because for us there are centuries of common history, beautiful history and tragic history, and now our role is to build a common future,” the new Commission head emphasised.

“We are on the same side of the table and if we look around the world, we will understand that key values ​​require protection,” the Commission chief added.