20 Visions for Europe: ‘My future Europe is again confident’ 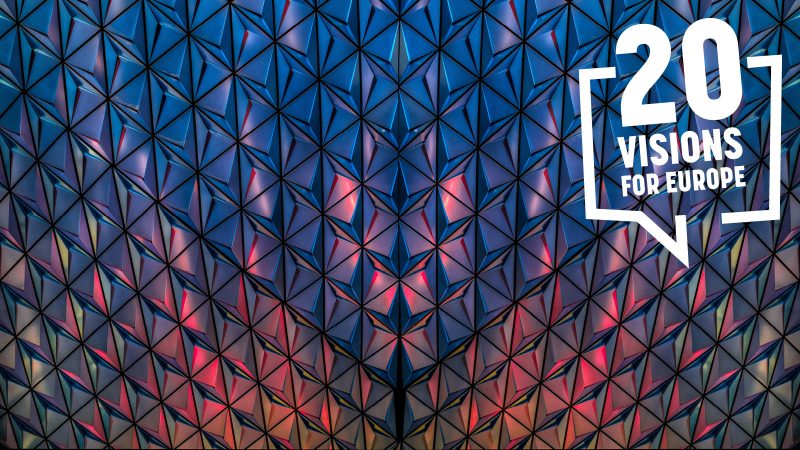 My future Europe is again self-confident, open to the world and beyond, while also open towards itself. There is no end to its history, only the beginning of a new chapter.

My future Europe is entirely Unionised – with all those nations partaking in its history, glorious culture, enduring democratic fabric and present aspirations.

It builds upon the narrative of the formidable post-War resurrection, to add that of the common identity and way of life forged by the borderless exchange of related, yet specific, identities.

It is a pragmatic statement of admission that, in a world of Grands, none of our nations, and no combination thereof, stand a chance to successfully compete on their own. That is true geopolitically, economically, militarily, technologically, and these are all becoming closely intertwined in a swirl of transformational changes.

But together, as Europe, we do have good prospects of shifting gears, of catching up and even prevailing in several areas – digital technologies and entirely new business models and financing schemes built around them should be our top priorities in that respect.

Europe must already act now and lead the way globally in creating a legal framework for new technologies such as AI and blockchain. A smart workforce with the right set of skills is what underpins my future Europe of innovation. It will be a place where everyone can succeed.

By 2050, my Europe will be a carbon-neutral economy, with a highly efficient and predominantly clean single European energy market. Just as it has done to date, my future Europe will continue to be a leading force in addressing climate change and advocating for sustainable growth.

We will mobilise all available sources, political, public and private actors, to ensure we leave a healthy planet to our children.

Together, we can make wiser choices for our next strategic economic priorities; and together, we can forge wider global alliances and steer us clear of a global order under strain and into one that is sustainable and fair, while hopefully remaining of a liberal extraction.

When the game is being played by different rules than those we submit to, we as Europe should recognise that we can be in a position to lead by example and if necessary, bring about an entirely new set of rules. Our main aim in that respect should be to reinforce multilateral institutions and treaties.

We also need to take the time to find ways of making our decision-making more effective, based on the substantial practice of checks and balances gathered by our European institutional framework.

By strengthening ourselves from the inside, we will be more powerful and credible on the world stage. The EU also is too much a part of our everyday lives not to pursue the quest of bringing European politics within actual reach for citizens from all across the Union.

As it seems that we are approaching the endgame of what some are calling the fourth wave of populism to have visited Europe since the last World War, with several trials and fails already consumed, now is the time to draw the lessons of a troubled decade and move on to honest, responsible and competitive politics, while at the same time restoring decency to public expression.

Europe is the original soft power in history. I believe its famed power to shine and inspire on Earth, and increasingly also in space, can endure, as long as we resolve to address truly jointly each and every salient change, challenge and opportunity of our times.

My future Europe is leading by example, as it is a continent primarily in a cultural and political sense. Europe, rich in diversity, is first and foremost its people; as long as they will feel, deep down, national first, European always, there is a bright future for our iconic continent.

One response to “20 Visions for Europe: ‘My future Europe is again confident’”