20 Visions for Europe: ‘People will stand up for a decent, democratic and humane society’ 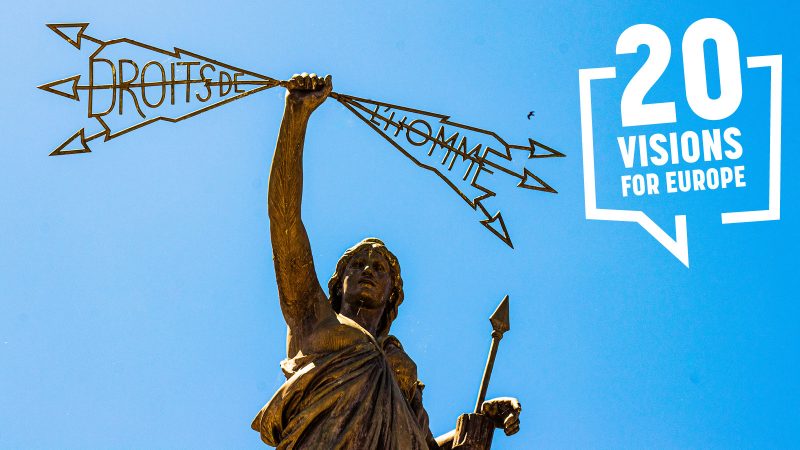 “20 Visions for Europe” gathers unique visions from public officials, intellectuals, artists, diplomats, athletes, civic actors and business representatives. The project is part of EURACTIV’s celebration of 20 years of free, independent reporting with European values at its core. The partner of the project is Stars4Media.

Luca Visentini was re-elected for a second four-year term as ETUC General Secretary at the ETUC Congress in Vienna in May 2019. He has been active in the trade union movement since 1989, including as general secretary for Italian union UIL in one of the country’s 20 regions.

The next twenty years will be decisive for the future of human society – in Europe, and on every continent.

As I am writing, the world’s largest rainforest, the Amazon – the lungs of our planet – is on fire. It was no exaggeration when President Macron told the G7 “our house is burning”.

Decisive climate action is needed from governments and business but also support from citizens to make sure that change is socially fair, and that the heaviest burden is not placed on the poorest and most vulnerable in society, including workers who are at risk of losing their jobs.

We need a just transition, based on public and private investment which should generate clean industry and new and better jobs to compensate for those that will be lost. Regions that depend on heavy industry have to transform, and affected workers have to be accompanied by labour market and skills policies that guarantee they are not left behind.

Only a strong alliance between governments, employers, unions and civil society can really deliver the just transition and the green deal Ursula von der Leyen has announced in her speech to the European Parliament.

Climate change is an existential threat, but not the only imminent challenge that Europe – and the world – has to tackle in the next twenty years.

Social democracy is perhaps Europe’s greatest achievement: a society which is democratic, (one in which everyone has a vote and other ways of having a say in how society works) and social (one providing services and benefits to ensure that everyone has access to decent living standards and opportunities funded by fair taxation linked to the ability to pay).

Today, both democracy and our welfare states are under attack – within Europe and beyond.

Since the 1980s, with unregulated globalisation, and particularly later as a consequence of the economic and financial crisis, we saw the rise of inequality and social exclusion, with more and more tax breaks for the rich, privatisation and tax evasion/avoidance by multinationals.

Then came the austerity policies, with attacks on public spending and cuts in wages and social protection, which were supposed to resolve the effects of the crisis but failed miserably.

Finally, as a consequence of those unfortunate developments and blind mistakes, we had the rise of far-right sovereignist movements, with doubtful allegiance to democracy.

Now we have prominent populist leaders in positions of power showing total disregard for truth, tolerance and human decency: with their hate-filled attacks on migrants, on international cooperation including the European Union (the world’s most successful regional peace and cooperation project), on women, on minorities, on environmental protection.

Sometimes they promise working people to protect their rights and jobs, to give them back their future, to represent them better than their trade unions do, thus attracting some of them with their fake rhetoric.

But when they get into power, they don’t keep their word, and implement business as usual, neoliberal and antisocial policies, while escalating corruption and infringing the rule of law.

In the next twenty years, we must reaffirm and spread democracy, and the most effective way to do it is to restore and defend our social model, to rebuild the Social Contract that was at the basis of the European social market economy and that has been broken over the last decade.

This means shaping a socially and environmentally sustainable economic model, based on public and private investment in the interest of people, on quality jobs and shared productivity, on responsible entrepreneurship and decent wages, on fair taxation and sustainable trade.

This means ensuring a level playing field for businesses and equal opportunities and rights for all workers on the labour market; means guaranteeing that everybody is protected and nobody is discriminated against, in the workplace or in society; means that the social partners and civil society organisations are involved in decision-making processes, and that social dialogue and civil dialogue represent the pillars for restoring social democracy.

Without a functioning social democracy, without social dialogue and industrial relations, without a commitment to the common good of all people, we cannot manage any of the major challenges we will face in the next twenty years, including the technological developments which will have a big impact on the number and the quality of jobs, and on human control of work and of decisions that affect people’s lives.

We, all together, have to make sure that great transformations like globalisation, climate change, digitalisation, automation and the development of artificial intelligence are managed in a way that benefits society and improves the working and living conditions of all.

I am confident most people want and will stand up for a decent, democratic and humane society. The struggle for democracy and a fair and more equal society will neither start nor finish in the next 20 years, but we certainly need democracy and social fairness to tackle the challenges we face today.

I am an optimist and I think we will make it. But we won’t unless we act now.