20 Visions for Europe: ‘Start thinking about the interests of children’ 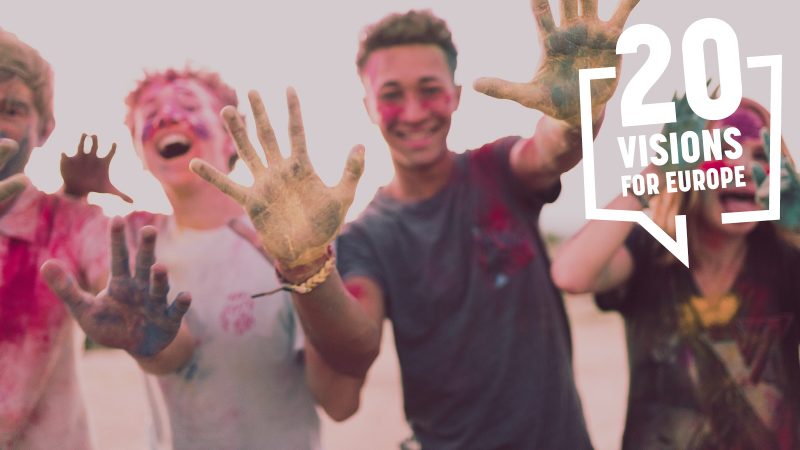 The following essays were contributed by two members of the Eurochild Children’s Council, which includes children aged 11-16 years from 12 European countries. Their last names have been withheld to protect their privacy.

My Europe in 20 Years

I am a 15 year old Romanian/British teenager. What exactly does this mean? Who am I? Well, I am a European, member of the Eurochild Council and also, member of the UK Youth Parliament for Cardiff. I am also an optimist regarding the future of young people, which is also the future of Europe!

Geographically, Europe is a continent, but actually it is way more than that. Europe is the cradle of democracy (Athens), the place of the Renaissance (Florence), it is full of history, culture, and traditions; it has the city of lovers (Paris), and many other beautiful places and especially great people. This continent is my Europe, our Europe!

It is old but always attractive, it has been through many wars, diseases, natural disasters, but it has resisted. I am convinced that in the next 20 years, it will have many problems to solve (Brexit, immigration, poverty, climate crisis), but together we will overcome them. We will learn to overcome problems, to understand each other, to think about the future of children and give everyone the right to an equal life and full of opportunities.

I believe that in 20 years, Europe as a whole will learn to be more welcoming, and truly give opportunities to all. People will realize that the way forward is united and the future generations will revolutionize the way we think.

In 20 years, I am convinced that our Europe will start to fully prioritise education and safety of all, more than it already does. And here I am not just referring to physical safety, but schools and other institutions will look at emotional wellbeing as a reality, and that Europe will become a place where you can easily speak your mind, that you can have your own ideas and concepts and not be judged.

I am a dreamer and I am convinced that over 20 years, Europe not only will it be just as charming, but it will provide every country with the same chance of development, so that the terms ‘’rich’’ and ‘’poor’’ countries no longer exist, so that everyone has  the chance to define who they want to be themselves.

The ultimate goal must be that everyone has the best opportunities in life, regardless of age, ethnicity, religion or sexual orientation, and in my opinion, this concept will be achieved in 20 years. Together, let’s make this wonderful Europe an even greater place to live!

My Visions for Europe

Europe has through its history been a continent with lots of dramatic changes. Some of these changes have changed Europe in a good way, some have changed it in a bad way. In my opinion, if we want to find out what will change in 20 years and what our expectations should be, we would first have to know what has changed in the past 20 years.

Since 1999, lots of things have changed. For example, technology has progressed a lot, with new possibilities such as being able to call someone and use the internet at the same time, you can watch movies online, and you don’t have to memorize phone numbers now.

But also, terrorist attacks have been introduced, climate change is becoming a bigger and bigger threat, and child poverty is a big problem that children still face.

Education systems still remain the same in some European countries, in fact, they haven’t changed in the past century. And wars continue, together with the mass immigration that follows them.

So, what are my dreams for Europe? I believe that with the right circumstances, Europe could be a paradise. Child poverty can finally be eliminated, climate change can be stopped, education systems will change for the interest of the children and all children will have good healthcare.

What are the right circumstances, you may ask? Politicians and decision-makers have to take children’s opinions into consideration. They have to start thinking about the interest of the children and not the “interest of their pockets”. Finally, they should not be pessimistic but realise that these problems can in fact be eliminated.