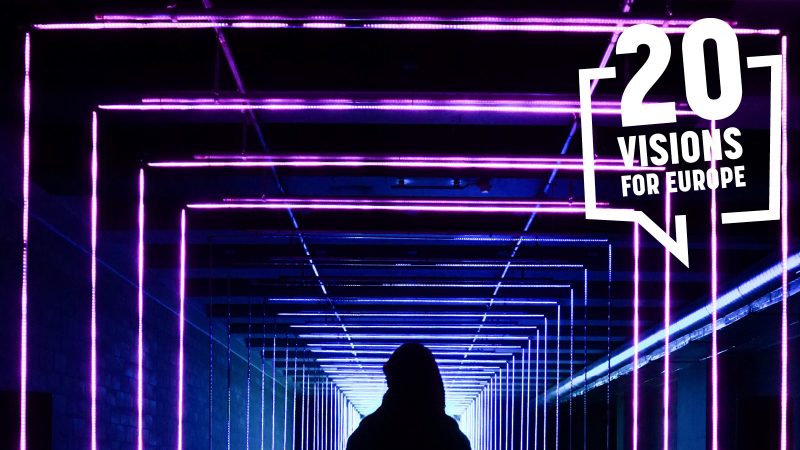 This poem is published as part of the project “20 Visions for Europe”.

This poem is published as part of the project 20 Visions for Europe, gathering unique visions from public officials, intellectuals, artists, diplomats, athletes, civic actors and business representatives. The project is part of EURACTIV’s celebration of 20 years of free, independent reporting with European values at its core. The partner of the project is Stars4Media.

Freja Dohrn Ellefsen is a 20-year-old student, activist and volunteer. She is Danish and Norwegian, and is currently studying International Relations in the U.K.

In the next twenty years, Europe must learn to read

The stories of the sunken ships and swollen bodies,
silenced screams and blood-stained dreams
of those we tell ‘go home’
to a place we’ve never seen, a place they’ve never been
allowed to build a home
But those hateful words of ignorance
bounce back from our blue screen and bite us in the arse
so we write new policies to keep
them out, hoping it means we’d be kept in

In the next twenty years, Europe must learn to teach

Because we yell for power with words so grand
we do not understand the change we demand
when we judge, we speak, we vote
And when things go wrong we yell at those we put on top
too little, too lazy, too late to stop the tide
As we write the future onto boulders
and put it on our children’s shoulders

In the next twenty years, Europe must learn to remember

That women lost their life on counter tops
when coat-hangers weren’t used for coats
but body parts the judges wouldn’t name in shame
Hindered then as now from bodily autonomy
by personal economy and men in high positions
in the state, in their faith, and in the court if those fell short
Just like love was doomed a sin it’s always been
a fight to give that equal right to those excluded from the table
So people lost their chance to love, to grow, to be
it’s time to set those rainbows free

In the next twenty years, Europe must learn to listen

To the children marching in our streets
fear on faces, words in hands
Scared of what their futures hold
not okay with what they’re told
by all of their supposed protectors, calling out their age
Those who watch the planet burn, those who still refuse to learn
who sit and wonder whether this
is of underage concern

In the next twenty years, Europe must learn to understand

That we aren’t all the same
that the starving parent will choose those able
to put the food back on the table
today, or the state will take their child away
So the fancy people in fancy cars and fancy clothes
who know the facts but not the rest
speaks for all and knows the few
will always be the second-best
until they learn how the oppressed
survives

In the next twenty years, Europe must learn to act

Upon the promises we made
1948 – we said that humans are equal in rights
but when votes are in sight, we give up those fights
Close our eye and let peoples die
1950 – we prohibited torture and inhuman treatment
but we still detain our children so frequent,
awkward silence is the newest agreement
2000 – we promised life and environmental protection
but as we burn our planet we ignore that connection
we oppress the oppressed in fear oppression
But we promised we’d be what we wanted to be
so it’s time to make it reality

See more from the 20 Visions for Europe project here.

One response to “20 Visions for Europe: ‘Twenty years, time to learn’”