For the moment, no one is talking about the ratification of a possible new treaty following the Conference on European Reform. To avoid failure and to engage citizens, the EU’s institutions must be made to work according to the principles of representative democracy, and treaty reform must be the central issue at stake in the European elections of 2024, write Giorgio Clarotti, Oliver Costa and Christophe Leclercq.

A ‘Conference on the Future of Europe’ will open this spring. The Juncker Commission (with more than a thousand ‘Citizens’ Dialogues’ since 2015) and President Macron (by launching ‘Citizens’ Consultations on Europe’ in 2018) have tried to involve citizens in setting the agenda for the 2019 European elections. The Conference intends to build on these reflections and on the contributions of NGOs and citizens, but this will not be enough. It is also necessary to organise the conditions for a real democratic debate on the final text, so that it can be followed up.

Indeed, the Conference’s proposals that fall within the Union’s current powers can be implemented by the Commission, which will have a clear mandate to do so. On the other hand, if there is to be a reform of the Treaties, it will necessarily take the form of a Convention or, for a minor revision, an Intergovernmental Conference (IGC). In any case, the text will then have to be ratified in all Member States. This is the challenging bit: the parliamentary route tends to operate on the fringes of public debate, whist referenda debates often address questions other than the one put to citizen.

If a new reform of the treaties is not to suffer the fate of the 2005 European Constitution, it must be placed at the centre of the 2024 campaign. Political orientations of this magnitude must be discussed in depth within the political parties, at all levels of government, and then between them; and must be the central issue at stake in the elections. On this condition, we believe that the ratification of a new treaty could escape the difficulties encountered over the past 30 years. Moreover, the discussion of new treaties in 2022, as proposed by the Council and the Parliament, risks interfering with the German and French elections of 2021/22 and the European elections of 2024 (Cfr Exhibit).

First the Conference, then representative democracy

Referenda are often presented as the democratic instrument par excellence. We believe, however, that it is not suitable for the ratification of a new treaty. Indeed, it does not allow a debate on its content – citizens are forced to approve or reject it in its entirety. A referendum is a potentially virtuous instrument for deciding on a specific issue that is well understood by citizens, but it does not allow for a constructive debate on a complex text containing dozens of provisions of various kinds.

In order to overcome this difficulty, we propose that the EU institutions should operate according to the logic of representative democracy, in order to promote a broad debate to confirm the guidelines proposed by the Conference. This approach underpins the legitimacy of national political systems: government programmes are not the result of a conciliation process validated by a referendum, in an all-or-nothing logic, but of a wide-ranging and contradictory public debate, decided by legislative elections. 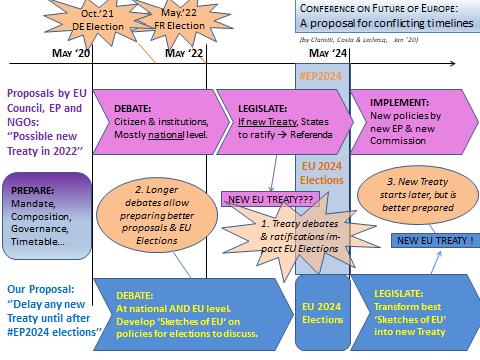 The proposed timeline for the #FoEConference, ending in 2022, will clash with DE, FR and EU elections. We propose to make treaty reform the central issue at stake in the European elections of 2024.

The campaign for the 2024 European elections must therefore become the moment for a fundamental political debate on major European options, and citizens must be allowed to express themselves through their vote. The results of the ballot will make it possible to see where citizens’ priorities and preferences lie. In short, an election favours a more subtle debate than a referendum, and allows citizens to feel genuinely involved in the choices. However, three problems remain:

To overcome these difficulties, we propose a step-by-step approach, separating substance from the ratification process :

We will then be in 2025. Some will find this horizon too far away. But, in the current context of the crisis of the European idea and the rise of Euroscepticism, it is no longer possible to rush things by negotiating a new treaty behind closed doors. Broad deliberation based on participatory democracy: this is the only way to define new European perspectives with the support of a broad public.