Conference on the Future of Europe: Promises and pitfalls 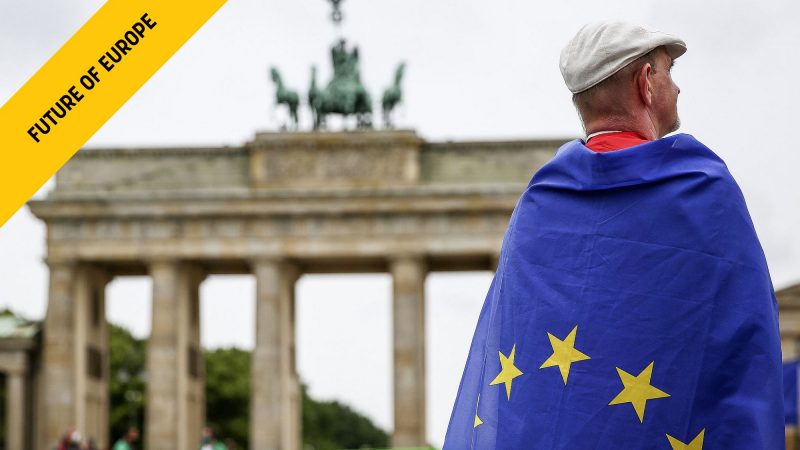 A supporter of the European Union draped in an EU flag is seen in front of the Brandenburg Gate in Berlin, Germany, 1 July 2020. [Omer Messinger/EPA/EFE]

Given the disparate views, interests and risk perceptions among the twenty-seven EU countries, far-reaching innovations to be introduced by the Conference on the Future of Europe appear unlikely, writes Michel Leigh.

Michael Leigh is the academic director of European Public Policy at Johns Hopkins University’s School of Advanced International Studies in Bologna and a senior fellow at Bruegel in Brussels.

This Conference, which opened on 9 May, was originally proposed by France and Germany to fit in with their next elections. It was postponed by twelve months because of the pandemic and is now squeezed into one year instead of two. Its outcome is meant to coincide with President Emmanuel Macron’s re-election bid in April 2022.

So far, media coverage has been split between hype, warnings of pitfalls and varied suggestions.

The EU institutions, echoed by federalist lobbies and NGOs, are presenting it as a once-in-a-generation chance to advance the European project in a “bottom-up” way. This will transmit the views of European citizens to decision-makers in Brussels and national capitals. No one knows how these views could be distilled into concrete proposals.

The Conference’s concept note is a joint declaration, painfully negotiated by the EU’s main institutions, that is peppered with terms like “resilience,” “the green and digital transitions” “subsidiarity” and “proportionality”.

The use of Euro-jargon obscures the important underlying challenges. It emphasizes the EU’s remoteness from the citizens whose aspirations it claims to embody.

A top-heavy “governance structure” representing a host of political and institutional interests will filter ideas emanating from a complex network of “citizens’ panels” and a “multilingual digital platform.” When the Conference ends in spring 2022 national leaders will decide whether its conclusions warrant policy or treaty changes.

The main pitfall is that COVID-19 continues to rage across the continent as the Conference gets under way. Perceptions are still dominated by the slow pace of the roll-out of vaccines and of the EU’s recovery fund, whose macroeconomic effect pales by comparison with initiatives taken in the United States.

Millions of Europeans are facing a precarious existence and companies across the continent are threatened with closure, so there will be little enthusiasm for any European extravaganza that does not bring tangible benefits. This could give a new twist to the fortunes of Eurosceptic populists in upcoming elections.

Also open to question is the Conference’s representative character. Can the more vociferous and better organized segments of opinion that will claim attention be regarded as truly representative?

How will ideas from activists be received by the EU’s big battalions? The EU’s track record of acting on the basis of popular initiatives as permitted by the Lisbon Treaty is hardly encouraging.

Can the Conference address the future of “Europe”, as distinct from the EU, when participation is restricted to the twenty-seven member countries? This is an EU which has promised membership to Balkan countries whose vulnerability is attracting intervention by China, Russia and other outside powers.

The European Economic Area countries too – Iceland, Liechtenstein and Norway – have more than a passing interest in Europe’s future. The British Prime minister claims that his country has left the EU but not Europe. A geopolitical Union would surely do more for these countries’ views to be taken into account.

The topics set out in the joint declaration closely parallel the priorities of the current European Commission. To be sure, members of the public are free to raise other issues. Yet establishing a tacit agenda in advance seems inconsistent with participatory and deliberative democracy.

An informal straw poll of EU observers conducted for this article identified a mixture of potential conference topics. These went from public health to corruption and organized crime, electrified road systems and a new trans-Atlantic partnership.

Others opted for Europe’s place in the world, security and defence. Shoring up democracy is a popular theme, often under the rule-of-law euphemism. One respondent argued that fiscal union should be at the heart of the conference.

This diversity of themes reflects the fuzziness of the Conference’s goals. When everything is a priority then nothing is a priority.  The nearest the joint declaration comes to stating an overall goal is: “The European Union has to show that it can provide answers to citizens’ concerns and ambitions.”

The objective then is to secure a greater sense of appreciation of the EU on the part of its population by demonstrating the capacity to respond to its hopes and fears. This is a tall order for a diffuse body deliberating amidst the lingering effects of the pandemic and recession.

If the Conference is to recover from its faltering start and have a positive impact on public opinion, it must scale down its ambition and focus on a few areas that people care about most. Today these are mainly health and jobs. Mapping out detailed policy responses to global challenges is a task for decision-makers that is ill-adapted to a multilayered public conference.

The promoters of the Conference should avoid abstruse procedural questions and concentrate instead on tangible results. They should ensure that the Conference’s conclusions make plain in ordinary language how the EU can address at least some of Europeans’ most pressing concerns.

One response to “Conference on the Future of Europe: Promises and pitfalls”