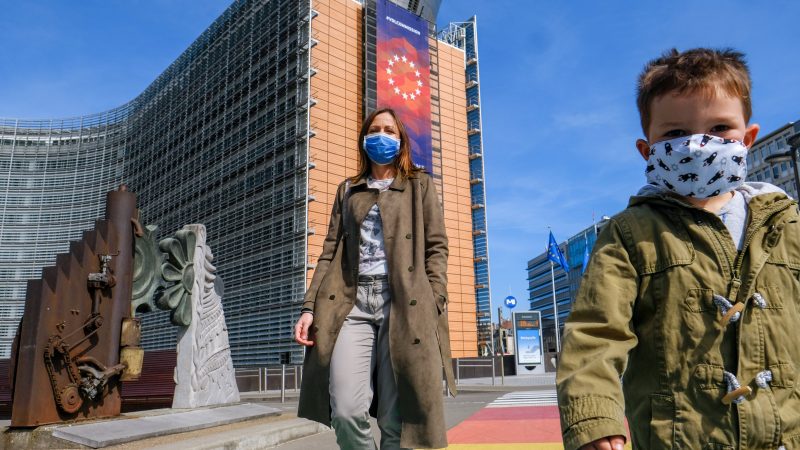 The management of COVID-19 cases seems to be working more on the basis of Darwin’s well-known theory of natural selection, where the strong survive, rather than on any European strategy, writes Bashkim Smakaj.

Bashkim Smakaj is the National Security Advisor to the President of Kosovo, Hashim Thaçi. He established and led the Kosovo Intelligence Agency (2009-2015). Smakaj is a PhD candidate on International Relations and an expert of security policy. The views in this article are his own.

The EU as one of the most advanced regional organizations in history, is likely to face a difficult challenge even after overcoming the global COVID-19 pandemic.

The 2009 Lisbon Treaty that was established with EU member states’ ratification after the period of disappointment that had gripped The Union with the failure of the ratification of the EU Constitution in 2005, was continuously described as the European Union’s deep reform treaty.

It was hailed as a treaty that would meet the needs of the union as a single body. But is it serving its purpose?

The situation created by the global COVID-19 pandemic, along with many previous situations that the Union has faced, is revealing the weaker points of this treaty and the need for a deeper reform within the EU.

It’s important to emphasize under this treaty, the EU, among other things, has a responsibility to prevent and manage epidemics, identify the source of the threat to public health and harmonize the public health strategies of the member states of the European Union.

However, the EU proved to be very clumsy in all its scope, which was also a mandatory mandate on European institutions.

Moreover, it has shown clumsiness in taking the necessary measures to prevent the spread of COVID-19 inside the EU, despite the fact that the spread was expected since the outbreak of this virus at the end of 2019.

The EU has never lacked regulations, guidelines or directives, but its greatest weakness in dealing with critical situations has always been the implementation of this legislative corpus – the conversion of theory into practice.

In its treaty, the EU has provided a sufficient legal basis to deal with such situations as COVID-19, namely Article 168 of the TFEU. It has the well-known comprehensive health strategy “Health for Growth 2014-2020”, (on paper), as for many other issues. It also has the social fund ESF and that even for the years 2021-2027, known as ESF +.

The EU Health Policy in place has three strategic objectives:

As for the first EU health objective, it is difficult to say that any positive result has been shown. This is evidenced by the results of numerous deaths of elderly people, such as in Italy, Spain and other European Union member states, where the whole challenge of confrontation has remained the individual responsibility of European countries, questioning the solidarity of EU as its value.

The management of COVID-19 cases seems to be working more on the basis of Darwin’s well-known theory of natural selection, where the strong survive, rather than on any European strategy for which citizens of the European Union have been paying taxes for years.

Unfortunately, the biggest contribution as European taxpayers undoubtedly are the citizens of the countries that today lead with the number of victims.

The European Union also failed to take the necessary measures to prevent this global pandemic, by staying extremely relaxed since the onset of this pandemic in the province of Wuhan in China.

It did not seem worried about taking swift action even after the spread of the pandemic in Italy, until it was too late and the virus had already invaded the continent. But it still failed to take uniform measures for all member states, leaving the whole battle to the individual efforts and capacities of the member states of the European Union.

There, unfortunately isn’t much difference regarding the fulfillment of its third strategic public health priority, as we saw the EU failing to support its member states in the face of the COVID-19 virus, to maintain a sustainable health system.

In a fast reaction, individual countries spent basic resources, especially human resources, on combating the pandemic that was already spreading at accelerated speeds. On the other hand, the allocation of assistance by the European Union to these countries is going as fast as a turtle.

It has been two months since the spread of pandemics in Europe and most countries have not yet been able to use European Union funds because of its bureaucracy.

What every country should understand is that even if you have the best strategies in the world, if they are not implemented at the right time and place, the situation will be just as bad as not having a strategy at all.

The EU may have extremely good standards of food and nutrition products, but even that is not enough to protect the health of the European population. What we understand from COVID-19 is that even a single person malnourished, anywhere in the world, poses a serious risk to changing the entire global order.

The EU is likely to have two alternatives after the end of the pandemic, the consequences of which are unlikely to be able to be calculated for quite a long time. The biggest optimist would say that in 2021 we may even have an idea of ​​what this virus has left behind.

The first alternative is to return to the origin. In an economic and trade union, from where it has achieved success, whereas, every other aspect remains the responsibility of individual member states as sovereign countries.

And the second option is for the European Union to undergo deep reforms and move to the next level – a level where the EU would be able to face all the global challenges as a single body, effectively and efficiently, no longer as a Mega Superstructure and Mega Super Administration moving at the speed of a sloth.