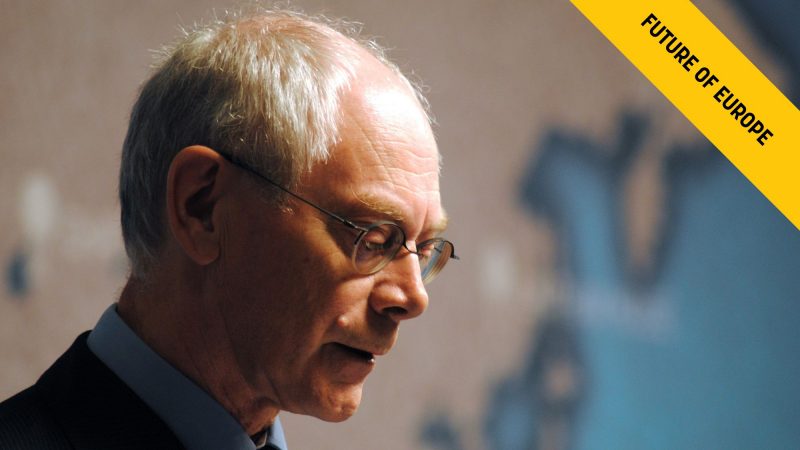 This is the first in a series of opinion pieces looking at key issues for Europe’s future that EURACTIV will be publishing in parallel with the Conference on the Future of Europe.

The Conference on the Future of Europe is an exercise in democracy, and at the same time, the main theme of the Conference is European democracy. But the problem is broader: democracy itself is in crisis, write Herman Van Rompuy and Žiga Turk.

Herman Van Rompuy is the President Emeritus of the European Council and former prime minister of Belgium. Žiga Turk is a professor, two-time minister in Slovenia’s government ,and former secretary-general of the Reflection Group about the Future of Europe.

The storming of the Capitol is only the most graphic wake-up call for all democrats worldwide and a culmination of continued activities to undermine the trust in democracy, in the US and elsewhere. The growing populism and authoritarianism, the violations of the rule of law right up to the EU itself, are symptoms of the crisis as well.

One of the reasons is that citizens are facing threats such as unemployment, financial uncertainty, irregular migration, climate change, inequalities, terrorism, COVID pandemic and others. They feel insufficiently protected on one hand and powerless on the other.

Faced with the ‘delivery gap’ since the start of the ‘multiple crisis’ in 2008, democracy is less and less a concept in which a part of the population look for solutions. Populists and strongmen are offering shortcuts. Instead of à conversation, a constructive competition of ideas, political dialogue degenerates into an irrational confrontation full of negative emotions.

Differences of opinion turn into unbridgeable oppositions, even hatred. Some leaders manipulatively incite this to polarise the electorate.

Constructive dialogue presupposes respect for the other and principled equality of political competitors. Democracy cannot exist without values, without real conversation at all levels of society and government. There has never been so much quality content, facts and opinions, available to people who are willing to look for it.

However, the social media also promote voicing emotions rather than thinking and rational dialogue. Despite hundreds of “friends” a lot of people are lonely and have no strong sense of belonging to any community.

Social media are not social. Disinformation and conspiracy theories offer detours from uncomfortable facts and difficult decisions. A minimum of trust is necessary for social cohesion and the proper functioning of a democracy.

Today there is mostly mistrust. Some is spread by foreign actors with a view to weaken our democracies strategically. The power of few social media companies to steer public debate has reached levels once unimaginable even for governments. The Commission has drafted legislation to address that but with respect to charters that protect freedom of thought.

The right decisions bring better results. Good results create trust and legitimacy. The member states and the EU must break out of the vicious circle which is the opposite of the just described.

The problem of the EU democracy is, of course, in the first place its lack of proximity and of the sense of belonging. The cohesive feeling of a demos, is one of the basic conditions for democracy.

Within itself, members of a demos are willing to exhibit a higher level of solidarity. With business and work commuting, a common currency, tourism, cultural exchanges, Erasmus schemes, even continental football league, European identity is slowly emerging. But too slowly for the problem at hand.

This process cannot be rushed. The younger generation who grew up in a more open world makes us hopeful.

Linked with the first is the second inherent handicap that European budgetary clout is quite limited. The Union budget is only 1% of GDP, one fiftieth of all public spending in our member states.

Moreover, this European expenditure is mostly not about transfers of income to families, which would allow people to experience the EU much more directly than the investments, agricultural or research funds.

However, none of the threats to people listed in the beginning can be solved without a strong European dimension. On the other hand, the Union is quite influential in its legislative and monetary capacity which can be used if there is a political will.

This was demonstrated once again during the corona crisis. During the first wave, many asked where Europe was, not knowing that the EU has little competence in health matters. During the vaccination phase, the EU institutions – although mistakes were made – became the scapegoats for the delays.

How to restore proximity in the EU, increase involvement of the citizens, and their sense of belonging?

This can be done through a direct dialogue with the citizens and with the elected representatives of the people. All kinds of techniques can help, from direct contacts to virtual ones.

Social media can finally become social and create online communities of acquaintances and not battlefields of strangers!

The Conference itself is planning all kinds of initiatives but if they remain a one-off, they are just a temporary patch to existing democratic structures. Instead, these must be permanently invigorated with community building with the citizens and among the European, national and local institutions.

The political mandataries beyond those of the European Parliament must also be permanently engaged. The procedures provided for in the Lisbon Treaty for the participation of national parliaments are formal and bureaucratic, but exist.

They must be exploited and even extended to other elected regional parliaments or councils. Annually, national, regional and local elected representatives should have the opportunity to express their views on the priorities of citizens and the strategic agenda of the institutions, on the State of the Union.

The local elected representatives alone number almost one million. Here too communities may emerge, rooted in the local communities but reaching to the European level.

This would address the risk that the preferences of many citizens and of European and other leaders would grow apart.

This would also address an estrangement between citizens and governments and a bureaucratisation of policies that can easily occur.

A dialogue implies that the concerns of others are listened to but also that policy makers are given the opportunity to explain their position. A dialogue in a community implies respect for the fellow members of that community.

There is no need to fundamentally change the current distribution of competences in the EU and what the treaties say about it, but as a complement, one should foresee more involvement of all elected representatives of the people. Europe belongs to, for and by everyone.

It is not normal that there should be populist parties so strong to recognise the sensitivity of the migration issue in the population. Every political level performs better when it feels the pressure from below. In our age of the Internet, of direct communication and instant gratification, elections every four or five years are not enough.

Existing institutions and procedures must be augmented with more direct, more frequent, and more permanent interaction. If politics is isolated from the concerns of the people, if it reacts too late, polarisation, bitterness, resentment, and even hatred gain ground.

This engaging approach must also be adopted by all other actors in the democratic society. Political parties, government and non-governmental organisations too should seek closer interaction with their stakeholders so that they too grow into effective communities of people.

There is thus a link between the functioning of democracy and policy outcomes. Process and results go hand in hand. Both dimensions are needed to restore or strengthen the legitimacy -input and output- of democracy as a political system. Time is running out. The populist danger has not disappeared, even in any country.

The Conference must produce results that are tangible to people and not get bogged down in institutional debate, in a new Convention, in ‘Brussels’ power play, or power play between the Union or the members.

People must feel their concerns are heard and the will for rapid improvement.  The ambition to fundamentally revise the Treaties may well end up with ‘less Europe’ instead of the much-needed better Europe’.