EU must make stand against Hungary’s contempt for European values 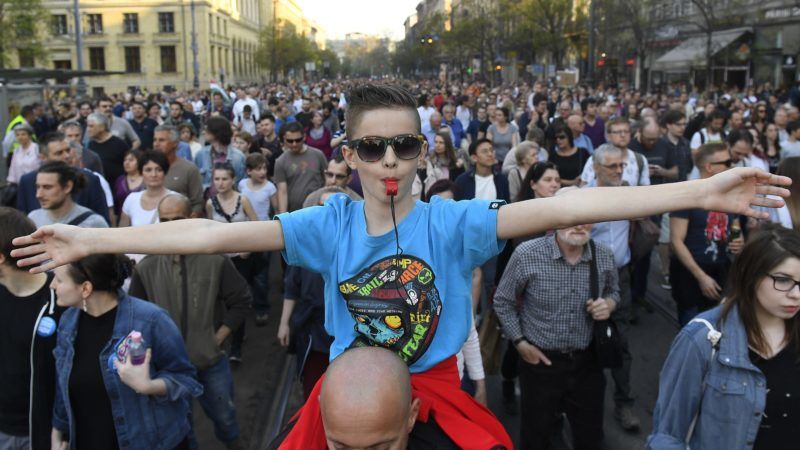 Participants attend a protest rally organised by the Freedom for Education movement, called CEU Now, Who's Next ? Protest for the free education in downtown Budapest, 2 April 2017. [Tamas Kovacs/ EPA]

The Central European University has been a beacon of European values for over two decades but is now under threat from the Hungarian government. Budapest’s machinations are also completely contrary to the spirit of the Rome Declaration, warns Chrys Margaritidis.

Chrys Margaritidis is dean of students at the Central European University in Budapest.

On 25 March 2017, the leaders of 27 EU member states signed the Rome Declaration. Among other things, this declaration expressed their strong commitment to European values such as “peace, freedom, democracy, human rights and the rule of law”.

It also pledged their strong intention to strive for a “Union where young people receive the best education and training and can study and find jobs across the continent”.

The goal is to create a union “that is safe and secure, prosperous, competitive, sustainable and socially responsible, […] where citizens have new opportunities for cultural and social development and economic growth […] remains open to those European countries that respect our values and are committed to promoting them”.

Three days later on 28 March 2017, in an unprecedented move, the Hungarian government proposed legislation that singles out and targets one university, making its continuous operation in Hungary impossible.

The Central European University (CEU) is a centre of learning offering graduate-level education in the social sciences and the humanities.

Accredited both in Hungary and the United States, it has been operating in Hungary for 25 years. Its excellence in research is demonstrated by its world-class professors, its researchers and the span of its network of cooperations.

In addition to the values of open society and democracy, CEU’s mission emphasises “the pursuit of truth wherever it leads, respect for the diversity of cultures and peoples, and commitment to resolve differences through debate not denial”. Undeniably, CEU’s mission is an expression of European values.

The proposed legislation, which was submitted with complete disregard to Hungarian and international legislative norms, is discriminatory since it will only affect the operations of CEU and not any other university in Hungary.

The proposed modification to the higher education law will not allow higher education institutions accredited in an OECD country to operate in Hungary without a bilateral agreement between Hungary and that country.

The discriminatory nature of the proposed legislation is so obvious that the government has done little to deny it. It also makes CEU’s operation in Hungary impossible by setting conditions knowing that CEU will not be able to fulfil them.

The proposed law requires CEU to have a campus in the US. Despite that, this is not a requirement for many higher education institutions accredited in the US. Crucially, it infringes on CEU’s academic freedom by attempting to dictate who teaches at CEU and where that teaching happens.

Academic freedom has been a core European value ever since Socrates was accused by the Athenians that his teaching was corrupting the youth.

Later, it was a crucial element of the great European research universities. Recently, academic freedom was deemed necessary in developing strategies for a European knowledge economy.

Rule of law has been a founding block of the European Union from its inception, ensuring that there is a level playing-field among different actors and that no one enjoys preferential treatment and no one suffers from discriminatory behaviour.

It is clear that the Hungarian government is putting forward legislation that contradicts core European values and the European tradition, a tradition that Budapest purportedly seeks to safeguard. These values, academic freedom and rule of law, are also cornerstones of CEU’s mission.

This legislation is also against the spirit and content of the Rome Declaration, the document that will shape Europe’s future for the next 10 years.

The Rome Declaration stresses the importance of education in realising our common European goals. Forcing CEU to close its operation in Hungary directly contradicts this goal.

It is also hard to see how targeting and closing down one of the best universities and research centres in Europe promotes the goal of creating a prosperous and competitive Europe that provides opportunities for development and economic growth.

The current government has repeatedly shown its indifference towards European values, hostility towards a more unified European Union and disregard for EU institutions and policies.

Disrespecting the European Union, the Hungarian government is presently advertising its upcoming national consultation with a “Stop Brussels” campaign theme.

The proposed legislation is unprecedented in Europe; a European country is attempting to eliminate a university that epitomises all that European values stand for. It is deplorable and conflicts with the European tradition and vision for the future.

The outpouring of support from Hungary, Europe and around the world for CEU has been tremendous and is inspiring all of us working and studying at this great institution.

CEU is making a stand against those who are trying to undermine Europe. It is now time for Europe to make a stand too.