Europe’s new leaders are coming from the periphery 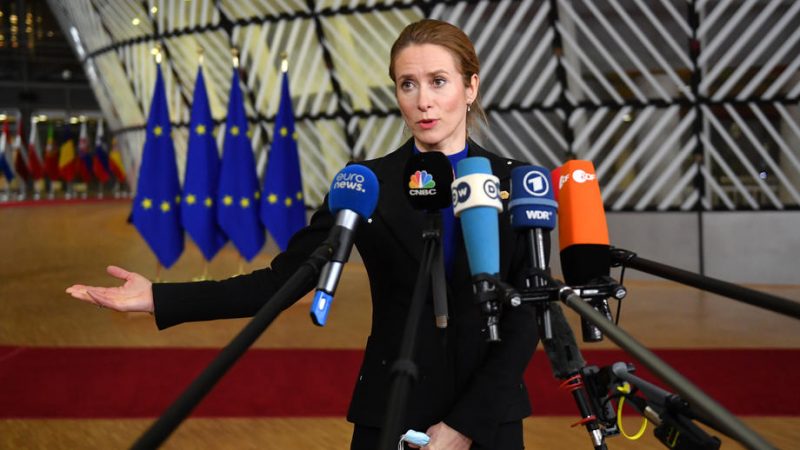 Estonia's Prime Minister Kaja Kallas speaks to press as she arrives for an emergency European Union (EU) summit on the situation in Ukraine at the European Council building in Brussels, Belgium, 24 February 2022. [EPA-EFE/JOHN THYS]

The construction of a new European architecture is underway, built around the point of relations with Russia – and new European leaders are shaping a new form, one we will live in and observe for decades to come, writes Orhan Dragaš.

Vladimir Putin launched an attack on Ukraine with many wrong assumptions, and as time passes, it turns out that there were many more than anyone thought. One of the biggest is that the EU and NATO would be divided.

That, in fact, was not Putin’s assumption, it was his investment, from which on 24 February he expected a dividend. Now we know he made a mistake, which may turn fatal. Because instead of widening divisions, a point has been reached at which the West is uniting and from which it is creating a new political, economic and security image of Europe and the world.

That point is Putin’s Russia. The construction of a new European architecture is underway, in which the attitude towards Russia is the main criterion of unity and a measure of alliance. It is measured by the readiness to stand for the values of Western civilisation and defend them from a Russian attack.

Not everyone was ready for such a standoff from day one, some are not even ready today. There have been many attempts to compromise and there are still some today, almost three months after Russia started the invasion of Ukraine.

The case of Admiral Schönbach, the commander of the German Navy, who said on the eve of the Russian aggression that Putin was only seeking respect and that he “probably deserves it”, has already been forgotten. Even his chancellor, Olaf Scholz, was hesitant over the fate of Nord Stream 2, an issue which threatened to seriously shake Western unity, possibly even torpedo it. Further, the German government continues slaloming when it comes to Russian gas.

Another European giant, France, is not different in essence. According to Volodymyr Zelenskyy, Macron recently asked Ukraine to provide Russia with territorial concessions in order to help Putin “save face”.

Maybe in some other circumstances, this rather shameful offer would have come to life. That would be possible in circumstances in which the most powerful Europeans, such as Germany and France, have the last word. But the war in Ukraine changed the status quo. The question remains whether Paris and Berlin became aware of the change.

New European leaders are on the scene. Their countries are not in the first circle of powerful and influential, but their instinct of recognising the direction in which this reversal is heading makes them today the leaders of the “new European order”. They understood without error that the new architecture is being built around the point of relations with Russia, and especially that the defence of Western values must be uncompromising.

One of the new European leaders, for example, is the Prime Minister of Estonia, Kaja Kallas. In simple, and therefore powerful words, she asks European leaders to stop talking to Putin. “Why are you talking to him? He is a war criminal. As long as you call him, he doesn’t realize he’s isolated. Don’t call him”, she said.

Can Macron and Scholz get a clearer message? It’s not just strong words. Kaja Kallas’s Estonia is the first EU country after neighbouring Lithuania to say it will stop importing Russian gas, not only because it is angry about the aggression against Ukraine, but also because it has been preparing for this for ten years and was securing supplies from other countries.

New European leaders are also the Prime Ministers of Finland and Sweden, Sanna Marin and Magdalena Andersson. Both come from the famous Scandinavian social democracy, but both firmly belong to the 21st century. Undoubtedly, they contributed to the fact that these two icons of European and global neutrality will officially join NATO.

All the discussions, in which those who do not want to join NATO held the majority for years, ended on 24 February. Sweden and Finland do not want to be alone next to a neighbour who has once again, in the most disturbing way, shown its aggressive and destructive nature.

New European leaders are also sitting in the new government in Sofia, led by Harvard student Kiril Petkov. They have very well recognised the shifts in world relations, and that is why they are uncompromising toward Russia’s aggression against Ukraine. Prime Minister Petkov and his ministers repeat that Bulgaria is also closing its doors to Russian gas and point out that if they, as the poorest EU economy, can do it, then everyone can. And that is a message addressed to Paris and Berlin who still believe that their greatness and influence give them the right to compromise with Putin.

This new leadership team, and there are few more, is right now reshaping Europe and the West into a new form, the one we will observe and live in for decades to come. If they had lived in the 1930s and 1940s, there is no doubt that they would have treated Hitler as Churchill did, without compromise and without mercy. At the time of the fall of communism, they were in primary school, but if they were the same age as they are today, there is no doubt that they would lead their countries toward Europe, the West and NATO. They would have no dilemma.

During their “shift” as leaders of their countries, they were caught in a historical turning point and they have been are coping perfectly with it. Their vision of the future is crystal clear and they have the ability to share it with their fellow citizens. With their attitude towards Putin’s Russia and its aggression against Ukraine, they opened a new era, ending a decade of the famous “lack of leadership” in Europe, as one of the main factors in its decline.

They do not come from large and influential centres of European decision-making, but they have enough authority to reset Europe to its peace-loving and liberal foundations. And they have already shown enough muscle to be able to defend what they believe in.