‘Ever Closer’ Union or ‘Ever Stronger’ Union? 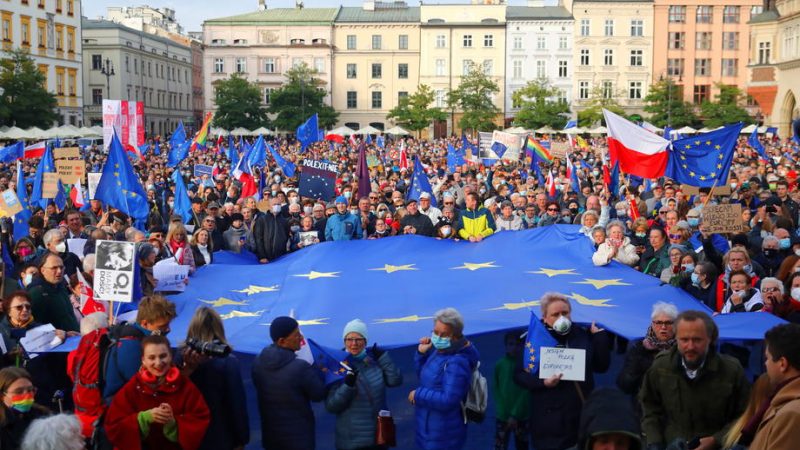 File photo. People carry a giant EU flag as they take part in a protest against the judgment of the Constitutional Tribunal on the Main Square in Krakow, Poland 10 October 2021. [EPA-EFE/ART SERVICE 2]

The 1648 Westphalia treaty stipulated that each state could choose its own religion and others would not interfere in its internal matters. This Westphalian approach is a way to live in peace and harmony with distant partners and among ourselves, writes Žiga Turk.

Žiga Turk, a professor, two-time minister in Slovenia’s government and former secretary-general of the Reflection Group about the Future of Europe, writes about growth, innovation, technology, sustainable development, creativity, and the future of Europe.

There are two futures of Europe. Since the Treaty of Rome, the Treaties have included the ambition to forge “an ever-closer union” among the people (not peoples) of Europe. And then there is George H. W. Bush‘s vision of Europe, “whole and free” and “at peace with itself” expressed in his 1989 Mainz speech.

The Russian aggression on Ukraine calls for a reflection on the two futures. Only a stronger union can be whole, free and at peace. Closer Union comes later.

The latest contribution towards an ever-closer union is the ongoing Conference on the Future of Europe. Thousands of citizens have been consulted and several smart ideas have been tabled.

Yet all this has been overshadowed by the brutal Russian aggression in Ukraine. That war is changing everything. Many nice ideas on social issues, digital revolution, democratic deficit, climate neutrality, etc. now seem secondary, even naïve, to the existential threat of an imperialist war.

Two hundred years ago, European peace was in the hands of France, Prussia, the Austro-Hungarian Empire, and Russia. The first three are happily sharing the table at the European Council. Russia is not.

We in Europe have not decided if Russia is a European country, and nor have they. Belarus, Ukraine, and Georgia are not free to choose their alliances. The remaining Balkan states are free to aim at EU membership, but the accession progress has been slow.

The UK has left, and there have been ideas about expelling Poland and Hungary for not meeting the liberal democratic standards. All this had been eroding Europe’s capacity to be whole, free, and at peace even before Russia invaded Ukraine.

Only after national sovereignty is comfortably secured, people can start flirting with supranational identities and the transfer of sovereignty to a European superstate. Which explains why sovereigntism runs stronger in former Soviet-occupied countries. They do not take independence for granted.

When Poland is literally on the frontline and accepting millions of Ukrainian refugees, the virtue-signalling resolution of 10 March of the European parliament, asking the Commission to punish Poland and Hungary for their democratic transgressions was poorly timed.

So, too, was starting the procedure against Hungary a day after the elections there had a “wrong” result. On the other hand, in a time that calls for unity, steps could be taken by Warsaw and Budapest to address the criticisms and iron out the differences. Viktor Orban should refrain from activities that could be interpreted as flirtation with Putin.

The enemy, after all, is not Brussels, it is Moscow. Standing united against this enemy is the key priority.

Warsaw and Budapest are not enemies either. Calling the governments of some democratic EU countries fascist, overnight sounds like Putin’s calling Ukrainians fascist.

The EU should be looser about handling matters internal to the member state, but closer in the issues of economy, security and strategic autonomy. Brexit is a good example how a push to make a union closer resulted in a union weaker by one nuclear power.

Fifty years ago Nixon travelled to China. Chinese “government affiliated media” (as Twitter labels them) remember this historic occasion much more vocally than the US.

The Chinese are quoting Nixon who had then said that China and the US should “build and new world order, in which nations and peoples with different systems and different values can live together in peace, respecting one another while disagreeing with one another”.

This recipe for peace is in fact a European invention. The Westphalia treaty of 1648 stipulated each state could choose its own religion and others would not interfere in its internal matters. This Westphalian approach seems to be what China is proposing today as a way to live in peace and harmony with the West.

These Westphalian principles could make the world a safer place. Those who play fairly, who have democratic institutions in place, where businesses are not an extension of state power, with those we could do business openly and freely.

With the rest we need to be quite a bit more careful – with foreign investment, technology exports, food, dependencies on energy, food, and raw materials.

This world needs a stronger European Union – more united as an economic union, with more united security policy, and a united pursuit of strategic independence.

United in this way, Europe will be more whole, more free, and more at peace. That we are close as peoples, as members of the same Western civilization, we very well know. We will be growing closer too.