Hijacked Europe: downward spiral or return to the roots 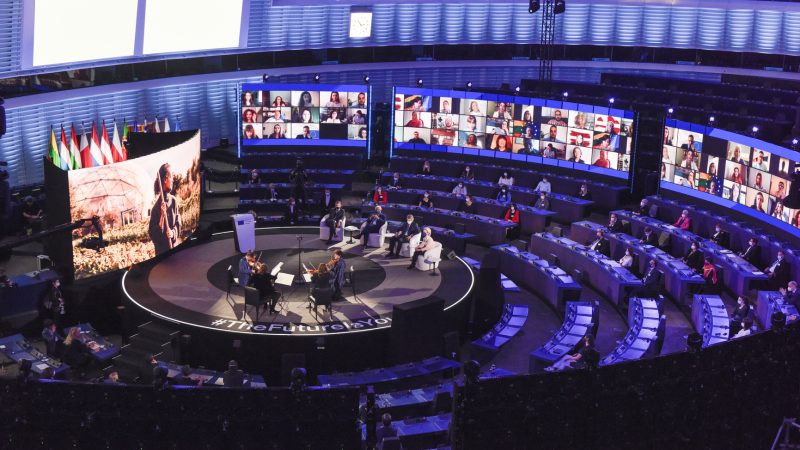 The Conference on the Future of Europe has done little to bring the EU closer to its citizens and is solely concerned with increasing the EU's competences, writes Janusz Saryusz-Wolski. [European Parliament]

The Conference on the Future of Europe (CoFoE) has done little to bring the EU closer to its citizens and is solely concerned with increasing the EU’s competences, writes Jacek Saryusz-Wolski.

Jacek Saryusz-Wolski is a Polish MEP for the European Conservatives and Reformist group.

In the EU’s bubble, there has been much hype about the Conference on the Future of Europe. It was advertised as a breakthrough event that would bring the EU closer to its citizens and allow them to have a more tangible influence on the EU’s future. Yet, after almost one year into the Conference, it has become painfully clear that CoFoE was never meant to realise such goals.

Despite the high hopes, CoFoE proved to be an EU’s Potemkin village that serves the interests of the centralised federalist project and epitomises the EU’s flaws and malpractices.

My political group in the European Parliament, the European Conservatives and Reformists,  joined the CoFoE in good faith and expected to have an open and candid discussion about the EU. However, throughout the conference, we have grown sceptical and concerned about the true intentions of its organisers and, therefore, we decided to withdraw from a conference which turned out to be a deceitful and manipulative endeavour.

In the CoFoE’s Joint Declaration, organisers stipulated that “[t]he conference is based on inclusiveness, openness and transparency”, yet, during CoFoE, these principles have been breached frequently. The mismanagement of the conference is very indicative and reflects a much broader and more serious problem that affects the EU.

For decades I have been closely watching the developments of the EU, and since 2004, as an MEP, I have been involved in the EU’s policymaking. What I have noticed during these years is that the “true” EU of sovereign states has been hijacked and replaced with one that is based on the distorted ideology of oligarchic federalism.

The process of hijacking European has been manifested in the centralisation and illegitimate accumulation of competences by EU institutions and their recurring disregard for the EU’s law by using double standards and instrumentalisation of EU’s values.

I contend that these harmful practices have deeper roots as they stem from the fact that the EU has drifted away from its founding fathers’ ideas and those enshrined in the Treaties. To be more specific, the current EU exhibits flagrant misalignment with the Treaties’ provisions concerning the principles of European identity, solidarity, and subsidiarity.

The EU’s identity is best captured by its own motto, “United in diversity”. The Treaty itself, in article 4(2) TEU, explicitly stipulates: “The Union shall respect the equality of Member States before the Treaties as well as their national identities, inherent in their fundamental structures, political and constitutional (…)”.

Yet, despite the existence of diversity-based European identity, today, we are witnessing top-down attempts to construct and impose artificial pan-European identity based on centralisation and partisan ideology. Moreover, the ECJ has been handing over rulings that venture into ultra vires areas and, thus, clearly violate the constitutional identity of member states.

In Poland, we are greatly aware of the power of solidarity. We also know that true solidarity can only be voluntary, and it requires a sense of community, a shared identity, and trust. Most importantly, solidarity is an indivisible value and must be applied holistically.

The current EU is gradually moving away from holistic solidarity and practices selective solidarity instead. It happens when the EU’s institutions allow the so-called ‘European values’ to be politically instrumentalised and used as punitive measures against selected members.

The principle of subsidiarity is stipulated together with the principle of proportionality in article 5 TEU, and it restricts the use of the EU’s non-exclusive competences to the actions that can “be better achieved at Union level”.

As a rapporteur on the Working Document on the Principles of Subsidiarity and Proportionality in the Parliament’s Committee on Constitutional Affairs, I argue that these principles are not being properly applied in the EU. It is disturbing to observe how the EU institutions strive for more centralisation and seizing more powers by practising so-called “integration by stealth” or “competence creep”.

I do not think that any positive future of the EU can develop on such flawed grounds as our Union’s current direction. Secondly, I strongly believe that to rescue the hijacked EU. We need to return to the original idea of the EU that rests on the balance and loyal cooperation between EU’s institutions and the member states and faithfully adheres to the provisions of the Treaties.

Pushing for a more centrally federalised Europe seems like a universal solution to every problem in the current EU – nevertheless, it is also a dead-end solution. It is also a false alternative to argue that we would have either more Europe or no Europe – it is about having a balanced, democratically legitimised Europe.

Moreover, the EU needs to strengthen its commitment to respecting principles of identity, solidarity, and subsidiarity. I firmly believe that such Europe is possible and necessary. This kind of Europe would be incredibly beneficial to the citizens, as it would ensure that their rights are respected and that they could enjoy peace and prosperity in the decades to come.

One response to “Hijacked Europe: downward spiral or return to the roots”