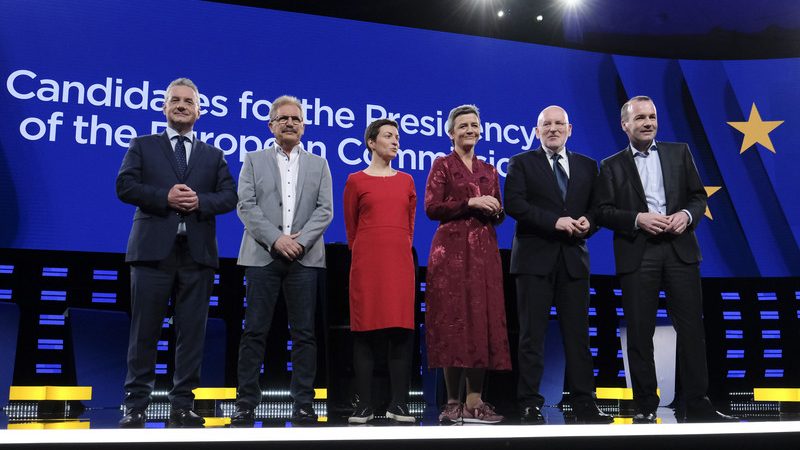 Political leaders may pay lip service to the Spitzenkandidaten system but it is unlikely to make much impact in the 2024 European election campaign, write Doru Frantescu and Dan Luca. EPA-EFE/OLIVIER HOSLET

Reports of the death of the Spitzenkandidat system may be premature. Reforms can revive it and give the process new legitimacy, argues Cristian Ghinea

Cristian Ghinea is a newly elected MEP from the USR – PLUS alliance, and co-chair of the Romanian delegation within the Renew group.

”I was the first and the last Spitzenkandidat,” says Jean Claude Juncker with his usual dark humour. He also stated that unfortunately, the Spitzenkandidat system has failed to become a tradition.

But is the Spitzenkandidat system necessarily dead?

The Spitzenkandidat was part of a bold and consistent attempt by the European Parliament to establish itself as a truly legislative institution, with the capability of appointing the head of the executive. What is a basic power in a traditional parliamentary democracy was, for the Parliament, a feature for which we have fought hard and still have not truly acquired.

The Spitzenkandidat system has been hailed by some as the endpoint of this battle. But it was not. It was unclear, unstable and defective at its core. It failed in its second application.

After the Lisbon treaty asked the Council to ”take into consideration” the European elections results when appointing the head of the Commission, the EP seized the opportunity to set a procedure that made it compulsory for the Council to organize consultations with the EP political groups before making any appointments.

It even took a step forward and proposed a system in which political groups would announce a few select candidates before the European election. This is the so-called Spizenkandidat system.

In 2014, the two biggest groups within the EP, which combined had a majority, made a deal and EPP was able to present a candidate backed by a majority.

But the deal was not accepted as such by the Council. Chancellor Merkel maintained the tension even after the deal between the EPP and the socialists was made public. The Council did not accept the Spitzenkandidat as a system before, or after the EP election.

At the end of this saga, the Council accepted Mr Juncker, but highlighted that it was his personality that made their acceptance possible (Juncker was a long-serving prime minister and familiar to the heads of governments on the Council).

In other words, it was not clear whether the Council accepted Juncker because he was the Spitzenkandidat or because he was Juncker. At the time this ambiguity made everybody happy. Each side had a face-saving outcome.

The EPP presented Mr Weber as the lead candidate, the socialists stuck by Mr Timmersmans and ALDE came up with five candidates in a formula called Team Europe.

After the election, both conditions that facilitated a deal five years ago were not met:

Let’s try to put ourselves in the Council’s shoes: the treaty states that it is the Council that makes the appointment (we may want to change the treaty, but this the situation now).

Is it realistic to expect the Council to accept a system in which it is expected to rubberstamp a name it receives from a political group within the EP? Especially when that name does not garner a majority in EP?

This was what the EPP group asked for in the most recent saga.

What made the entire enterprise more hopeless was the simple fact that the EPP got fewer votes and mandates in the 2019 election compared to 2014 (221 EP seats in 2014 versus 182 this year). Despite this, it declared itself the winner and adopted an uncompromising stance: Weber or nothing.

The European Parliament’s long-standing battle has a clear goal: the implementation of a parliamentary system to appoint the Commission President.

Let’s save the Spitzenkandidat system by making it more flexible.

Given the lack of transparency and the unstable trade horsing within the Council, it is difficult to be 100% sure that any candidate designated before the EP election would be acceptable.

But having a single candidate (elected by a group that only has a plurality) was a sure recipe for inter-institutional conflict and, frankly, it allowed the Council an easy exit. Let’s give them a multitude of choices, voted for by the citizens.

Why not have each political group propose 3-7 possible candidates and let them campaign, thus increasing the profile of the EP elections?

After the election, the trade horsing would then begin in earnest: within the EP to forge a majority and within the Council to see what candidates would be acceptable from those able to gain a majority in the EP.

This is already the reality: the same political families are represented both in the Council and in the EP and the interinstitutional negotiations overlap with the political ones. Why not make it official by having a pool of candidates from which the Council can cull?

Each political group would then exert itself to add big personalities able to win votes and to present a credible platform as Commission president to their lists. A political agreement between the EP and the Council should be signed stating that the Council will only select a candidate from the pool of people who run on the transnational lists.

In practice, the choices would be reduced to those truly able to carry a majority in the EP. Additionally, the game of results and negotiation will assure a balance between the EP and the Council.

Without such a deal, the Spitzenkandidat system will truly be dead by the next European elections. We will bear witness to a European Parliament without a mechanism to have its voice heard – a frustrated EP with the capacity to block a nomination. The Council will not be happy either.

It is vital to implement Spitzenkandidat 2.0 without further ado. The process will require a strong political commitment based on transparency and institutional respect between the European Parliament and the European Council. The Union and European citizens need it.