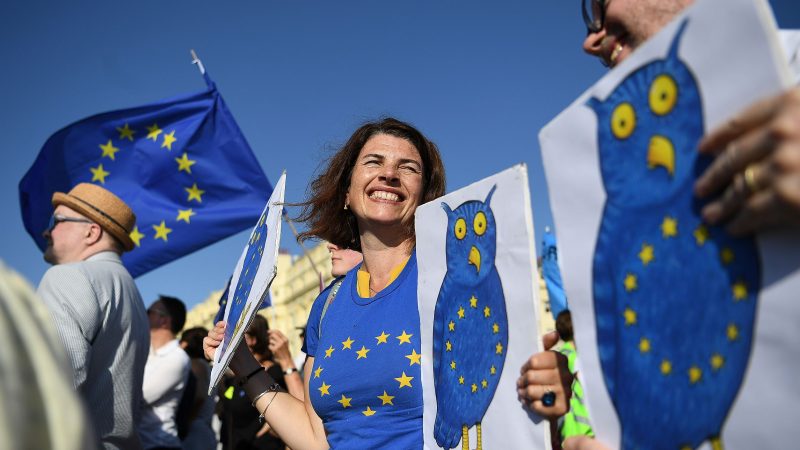 Brexit created such a shockwave that it questioned the future of the EU. [EPA-EFE/ANDY RAIN]

The EU is at a crucial turning point, it is now vital to give citizens the opportunity to take ownership of its project, Axel Dauchez writes ahead of the launch of the Conference on the future of Europe.

Axel Dauchez is the president and founder of Make.org, an independent, non-partisan civic tech whose goal is to engage millions of citizens on general interest topics in order to transform society.

An exceptional and unexpected citizens’ outburst echoed throughout the continent during the recent European elections with a significant increase in voter turnout.

Highlighting yet again the citizens’ desire to be actively involved in the very construction of the EU project and therefore confirming the legitimacy of the European institutions on this matter.

Just as the “awakening of mount Etna”, it could be the trigger for a game-changing chain reaction or the source of further disillusionment. Either way, the stakes not to disappoint the EU citizens, once again, are high.

At the same time, Brexit created such a shockwave that it questioned the future of the Union. All the while strengthening the bond of the remaining twenty-seven member states, and the will to finally find more common grounds.

Now, more than ever, they need to rise up to the global challenges ahead of them, such as climate change and protection of citizens and freedoms.

As 2020 marks the 70th anniversary of the Schuman Declaration, the launch of the Conference on the future of Europe is all the more significant. Will all the EU institution find the power to reconcile with citizens and come together in order to better serve the Union at the height of their new responsibilities?

“What is important is neither to be optimistic nor pessimistic, but to be determined” used to underline Jean Monnet.

Determined, indeed, is how this challenge should be tackled by the new EU leaders and member states. First of all, determined to maintain the overhaul ambition of this Conference without getting lost in internal debates and power struggles.

But more so, determined to massively engage the citizens themselves in this process, with authenticity and respect for institutional principles.

On this last point, the lineup for this Conference could be engaging millions of Europeans enabling them to commit for the rebirth of Europe. It could be the only acceptable answer to the hopeful success of the last election.

Without a real start, the democratic upsurge would have been nothing more than a flash in the pan, and this failure might have serious consequences for the future of the Union and its citizens.

Millions of EU citizens from all across the continent coming together to take a step further could be the appropriate answer. But success will not be achieved by aiming to only reach a select few through traditional methods.

Initiatives such as “WeEuropeans”, which enabled more than 38 million citizens to partake in the European conversation, should be seen as a concrete example of how to proceed.

The discussions are currently focusing on the physical debates, but they would cumulatively engage no more than 10 000 citizens.

This is why the Conference has the unique opportunity to start, in May, with a massive online listening phase, based on the EU Strategic agenda and policy fields, to enable tens of millions of citizens to get involved in inspiring the Conference’s on which agoras or dialogues, and other consultative councils, will be able to work in depth to feed the institutional decisions.

This is the only way to fully legitimise the whole process and to create a real “European momentum” driven by citizens from 9 May 2020, tackling together our century’s major challenges.

The EU is at a crucial turning point, it is now vital to give citizens the opportunity to take ownership of its project. Let’s all be determined!