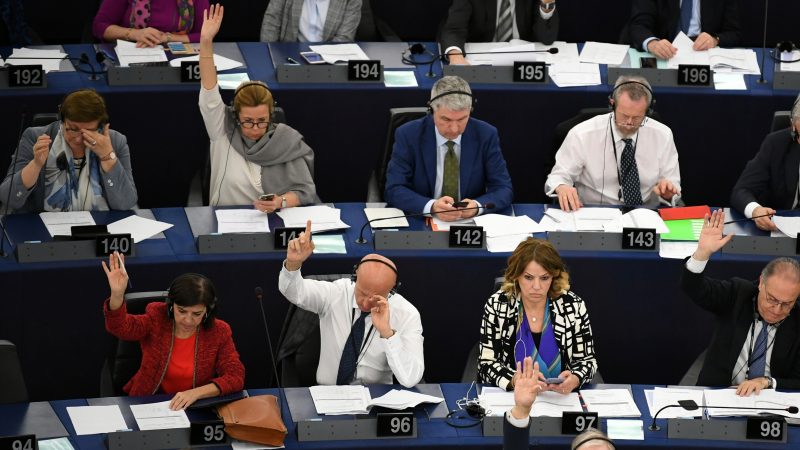 File photo. Members of Parliament vote on the copyright rules for the internet at the European Parliament in Strasbourg, France, 26 March 2019. [Patrick Seeger/EPA/EFE]

Nationalist parties all across the EU have long been feeding off the Union’s lack of democracy and are bound to jump on the way the new leaders of EU institutions are elected to reinforce their message, Louis Drounau warns.

Louis Drounau is President of EuropeanConstitution.eu and a member of Volt, for whom he worked on EU Reform and co-led their French campaign efforts.

Last Friday, despite long talks behind closed and particular heavy doors, heads of states and governments again failed to agree on names for the EU’s top jobs, first among which Jean-Claude Juncker’s replacement as President of the Commission.

Following the election of a particularly fragmented European Parliament in May, national leaders have been struggling to come to an agreement.

In 2014, the overwhelming control of the EPP and S&D, which included both the German Chancellor and the French President, had allowed for a smooth first use of the new Spitzenkandidat system: Jean-Claude Juncker was easily nominated by the European Council and approved by Parliament.

Five years later, the scenery has largely changed: the EPP and S&D have dipped to a combined 45%, liberal and green parties emerge victorious, and the French President is no longer aligned with his German counterpart. The stage is set for a political trench war.

But all was not off to a bad start: all major EU parties had committed to supporting the process and, despite a slightly rougher ride than in 2014, most of them – with the notable exception of then ALDE – elected a Spitzenkandidat, and it was not unthinkable that one of them would be handed the keys to the Commission. Yet, President Macron’s staunch opposition to the Spitzenkandidat process and to Manfred Weber’s candidacy have put an end to this scenario.

Added in vague language to the 2009 Lisbon Treaty, the Spitzenkandidat system aimed at linking the choice of the President of the Commission to the result of EU elections, thereby introducing some amount of popular democracy in the decision and doing away with previous inter-State backroom deals.

Alas, the burial of the Spitzenkandidat system by the heads of state and government – and with support from the leaders of the Socialist and liberal groups in Parliament – has led us right back to the same roller-coaster of negotiations that had created it in the first place.

And the consequences are severe. Nationalist parties all across the EU have long been feeding off the Union’s lack of democracy and are bound to jump on the current situation to reinforce their message. Citizens themselves have been continuously put out by a series of unknown EU leaders, to the point that we hail a meager 50% turnout as an unprecedented victory.

The intergovernmental negotiation itself fails to prove inclusive and, as often, gives undue influence to the EU’s larger economies. Declarations by Germany, France, Spain and the Netherlands make the headlines, and even the inclusion of leaders chosen by EU parties for the negotiations – Latvia, Croatia, Portugal and Belgium – makes it clear why Central and Eastern European countries are bound to feel left out once again.

From Bulgaria’s fight for an EU agency to Spain’s attempt to reclaim a spot in the limelight, the fight for the EU’s top jobs is now also doubling as a petty scramble for power and national interests.

Yet, between the rise of populist movements, large-scale social protests in France and elsewhere, and a continued disaffection by citizens for EU institutions, the democratisation of the EU is probably the single-most important project on EU officials’ desks, far beyond this or that regulation or directive. And it starts with a profound reform of our elections and the choice of our leaders.

Emmanuel Macron is right in saying that the treaties do not, per se, give Manfred Weber the Commission Presidency. Nor should they, as this would entrench a single-turn majority system, akin to that of Israel, that would most likely preclude a necessary political alternation for the foreseeable future.

However, the choice to forego the system altogether seems more based on political considerations – since President Macron hold a particularly strong hand in the European Council but has little clout in Parliament – rather than out of true concerns for democracy.

The Spitzenkandidat system is imperfect, but it aims in the right direction and we ought to reform it and continue pushing for more transparency and more democracy in the choice of our European leaders.

And the solution is not so complex: simply do what the vast majority of European states already do and embrace parliamentary democracy. In practice, have the European executive – the Commission – be chosen by the European legislature – the European Parliament. Nothing more.

With a proportional election carried out only a month ago, there is no doubt that our new 751 MEPs are more closely representative of the opinion of EU citizens than 28 heads of states or government elected mostly on national programmes. Although setting a final decision in stone is important in the long run, the European Council and Parliament only need an agreement outlining a voting mechanism and the Council’s commitment to nominate the winner of the election.

Relative or absolute majority, one or two rounds, open or closed election, ranking, point system, majority judgment; all options are on the table and have their respective advantages and drawbacks. They must be compared and discussed. Without a doubt, this would nevertheless remain an easier discussion than the current free-for-all.

Certainly this would not come without some opposition, but Parliament would be given political weight, Germany could argue that the system gives a fair chance to Manfred Weber, France could try and push for a French- or liberal-led coalition that may prove more consensual than an EPP lead, and smaller countries would be given a proportional voice.

Overall, the 2019 elections have forced the EU out of the comfort zone of its quasi-two-party system, and there’s no going back. Decision-making that had once been simple must now be juggled between a host of parties. The solution is to embrace the European tradition of parliamentary democracy and discover, at the EU level, the joy of coalition-making. A solution that can bring both transparency and democracy to EU citizens, and much-needed legitimacy to European leaders.