Long odds on a successful conference 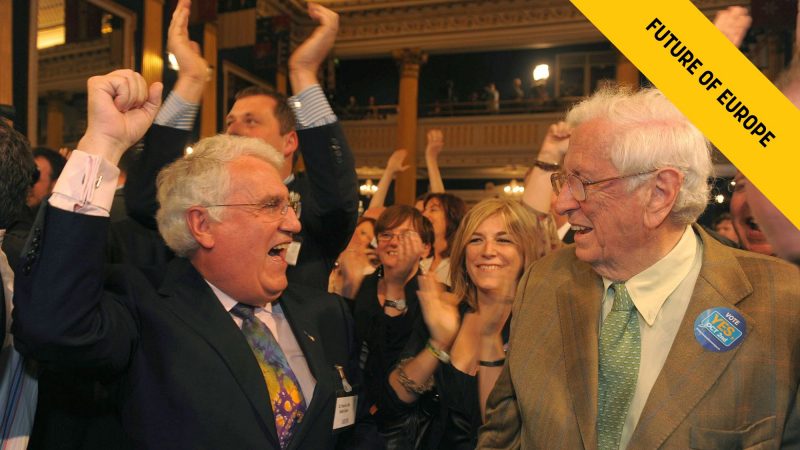 There is a parallel between the position in which the European Union is today and that in which Ireland found itself in 2001, following the rejection of the Nice Treaty in a referendum, writes Dick Roche, commenting on the Conference on the Future of Europe.

On the surface, the odds on the Conference on the Future of Europe producing a successful outcome do not look hopeful. Occasionally, however, even the most unlikely horse crosses the line first.

When President Emmanuel Macron mooted the idea of a Conference on the Future of Europe, there was considerable scepticism. Many took the view that the Conference would never get off the ground and that if it did it would be little more than another talking shop.

The long delay in putting together the arrangements for the consultative process and the inter-institutional squabbling that fed into those delays fueled further doubts about the prospects for the Conference.

Coming up with a blueprint that would pass muster within the diverse structure that is the EU was never going to be easy.  The Conference arrangements that have been put in place have been criticized as overly complex.

While the arrangements look clunky, a significant effort has been put into ensuring that there will be real involvement by civil society.

A digital platform has been created to allow citizens to participate in the work of the Conference, to share ideas and make online submissions.

The digital platform went live last month and within days close on 7,400 Participants had signed up over 1,425 ideas were submitted and 367 events were planned.  While not a tsunami this is a good start. Work is also underway on a series of European Citizens Panels that will formulate proposals.

The leadership structure for the Conference has been a sticking point. Rather than find a single high-profile figure to drive its day-to-day as happened in the Convention on the Future of Europe, the Conference will operate under a joint presidency of the European Council, Parliament and Commission.

The joint presidency is ‘supported’ by an executive board that will have three co-chairs from the Parliament, Commission and the rotating EU Council presidency. There has been much scepticism about this leadership arrangement.

While the overall organisational structure for the Conference is anything but elegant, with a ‘favourable wind’ and strong non-Brussels input, it could produce positive results.

The EU has had a series of wake-up calls in recent years.  Brexit is the most obvious. Mounting dissatisfaction with a Union that is continuously seen as Brussels centric, the open divisions amongst the member states, political polarization, the problems grappling with migration and the shaky response to the COVID pandemic have all undermined confidence.

There is a parallel between the position in which the European Union today and that in which Ireland found itself in 2001 following the rejection of the Nice Treaty in a referendum.

Despite the benefits of EU membership Irish voters did not turn out in the referendum and a majority of those who did turn up on the day of the vote, voted No.  This was a major wake-up call.

Polling showed that the defeat in the referendum was due to more voter turnout.  Irish citizens while positive about ‘Europe’ were not prepared to simply endorse a constitutional change on which they had not been engaged. The challenge was how to re-engage with the people.

While today’s EU faces a myriad of issues the essential challenge remains that of re-engaging with its citizens.

Following the defeat in the Nice Treaty referendum, the administration in which I served established a National Forum on Europe.

There was some scepticism about the Forum. Some saw it as a talking shop, others passed it off as ‘politicians trying to pass the buck’, to dodge making hard choices, colleagues at EU Councils questioned the wisdom of the entire process.

Against the expectations, the Forum broadened and deepened the Irish debate on Europe.

It forced political parties to explain and justify their positions on Europe, allowed myths about the EU to be challenged, brought the social partners into policy determination and paved the way for success in the second Nice Treaty referendum, allowing Ireland to ratify the treaty clearing the way for EU expansion.

The consultative model has been deployed again in Ireland in more recent years.  A Constitutional Convention established in 2012 produced proposals for a Constitutional change.

Arising from one of the proposals, Ireland in May 2015 became the first country whose citizens decided to enshrine a constitutional provision allowing same-sex marriage in basic law. Politicians were a minority in the Convention, its majority was drawn from the public.

A  Citizens Assembly was established in 2016,  with its 99 members drawn entirely from the public examined a number of contentious political issues including Ireland’s position on abortion.

The work of the Assembly paved the way for another major constitutional change lifting Ireland’s constitutional prohibition on abortion. A new Citizens Assembly established in 2019 is examining the issue of gender equality was. Again 99 members are drawn at random from the public.

Ireland’s experience gives some basis for optimism that the deliberative approach built into the structure of the Conference on the Future could deliver. The Conference has networks available to it on which it can extend its reach into the community in all parts of Europe: it should actively use those connections.

The focus of the Conference’s work, particularly in the early days should be on the concerns of Europe’s citizens rather than on the preoccupations of Brussels: there is a diversity of views across Europe’s 27 member states, all must be given a hearing.

To conclude with another horse racing metaphor, the Conference needs to ‘pace’ its operations: it must avoid ‘rushing the fences’.

One response to “Long odds on a successful conference”