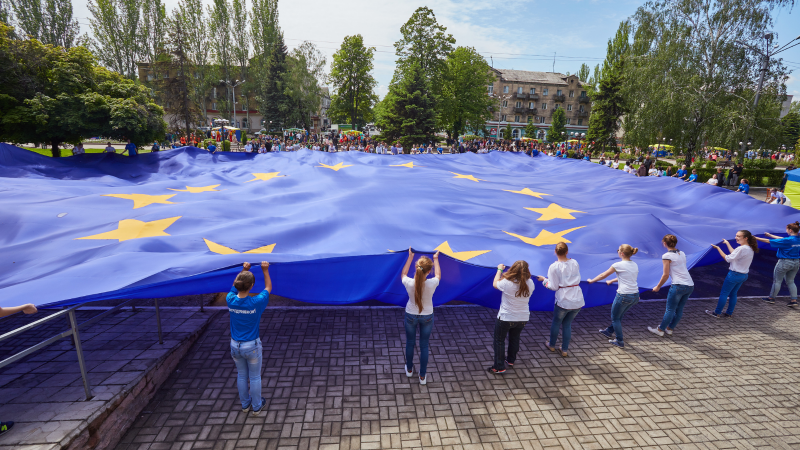 Pokrovsk, Ukraine - May 19, 2016: Celebrating the Day of Europe in the Ukrainian city of Pokrovsk

Europe Day is supposed to mark the conclusion of the Conference on the Future of Europe (CoFoE). One year of deliberations, debates and discussions brought together citizens, regional, national and European politicians, EU institutions, organised civil society and social partners, to build a common trajectory for the EU’s future, writes Petros Fassoulas.

Petros Fassoulas is the Secretary General of the European Movement.

This unique, innovative process of deliberative and participatory democracy put citizens at the heart of the decision-making process. Many were apprehensive at the start. But the Conference has taught us that our democracy can only be strengthened by fusing the work of elected representatives with the contributions of citizens and organised civil society at large.

The pan-European panels of citizens have been the most precious innovation of the Conference. The randomly selected citizens came together from all corners of our Union and from all walks of life, they worked with energy, tenacity and resolve to put forward proposals that were disarmingly purposeful.

Citizens see Europe as a solution to the challenges they are facing. And for that reason, they want an active role in making the decisions that affect them, both through reforming European elections and by making citizens panels a permanent feature of EU decision-making. They want a Union with more competences, that speaks with one voice and that ensures that Member States work together to protect our health and environment, defends our values and rights and pursues a socially just and inclusive Europe that leaves no one behind. They want to simplify the way institutions take decisions, while making the rule of law non-negotiable. They did not shy away from supporting Treaty changes to achieve what they aspire to.

Last but certainly not least, they call for greater autonomy, in energy among others, as well as deeper integration in the area of defence and security, to promote peace, security and stability, all the more pertinent in the wake of the war in Ukraine.

But this is not the end. It is not even the beginning of the end. It is simply the end of the beginning, to quote Winston Churchill, who presided over the Congress of Europe in 1948, the original “Conference on the Future of Europe”, which, among many things, gave birth to the European Movement. The Conference gave us the opportunity to change Europe. The recommendations recently adopted and presented today to the Presidents of the 3 EU institutions are profound and commonsensical in equal measure. They have the potential to transform our continent, strengthen our democracy and empower the EU to defend the rights and values that underpin what we call the European ideal.

Nevertheless, there is a strong sense of trepidation because of the lack of clarity about the next steps. One thing is certain. We cannot allow the recommendations to gather dust in some report on a forgotten shelf. They belong to everybody, both the institutions and citizens as well as civil society. They need to survive in their entirety and be taken forward.

For this reason, especially as Europe is fighting against autocratic forces, in defence of our values, a concrete follow-up to the Conference’s proposals is of the utmost importance. And what better way to do so, than by holding a Convention, charged with building on the Conference’s work and delivering the policy, legislative and Treaty changes necessary to make its recommendations a reality.

The future is carved in times of crisis. We have the opportunity to rise above our challenges, fix our gaze upon a better Europe and work together to achieve it.

Now is the time to be ambitious and audacious.