By Giles Merritt | Friends of Europe 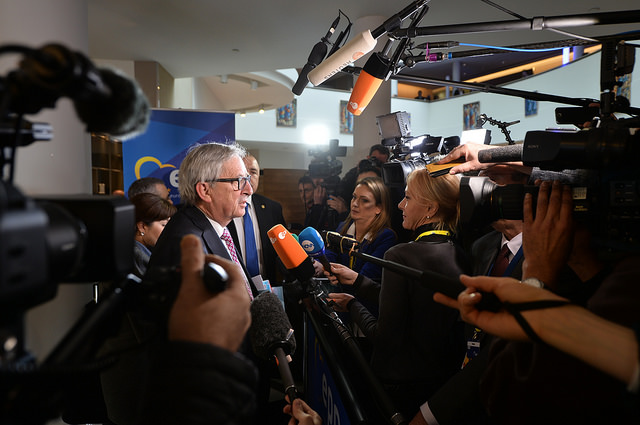 Bad news, in this case, is best for Europe. [EPP/Flickr]

A fatal weakness of the European Commission is its officials’ faith in good news. Their misguided thinking is that by trumpeting what they think are the EU’s most positive aspects they can counter escalating eurosceptism, writes Giles Merritt.

Giles Merritt is Secretary-General of Friends of Europe. This opinion piece was taken from his new book, Slippery Slope: Europe’s Troubled Future.

This is wrong, and not just because it clearly doesn’t work. It’s wrong because, as everyone knows, good news is no news at all. Stories about the minutiae of EU regulation and the positive economic contribution they make may be of interest to small groups of specialists. But for the rest of us, they’re simply more red tape from Brussels.

Bad news, on the other hand, is grist to the mill of journalists, and not only to those accredited to the EU institutions. Spelling out Europe’s weaknesses tells people why closer integration is vitally important. We all know that Brussels is often blamed for national governments’ shortcomings, and underlining these as bad news would show who really are the foot-draggers.

Here are half-a-dozen worrying factoids which point to a downward path for Europe, but could be firmly addressed by stronger EU-level action.

Some of these are based on research by bodies like the World Bank and by consultancies like McKinsey or Accenture. A good many are to be found in forward-looking studies by the Commission itself, including the warning that unless we Europeans pull our socks up we’ll see our share of the global economy shrink by mid-century to 15% from today’s 26%, a far cry from 35% in 1970.

Much of Europe’s bad news is home-grown and fixable. The executive has warned that by 2020, the digital revolution will mean that a third of all jobs need degree-level skills. As with so many of its reports, this hasn’t been given the alarm bell status it deserves. Analysts at Germany’s GIZ organisation reckon that by 2050 there will be 50 million unfilled high-tech jobs in Europe because EU countries aren’t turning out nearly enough graduates.

Education is surely a crusade the European Commission should be leading – after all, its Erasmus university student-exchange programme has been hugely popular. Tightly linked to this is the warning that two-thirds of the top executives surveyed by Accenture think that by 2023 China will have overtaken Europe in industrial innovation.

EU policymakers have long urged member governments to put their money where their mouths are on R&D, but have made little or nothing of this kind of damning opinion from the boardrooms of Europe. A sustained information campaign and a ‘naming and shaming’ league table of under-performing countries would hit home, but that’s not in the Commission’s DNA.

Other signposts that underline the need for the EU policies long resisted by national capitals range from energy to taxation. Within 20 years, Americans will be paying 40% less than Europeans for their electricity, and the Chinese perhaps half. The industrial implications are profoundly worrying, but again Brussels is content to conduct its ‘energy union’ debate in technical language that public opinion can’t follow.

As for tax, national governments insist this must stay a ‘no go’ area for the EU. So when the Commission comes up with research showing that shifting tax from labour to consumption would create 1.7 million new jobs and boost output by €65 billion, no one listens.

Yet job creation for young people is so urgent that surely the Commission should constantly challenge practices that impose almost half of all taxation on employers and employees, about a third on consumption where we all have free choice, and less than a fifth on capital.

A stronger focus on Europe’s structural weaknesses is badly needed, whether or not that displeases national politicians with their electoral preoccupations. So let’s hear more bad news from Brussels!