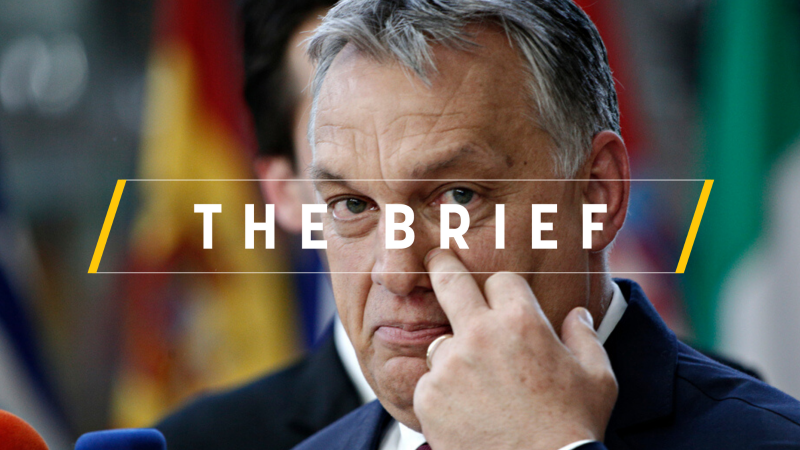 A proud and convinced Christian, Orbán has been trying to provide European society with what he says is a Christian shield against the threatening challenges of a globalising world.

He is such a strong believer in Christian values that he’s been blocking an EU migration and refugee deal for years now. He has even put up a wall along Hungary’s southern border to block war-fleeing migrants, the vast majority of them Muslims, from entering his sacred territory.

(It’s even possible that the long-awaited new Dublin regulation for asylum seekers is ready but the Commission hesitates to present it, fearing Orbán would use it as a bargaining chip in the Recovery Fund talks).

But – and this is something we’ve already seen elsewhere – Orbán’s Christianity has its limits. He is a Christian crusader only as long as no one touches his like-minded authoritarian colleague, Turkish President Recep Tayyip Erdoğan, incidentally leader of the eighth biggest Muslim country in the world.

Erdoğan has recently decided to turn Istanbul’s Hagia Sophia, a UNESCO World Heritage site, into a mosque. Constructed as a cathedral in the Christian Byzantine Empire 1,500 years ago; it was converted into a mosque after the Ottoman conquest of Constantinople in 1453 and then became a museum in 1935.

The new conversion triggered strong reactions worldwide: from Pope Francis and the Orthodox Church to politicians across Europe, even including leftist atheists.

One voice of dissent came from the UK, which was always a staunch advocate of Turkey’s EU accession while it was an EU member. London said it was a sovereign issue of Turkey.

And Orbán? Not a peep yet.

EURACTIV has contacted the Hungarian Permanent Representation to the EU and the Hungarian ministry of foreign affairs, as well as ‘Hungary Helps’ – a government agency that provides humanitarian assistance, with special attention to persecuted Christians – for comments on the reconversion of Hagia Sophia but received no reply.

The EU’s top diplomat, Josep Borrell, said after a meeting of foreign affairs ministers on Monday that there was “broad support to call on the Turkish authorities to urgently reconsider and reverse this decision”.

We’ve been told several countries broke ranks… One of them might well have been Hungary. Had the UK stayed in the EU, it would most probably be among them.

And now we come to the interesting part. With the mighty political shield of London removed from the EU scene, we may soon find out who has been hiding behind it all these years, especially when it comes to foreign affairs.

What is not clear is whether this will make things easier or more difficult.

‘Normandy format’ talks on the Ukraine crisis will be a priority for Germany during its presidency of the EU Council, German Foreign Minister Heiko Maas told a meeting of the European Parliament’s Foreign Affairs Committee (AFET) while presenting Berlin’s EU Council presidency priorities.

EU foreign affairs ministers decided to explore ways of easing tensions with Turkey in the Mediterranean, warning at the same time that Europe will not hesitate to pick the sanctions option if the situation deteriorates.

Five days before an EU summit that could adopt a historic EU budget and a recovery fund, Italian Prime Minister Giuseppe Conte met Angela Merkel in Berlin. Both support a generous aid fund and both want an agreement at the weekend. But for Conte, the economic survival of his country is at stake.

The UK has excluded Huawei from its future 5G network infrastructure, the government announced. The Chinese telecommunications firm immediately urged Boris Johnson’s administration to reconsider the decision, seen as a substantial setback for its business in Europe.

And check out this week’s edition of the Transport Brief and Vlog.

3 responses to “The Brief – Orbán’s Christianity has limits”