The Brief, powered by EPRA — All is well, Madame la Marquise 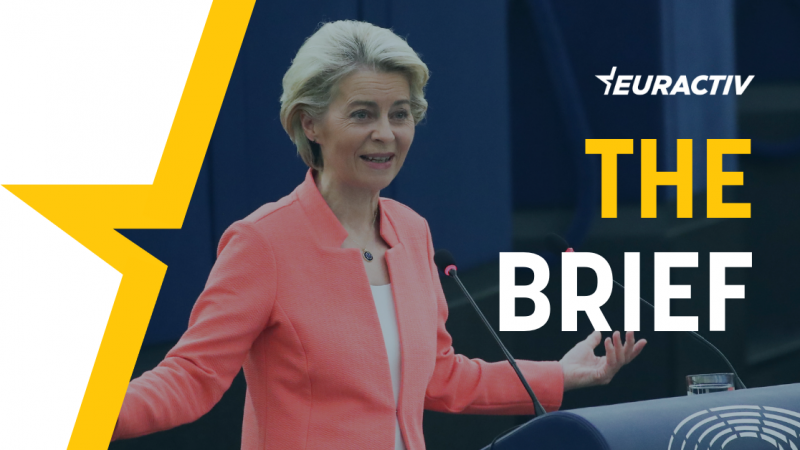 The author of the Brief was reminded of this 1936 song by Ray Ventura by Ursula von der Leyen’s 2021 State of the Union speech before European lawmakers in Strasbourg.

Sugar-coating reality is typical of totalitarian regimes. This writer is old enough to have seen regimes collapse after having painted “des lendemains qui chantent”, the better tomorrows, for the masses. Those tomorrows eventually arrived, though not in the form authoritarian leaders had presented.

The EU is not totalitarian, it is not authoritarian. It is just politically correct, and this also implies a straitjacket, but of a different kind. The EU also cultivates hypocrisy at the higher degree.

Here is an example from the speech. Von der Leyen said: “We stand by the Afghan people, the women and children, prosecutors, journalists and human rights defenders”.

All fine, but she didn’t say the EU will offer them asylum. She said: “We will coordinate all efforts with member states to bring them to safety. And we must continue supporting all Afghans in the country and in neighbouring countries”.

In other words, Afghan women and children are welcome – but somewhere else.

Despite having used the keyword “soul” ten times throughout the hour-long speech, which was short on humility, von der Leyen hasn’t fooled many.

As we have written, the highlight of her speech was what she presented as the success of her Commission in handling the pandemic and the vaccination programme.

Of course, the rich EU got plenty of vaccines but it hadn’t been able to create a single one of them, a fact which von der Leyen omitted to mention.

The EU served itself first when it could. Initially, however, the UK was faster, humiliating for the EU in the context of Brexit. Then the EU imported more vaccines from South Africa, although it already had plenty, while Africa’s own vaccination rate is at a meagre 3.5%. But von der Leyen didn’t go into that either.

Sweeping issues under the carpet is another way of saying “all is well”.

There was no word about the blocked candidacies of Bulgaria, Romania, now also Croatia, to join the passport-free Schengen area. This blockage is the shape of things to come for future big initiatives, such as the announced EU summit on defence under the French EU presidency.

Von der Leyen was very diplomatic about one of the main issues the EU faces: the worsening rule of law situation in Hungary and Poland.

In fact, she did speak about rule of law but didn’t mention either country by name. Which probably means that Viktor Orbán and Jarosław Kaczyński will feel encouraged to continue subjugating their peoples and undermining the Union.

Enlargement – such a lonely word in today’s EU – was absent from the speech. Von der Leyen said she would visit the Western Balkans shortly, to “reassure” them that they are not forgotten, but the word enlargement was not mentioned.

Von der Leyen took up her post in 2019 promising a “geopolitical EU”. Well, she scored a record of sorts: in the entire speech, there was not a single mention of Russia.

If the geopolitical EU doesn’t see Russia, or pretends it doesn’t see its biggest and most powerful neighbour, this is hardly reassuring for Europeans. As for Turkey, there was one single mention, in a well-chosen uncontroversial context.

China was mentioned twice, in a positive context (climate change and its growth potential).

But there was another section of the speech where China, though not explicitly mentioned, is the real reason why the Commission will put forward the ‘Global Gateway’ strategy. Not completely new, the previous Commission called it “connectivity” versus “Belt-and-Road”.

EU communication is a difficult art. Von der Leyen gets some of the best advice money can buy. If this speech is the best communication the EU can produce, the money of EU taxpayers was badly spent, “tout va très bien” is certainly not the right message.

To produce a good speech, you need to go out and meet people. The peoples of Europe. In a year when they are supposed to be consulted about Europe’s future…

This speech wasn’t important. Von der Leyen can do much better.

In case you missed it, the State of the EU was today. After European Commission President Ursula von der Leyen’s secondary address, political group leaders had the chance to respond. A resounding theme of their statements was that despite “a lot of buzzwords” in von der Leyen’s speech, “what we expect now is action.”

Throughout her address, the Commission president announced multiple funds and plans for the upcoming year. We’ll break them down below:

Alongside HERA, which will be up and running next year, von der Leyen announced a €50 billion “Team Europe” investment to strengthen the European health union, which will be fulfilled by 2027. She said the new investment would ensure that “no virus will ever turn a local epidemic again into a global pandemic”.

The EU chief also revealed the new European Chips Act, which is expected to help Europe regain its autonomy and global leadership in semiconductor chip production. Internal market Commissioner Thierry Breton said the act is a “strong geopolitical and economic signal” regarding Europe’s position in the technological sphere.

Von der Leyen emphasized the importance of closing the climate financing gap before November’s COP26 UN climate summit, as developing countries are most affected by the climate crisis but also least equipped to tackle it. The EU currently provides $25 billion per year in climate finance, but von der Leyen announced Thursday that it would provide an additional €4 billion in hopes that other western countries will do the same.

The Commission president presented a more ambiguous stance on European defence, stating that “it is time for Europe to step up to the next level” regarding the Union’s military capacity. She failed to go into specifics, though, such as how or when these changes would occur.

Okay, looking for some non-SOTEU news? Us, too.

New research from Climate Action Tracker (CAT) warns that only Gambia is on track to deliver climate action in alignment with the 1.5°C goal of the Paris Agreement. Seven nations, including the UK, are categorized as “nearly sufficient,” meaning that they could likely reach the threshold with “moderate improvements.”

Russia’s energy ministry is expected to release information in the coming days about the possibility of Rosneft exporting natural gas to Europe via the new Nord Stream 2 pipeline. Exports are much more lucrative than domestic sales, but Kremlin-controlled Gazprom currently has exclusive rights for Russian pipeline gas exports.

And as the German general election nears, the EU is gearing up for the fight over the revision of the Works Council Directive. Like many of Germany’s political stances, the fate of workers’ representation comes down to which political coalition gets to govern.