The Brief, powered by EPRA — Laying down the law 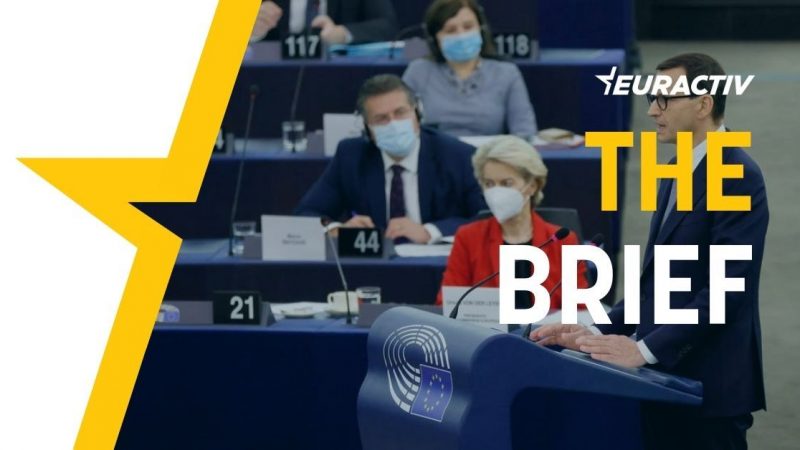 To its critics, the European Union is an all–powerful bully. In reality, the European Commission often gives the impression that it couldn’t fight its way out of a paper bag.

Those of us who believe that, for all its flaws, the EU is a force for good, really wish that sometimes it would flex those muscles it supposedly has.

The ruling by Poland’s Constitutional Tribunal that parts of the EU treaties are incompatible with the Polish constitution is a direct challenge to the functioning of the EU.

Yet after a two-hour discussion about the rule of law on Thursday evening, EU leaders appear to have, once again, come up with the square root of zero.

“To put it bluntly, not much”, was the answer of Belgian Prime Minister Alexander De Croo when asked what had been achieved.

The EU’s main power brokers, France, Germany, and Italy, called for more dialogue. Germany’s Angela Merkel, now firmly established as Europe’s premier stateswoman, mooted the idea of a grand philosophical discussion on what EU membership means as part of the Conference on the Future of Europe.

As a rule, leaders do not like to publicly chastise each other. But this reluctance leaves the Commission in an impossible position. As the guardian of the treaties, it is legally and duty bound to either take its own legal action against Poland or, better still, simply refuse to disburse the €57 billion Warsaw has requested to fund its post-COVID recovery plan.

Hungarian Prime Minister Viktor Orban continues to frame the rule of law dispute as a culture war, claiming that Poland is the victim of a ‘witch hunt’. This needs to be called out for the arrant nonsense that it is.

It is also worth pointing out that unlike in the UK pre–Brexit, there are large majorities in favour of EU membership in Poland and Hungary. Aside from the politics, they know that their economies rely on access to EU funds and the single market.

There can be no compromise about the rule of law or, indeed, about whether EU law has supremacy over national law. That is what countries signed up to when they decided to pool sovereignty as EU members. Without it, the EU would fall apart.

If Poland and Hungary really want to leave the EU, which they really don’t, the bloc should retort that no one is stopping them from leaving. ‘Best of luck, folks, and can we have our money back?’ The UK is Europe’s second-wealthiest country but it is finding out that, as predicted, Brexit has left it worse off in economic terms.

It is time for the EU to summon some self–confidence, stop cowering and lay down the law.

For all the details of the two-day summit of EU leaders, which concluded shortly before the publication of the Brief, check out our LiveBlog.

NATO Secretary-General Jens Stoltenberg called on the EU on Friday to cooperate more closely with the military alliance after the latest EU defence efforts in recent months raised concerns of a parallel structure that might be competing with NATO.

A group of European countries agreed with the United States to withdraw their digital taxes. The move by Austria, France, Italy, Spain, and the United Kingdom follows an international tax deal that aims to allocate parts of the profits from highly profitable, big corporations to countries in which revenue is generated.

With EU leaders set to discuss migration and the situation at the EU’s eastern border with Belarus on Friday, Eastern Europeans are expected to ask for a review of the bloc’s legislation to reflect the ongoing crisis.

As algorithms continue to have an ever more crucial role in the workplace, lawmakers are concerned over their influence on workers’ rights and wellbeing. A risk-based approach to Artificial Intelligence regulation tries to tackle this challenge, but is it enough?

The Luxembourgish government announced on Friday (22 October) it will allow its 620,000 inhabitants to grow cannabis for personal use.