The Brief, powered by GIE — 57 billion reasons to avoid Polexit 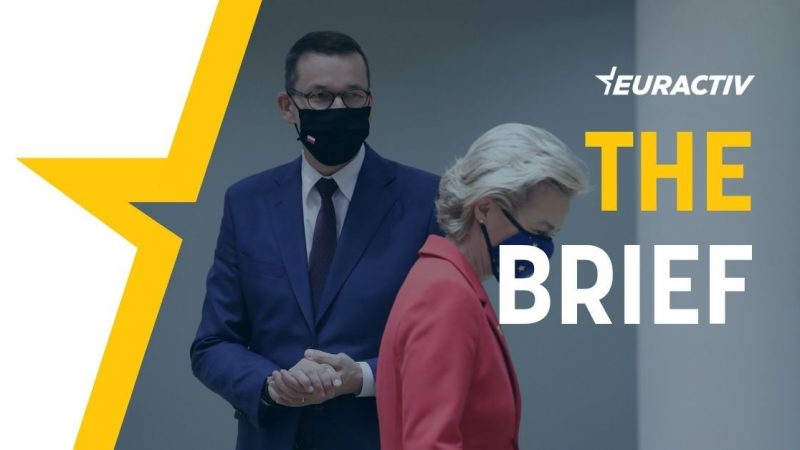 In politics, it’s always a good idea to get others to do your dirty work. For Polish Prime Minister Mateusz Morawiecki, by challenging the principle of the primacy of EU law, one of the main building blocks of the Union, his national Constitutional Tribunal has earned its corn and landed a major blow for Eurosceptics.

The ruling itself, however, was not surprising. Politicised courts such as Poland’s Constitutional Tribunal, which is now dominated by judges sympathetic to Morawiecki’s Law and Justice party (PiS), tend to produce politically motivated judgements.

It took some real brass neck for the Tribunal judges to complain of ‘progressive activism’ by the European Court of Justice.

After years of battles with the European Commission over the rule of law, and judicial independence in particular, Morawiecki may believe that playing hard ball is the way to go.

But is he seriously contemplating that Poland should leave the EU? If so, that defies economic and political logic.

More likely is that he wants Poland to stay but on its own terms. This approach, known as the ‘having your cake and eating it’ path, has already been trodden by the UK and we all know how that turned out.

As David Cameron found to his cost, if you spend your time continually bashing the EU and its institutions, it becomes that much harder to get others to plead your case when you want something.

The European Commission, meanwhile, has no option but to stands its ground, both over its rule of law dispute with Poland, and the status of EU law. Hungary and other members of the EU awkward squad are looking for any sign of weakness from the EU executive.

Once you insist that national law takes precedence over EU law, it is a slippery slope towards the exit door. The single market and the four freedoms cannot function without the supremacy of EU law

So, after Brexit comes Polexit? Probably not.

For one thing, Polish public opinion has much more residual pro–Europeanism than the UK ever did.

Besides, while a generation of UK treasury ministers bemoaned its status as a major net contributor to the EU budget, Poland is one of the bloc’s main financial beneficiaries. In the immediate term, it has 57 billion reasons not to walk out. That is the price of its economic recovery plan, which the European Commission has yet to approve.

Morawiecki may calculate that, with the bruises from Brexit still fresh, the Commission will cave rather than risk the prospect of another country leaving the bloc. After all, losing one member state is unfortunate; losing a second looks like carelessness, if not something more serious.

But as bargaining chips go, it is pretty weak. It is hard to avoid the conclusion that Poland needs the EU far more than the other way around.

Twelve EU member states have called for an update the bloc’s Schengen Border Code to allow ‘physical barriers’ as border protection measures, according to a letter sent to the European Commission and seen by EURACTIV.

Ireland dropped its opposition to an overhaul of global corporate tax rules on Thursday (7 October), agreeing to give up its prized 12.5% tax for large multinationals in a major boost to efforts to impose a minimum rate worldwide.

A populist billionaire at odds with the European Union who featured in the Pandora Papers is the narrow favourite in Czech elections starting on Friday (8 October) that promise a tight result.

Forestry ministers of six EU countries strongly criticised the European Commission’s forestry strategy following an informal meeting in Vienna this week, saying the Commission had not sufficiently respected the principle of subsidiarity.

As always on Friday, check out our weekly Digital Brief to stay up to date on all things digital.

One response to “The Brief, powered by GIE — 57 billion reasons to avoid Polexit”