The Brief, powered by Goldman Sachs – Two visions of England, and Europe 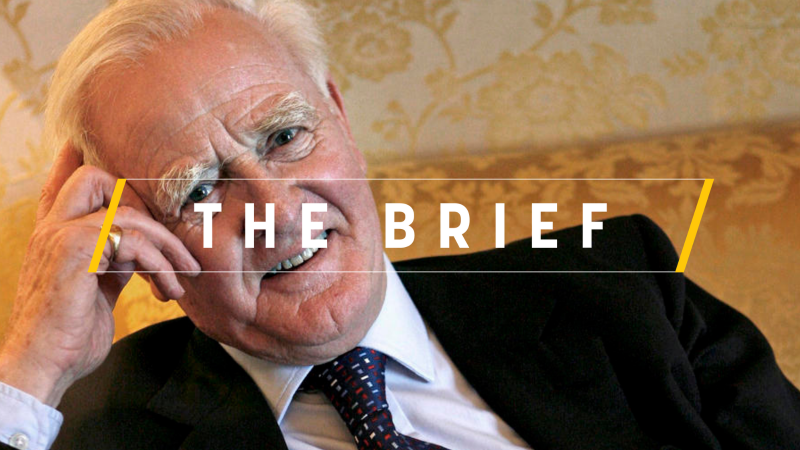 Aside from being great yarns, Europe and the project of European integration lie at the heart of the best work of the great spy novelist, John Le Carré, who died on Saturday.

“Britain’s departure from the European Union in the time of Donald Trump, and Britain’s consequent unqualified dependence on the United States in an era when the US is heading straight down the road to institutional racism and neo-fascism, is an unmitigated clusterfuck bar none,” says one of the characters in ‘Agent Running in the Field’, Le Carré’s last novel.

He offered a different, grimier version of England than Ian Fleming’s James Bond novels which achieved mass popularity several years before Le Carré hit the mass market with ‘The Spy who came in from the Cold’.

Product placement and consumption is as rampant across the pages of the Bond novels as it is in the films that have spawned a multi-billion pound industry.

Bond is handsome and exciting, and the escapism and glamour that he offered readers in the late 1950s and 1960s bears some similarity to the sense of adventure offered to Britons by Boris Johnson’s Brexit project.

The Fleming novels are great fun. Alas, as a character, Bond is also a two dimensional fantasy.

Conversely, there is precious little glamour in Le Carré’s descriptions of the spy world. Instead, they are stories of treachery and moral ambiguity in which flawed and conflicted spies defend Britain and the West in the full knowledge that their actions are part of a grand picture of protecting societies that are almost as ugly as those of the Russian enemy.

If there is any geopolitics in the Fleming novels, though it is in very scarce supply, they are primarily about UK-US ties.

An apathetic conservative, Bond is probably a Brexiteer, though he might not have bothered to vote. Le Carré’s unlikely hero, George Smiley, a scholar of German art and literature, is unquestionably a Europhile.

Le Carré said that Smiley’s dream was to see a unified Europe which helped him justify his actions during the Cold War: “The dream he had was of a second Reformation, and of a great, peaceful, democratic Europe.”

Like Smiley, the EU institutions are flabby, riddled with imperfections, easy to ridicule and hard to love. But he is real while Bond is a fantasy.

“My own ties to England were hugely loosened over the last few years,” confessed Le Carré in an interview last year, referring to his sadness about the Brexit referendum and what has followed.

He is not alone. But his vision of England, and its place within Europe, will outlast the gung-ho jingoism of Johnson and Co.

The European Commission will unveil a broad set of regulatory measures clamping down on global digital giants, as part of two landmark texts that will overhaul the operation of the platform economy in the EU.

The European Commission will unveil plans to finance cross-border energy infrastructure, as pressure builds on the EU executive to provide funding only to clean energy projects that will accelerate the transition to climate neutrality.

When the European Commission and African Union set up a 12-person joint rural Africa taskforce in May 2018, their priorities were to promote African food security, transferring skills, climate change adaption and investment in the continent’s agri-business.

Russian President Vladimir Putin congratulated Joe Biden on his victory in the US presidential election, after Biden won the state-by-state Electoral College vote that officially determines the US presidency, the Kremlin said.

Seven major truck manufacturers pledged to stop selling fossil-fuelled vehicles by 2040, just as a landmark new study made the case that hydrogen should play a major role in powering heavy-duty transport in the coming years.

The ViaRhôna, a green and heritage-filled 815-kilometre long cycling route in southeast France, has received more than €2 million in EU funds during the 2014-2020 budget period  because of its environmental component.

4 responses to “The Brief, powered by Goldman Sachs – Two visions of England, and Europe”