The Brief, powered by Greens/EFA – Return to the Dark Ages 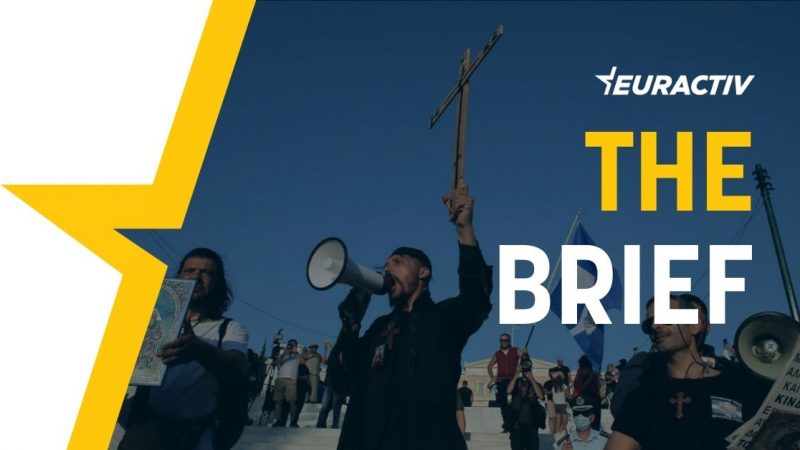 Thousands of demonstrators gathered across Greece this week to protest against the government’s push to effectively make immunisation against COVID-19 mandatory in order to lead a normal life.

Proudly holding Christian crosses and waving Greek flags, anti-vaxxers made their voices heard and expressed their support for the view of the Greek Orthodox Church, that vaccination should remain a free choice.

But they inadvertently also sent another message: that a part of Europe still lives in the Dark Ages. Nationalistic rhetoric, of course, was there as well. “This land does not belong to anarchists and Bolsheviks,” some protesters chanted.

Rather than judge the education or IQ level of these people, this Brief aims to point at the responsibility of mainstream parties, which have managed to stay politically afloat either by indirectly mobilising these people, invoking an external threat, or by simply treating them as “useful idiots.”

However, apparently blinded by their short-term political objective, these political parties tend to forget that the masses will always hit back, at some point, in keeping with the old saying: “They that sow the wind, shall reap the whirlwind”.

Many analysts in Athens suggest that the anti-vax protesters who turned out this week were the same ones who flooded Greek streets to protest the 2018 name-change deal between Athens and Skopje – a sensitive national issue that hit on a raw nerve.

Back then, as now, Greek flags and Christian crosses dominated mass demonstrations against an external enemy. That time, it was Greece’s tiny Balkan neighbour, North Macedonia.

The only difference back then was that those protesters were silently backed by the then opposition New Democracy party, which also opposed the name change deal.

When it took the power, New Democracy pragmatically changed its position and accepted the deal. But the protesters did not change their mentality – they just found another enemy to vent their anger at and justify their their raison d’être.

The vaccine debate is just their latest cause. The only political party in Greece that currently opposes vaccination is the populist Greek Solution, led by Kyriakos Velopoulos and affiliated with the European Conservatives and Reformists in the European Parliament.

Velopoulos has previously appeared on TV to sell herb-based creams, which he claimed could minimise the risk of contracting COVID-19.

After he became party leader, he openly opposed mandatory vaccination and demanded that other Greek lawmakers show their vaccination certificates in parliament.

Those more inclined towards the progressive political camp could easily be tempted to say that this New Right represents Europe’s new Dark Ages.

In the name of Christianity, they sow confusion, stoke fear and claim a monopoly on the idea of what a good Christian should represent, which in their minds also includes closing the doors on refugee women and children from Muslim countries.

The Church, Catholic and Orthodox alike, has a unique chance to take its distance and clarify what Christian values are. But decisions such as the one by the Greek Orthodox Church, that vaccination is a free choice, definitely do not lead the discussion in the right direction.

Hungary’s Prime Minister Viktor Orbán accused the European Commission on Friday (16 July) of “legalised hooliganism” for launching an infringement action against measures taken by his government that the EU executive said discriminated against LGBT people.

We are seeing the biggest protests against Cuba’s Communist regime in decades. Thousands of Cubans, chanting “freedom” and calling for President Miguel Diaz-Canel to step down, joined street protests from Havana to Santiago last weekend. Read more in our Global Brief.

A Turkish coastguard vessel fired warning shots Friday (16 July) at a Cyprus police boat on patrol for undocumented migrants near the line of control off the island’s north coast, Cypriot media reported.

In Germany, e-government and open data remain largely untapped potential despite holding enormous economic opportunities and being a basic prerequisite for smarter cities, according to a recent study by the Organisation for Economic Cooperation and Development. EURACTIV Germany reports.

Last but not least, like every Friday, don’t forget to check out our weekly Digital Brief.

One response to “The Brief, powered by Greens/EFA – Return to the Dark Ages”