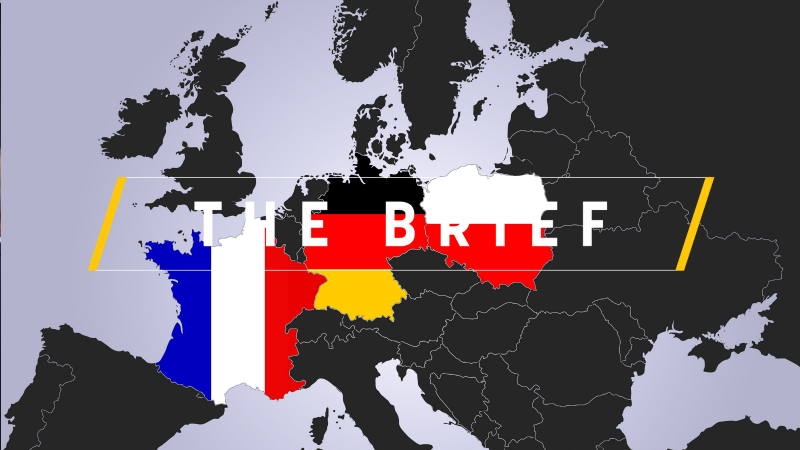 In February, French President Emmanuel Macron said during his maiden trip to Warsaw that Brexit would require a new dynamic among the remaining members of the bloc.

Macron then announced a summit with Poland and Germany as part of the so-called “Weimar Triangle” framework that has fallen out of favour in recent years. It was meant to happen by July at the latest – raising hopes of renewed cooperation and trust between the EU’s east and west – but there has been no confirmation yet.

Although 2004 saw the triangle become a forum for consultations ahead of European negotiations, the last proper meeting between the leaders of the three countries took place in 2011.

One of the few achievements in the years thereafter was when ministers Fabius, Steinmeier and Sikorski met in Kyiv during the Ukrainian crisis in 2014 to negotiate a post-crisis solution between then-President Yanukovych and the opposition. This produced an agreement which put an end to violence and marked the start of political transition.

In reality, today, the format is more a triangle of difference, and not just because of the dispute between Warsaw and the European Commission over the rule of law and reform of the judiciary.

On migration and climate issues, the positions between Paris, Berlin and Warsaw couldn’t have been, and can’t be, more divergent.

Although Warsaw is interested in completing the EU’s common market and the continued enlargement of the EU, it is very sceptical about deepening integration in the manner favoured by Berlin and Paris.

And relations with Russia remain one of the major foreign policy wedges between the three countries.

Poland has in recent years started to see the benefits of being part in several cooperation initiatives and formats at the same time:

It is a member (and current president) of the Visegrad Four, the relatively new Three Seas Initiative comprised of 12 EU countries located between the Baltic, Black and Adriatic seas, and the Bucharest Nine, a group of NATO’s nine eastern members.

But the most influential grouping for Warsaw remains the Weimar format with France and Germany.

France and Poland squabble over the fundamentals of European defence policy and the bad blood caused by the cancellation of the sale of Caracal helicopters to the Polish armed forces in 2016 and “buying American” instead.

Germany and France, meanwhile, have their own marital problems.

The ‘Franco-German tandem’ created after centuries of hostility, as leaders initiated a process of reconciliation in the 1950s which ultimately led to the signing of the Elysée Treaty in 1963, has been stumbling in the past decade.

The 2019 Aachen Treaty, meant to further strengthen relations between the two countries, could change that perception.

One thing no German would say out loud (but secretly knows is the truth) is that without France, it might be difficult for Germany to form alliances and find the necessary majorities in Europe, especially thinking about Berlin’s plans for its six-month EU leadership.

Cooperation inside the triangle is asymmetrical and the prospect of deepening cooperation in this format seems unlikely – in a zero-sum calculation it appears to offer more benefits to Poland than to Germany or France.

But each of the three parties has an interest in reviving the format: Germany, to achieve geographical unity in the six months of its EU presidency; France, to convince the other two of the need for steps towards deeper integration; and Poland, to secure economic benefits and influence foreign and security policy decisions.

If Germany is serious about more Europe, now would be the perfect time to revive it.

Germany takes over the rotating six-month Presidency of the Council of the EU on 1 July. This responsibility comes at a time when the EU is facing unprecedented challenges and expectations of Germany’s leadership and diplomatic skills are higher than ever. Watch our video explainer here.

The COVID-19 pandemic risks creating new problems and uncertainty for potential applicants to the UK’s EU Settlement Scheme and those who have already been given pre-settled status, citizens’ rights groups have warned Boris Johnson’s government.

Almost two-thirds of EU lawmakers do not report meetings with lobbyists, according to a Transparency International (TI) analysis of collected data on lobby meetings published by MEPs on the European Parliament website.

International donors pledged $7.7 billion in aid to face the ongoing humanitarian crisis at a Syrian aid summit co-hosted by the EU and the United Nations.

Mercosur hopes to finally sign by the end of this year the association agreement with the EU reached in June 2019 after two decades of negotiations, Paraguay’s Foreign Minister Antonio Rivas declared.

As the summer kicks in and EU countries have been easing travel restriction, our reporter decided to experience what it is like to travel during a pandemic by flying from Brussels to Malaga in Spain.

The European Commission has laid out ambitious new goals for upskilling and reskilling the bloc by 2025, including the objective of ensuring that 70% of the EU adult population has basic digital skills.