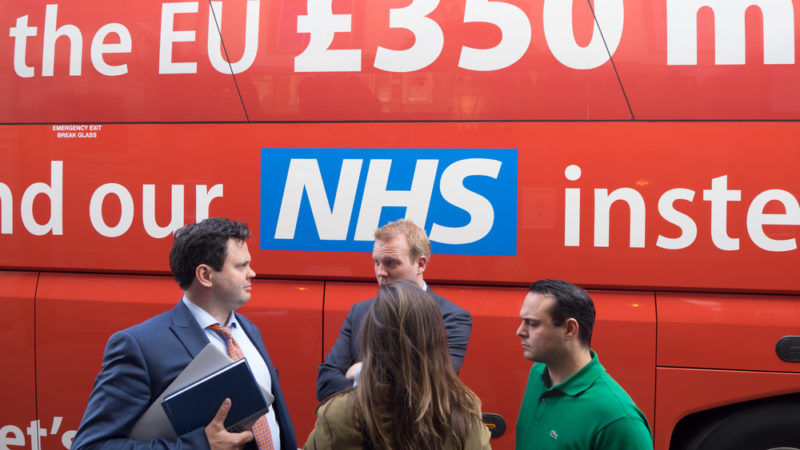 The now infamous Brexit bus is an example of one of the Brexit campaign issues the Remain camp should have reframed. [Jakub Janek/ Shutterstock]

Cian McCarthy is a Master of Arts in Law and Diplomacy student at Massachusetts’ Tufts University.

Throughout and since the Brexit campaign in the UK, we constantly heard of the “benefits and obligations” of EU membership. You can’t enjoy the benefits without bearing the obligations, our leaders would say.

Eurosceptics argue that access to a larger economic market is not worth the burdens of unrestricted immigration, overbearing regulations and loss of judicial autonomy.

Pro-EU campaigners argue that we should accept these costs, as they are heavily outweighed by the many gains to society that the EU brings about.

The fatal mistake that the Remain campaign made was to engage in this argument in the first place. Europhiles should not accept that the free flow of people, the harmonisation of standards across the continent and the supremacy of the European Court of Justice are “burdens” to be borne by EU countries.

Accepting this characterisation not only puts the pro-Europe side on a much weaker footing, but it also forgoes the opportunity to make a positive case for the true benefits that those so-called obligations actually lead to for all EU countries.

The Brexit battle may have been lost by the Remain camp, but there are many, perhaps more consequential, conflicts looming on the horizon. Pro-EU groups in France, Germany and the Netherlands—three of the founding members of the EU project—are facing stiff competition from anti-EU political parties.

It’s time that those wanting the survival of the EU engage in the battle to reframe the debate.

Modern politics is littered with examples of effective framing. Consider the term “tax-relief”. Who do you think benefits more from this becoming a familiar phrase: those who want to lower taxes, or those wishing to raise taxes to increase government spending?

The word “relief” implies that some suffering or hardship will be relieved, presumably by a benevolent leader. If those wishing to raise taxes accept the phrase and try to argue against tax-relief, they are fighting a losing battle.

Similarly, by engaging within the framing that certain aspects of EU policy are obligations, rather than benefits, EU supporters have conceded a potentially effective argument for the continuity of the European Union.

Once it has become customary to call immigration an obligation, any discussion of immigration will only favour those who want to stop the free flow of people. But what if we changed to rules of the game and refused to engage with these frames?

If we could reframe these issues as further benefits of the EU, then we could potentially change the debate in a way that could save the European project.

Reframing these issues as benefits is not an impossible task. Take the hot topic of the day: the free flow of people. Not only is migration from poorer to richer European countries good for the poorer countries, by raising wages and cutting unemployment within them, but it also is good for the receiving countries as well. Immigrants are generally young and diligent workers who fill important gaps in the economy.

A report by the British government found that immigrants contribute to 15% of the country’s GDP growth, and make a net contribution of £2.5 billion to the Westminster’s finances. And yet, the desire to stem the flow of immigration was a key factor for people voting to leave the EU.

If the Remain campaign had done a better job of making the point that immigration is good for the UK economy, rather than merely arguing that other benefits are worth letting migration happen, perhaps there might have been a very different debate, and a different result.

Another issue often decried by the Leave side was overly burdensome regulations handed down by the EU to small UK businesses. Boris Johnson, a leader of the campaign and now the UK’s foreign minister, continually trivialised EU standards and regulations, painting them as unnecessary and costly.

But EU regulations are not designed purely to make life hard for businesses without any basis in fact or reason. Many of the agricultural regulations that Johnson made light of were created to protect consumers from disease. The idea of having common product standards for goods and electronics is not to arbitrarily create more red-tape, it’s to reduce it.

Businesses can cut costs by only having to deal with one set of standards in the Single Market, as opposed to 28 sets of varying standards and regulations.

These are the types of arguments that pro-EU activists need to highlight. People are largely aware of some of the established benefits of EU membership.

They know they can easily go on holidays in Spain or Italy. They know that the Single Market makes it cheaper for them to import French wine or Irish beef.

2 responses to “The EU debate: So much more than a cost-benefit analysis”