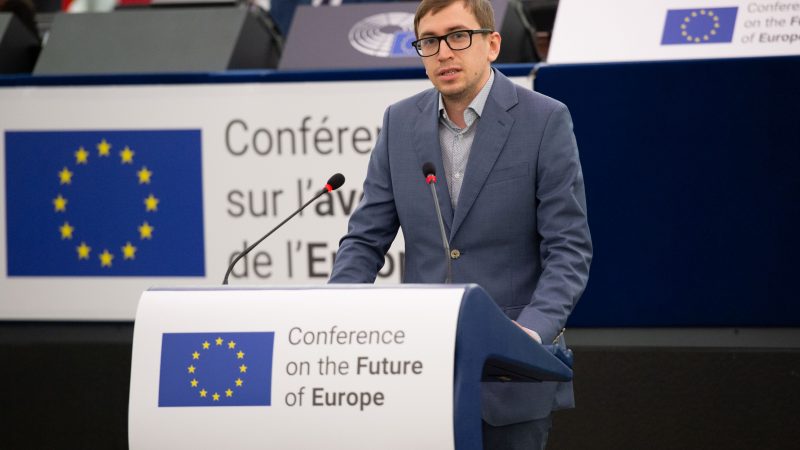 The Conference on the Future of Europe is a brilliant idea to give citizens voice in European decision making. However, the politicians involved just do not know how to engage with them, writes Kaspar Schultz. Brigitte HASE. Copyright© European Union 2021 - Source : EP

The Conference on the Future of Europe is a brilliant idea to give citizens voice in European decision making. However, the politicians involved just do not know how to engage with them, writes Kaspar Schultz.

Kaspar Schultz is the citizen representative of Estonia to the Conference on the Future of Europe.

The second plenary session of the Conference on the Future of Europe was held last Saturday. If there is a takeaway from the plenary, it is that citizens’ dissatisfaction with their lack of voice in the conference took the central stage, even if it was not supposed to.

There is truth to the claim, of course. Responsible for organizing the conference, experienced European politicians chose the working style where they vastly outclass citizens – speeches. The added bonus of this style of discussion is that no engagement has to take place with other speakers.

While speakers did mention other speakers before them from time to time, it was an exception rather than the rule. Only when the plenary was about to end did one politician decide to ask a citizen a question. The fact this was highlighted by one of the conference chairs, Guy Verhofstadt, shows how little such interactions took place.

The organizers also chose to organize the plenary in a way that allowed them to have a longer lunch break, while citizens and citizen representatives stayed in the room, writing notes to themselves. That point was well highlighted by several citizen’s representatives.

Finally, a unique opportunity to have citizens and politicians informally discuss the conference together was missed by organizing a small dinner only for the citizens. The impression was that the politicians used every chance to avoid having a discussion with the citizens who had come to Strasbourg specifically for this purpose.

At university, one of my lecturers used a clever way of keeping people listening throughout their lectures. We would have to write down one thing that we already knew, one thing that we learned and one question before we could exit the class.

Unfortunately, I was left with the feeling that most of the politicians present would not have passed this little exercise.

After the first plenary in June, I thought that the conference was essentially a farce and citizens were not really going to be involved. While there is plenty of reason to still think that, I do not believe it myself anymore. It is hard to deny the genuine desire of at least some politicians to engage citizens.

They just do not know how to do it. They have never had to ask citizens for guidance, only for their votes.

Despite my criticisms, I still believe this conference could be a truly transformative event in European politics. If the EU is willing to reassess how the conference is managed, particularly regarding the difficult-to-use digital platform, it has the potential to usher in a new era in European democracy, likely making the EU more democratic than its member states.

However, there’s another problem related to the conference, which is even more difficult to fix. If the citizens might not know about the conference, the member states don’t care about it. Whether they fear the EU getting new powers or they just don’t know enough to get involved, the apathy among national representatives at the plenary was striking.

While the other speakers, including the citizens, were certainly not without shortcomings, when it came to talking about topics unrelated to the agenda items at hand, representatives of member states excelled themselves.

The problems related to the Lithuanian-Belarusian border are indeed serious, but I fail to see why it should be discussed in a debate about the digital platform.

It seemed as if the plenary served merely as nice background for whatever point national representatives wanted to make. It serves as an example of the attitude towards the conference and its goals.

National governments are also at least partly responsible for the low participation in the platform. During my speech at the plenary, I highlighted the example of Estonia where just three ideas had been shared and six comments written. Yet there are certainly more people who work on promoting the conference in Estonia, who are, after all, citizens too.

If the EU cannot convince the citizens who are promoting the conference to share their own ideas, how can we expect anyone else to do it? If the problem is in the lack of reward for participation, then it needs to be created.

Otherwise, it will be difficult to achieve results that could legitimately be used to decide Europe’s future.

I believe the Conference on the Future of Europe is a good initiative. People from all walks of life have a surprising amount in common when it comes to the problems plaguing Europe today.

But it cannot succeed if all stakeholders are not on board and involved.