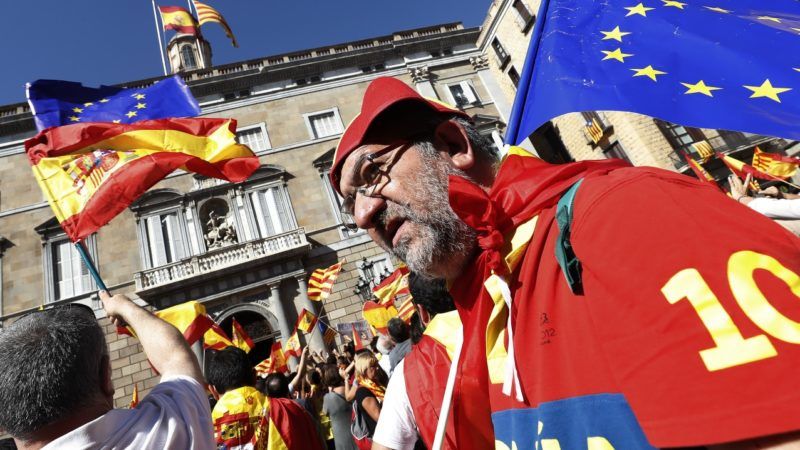 A protestor waves with a Spanish hat and a European flag takes part in a rally in favour of the unity of Spain in Barcelona, Spain, 08 October 2017. [Felipe Trueba/EPA]

Simon Toubeau is assistant professor in politics and international relations at the University of Nottingham.

With the instant, world-wide circulation of images of brutal police repression of peaceful voters, the Catalan government’s cause seems to have won favour in the court of European and global public opinion. But it is in fact isolated.

The governing Spanish Popular Party (PP) has maintained its hard line, refusing to recognise the exercise or its result. This strategy has been bolstered by King Felipe VI’s intervention which, rather than appeal for national unity, offered a one-side condemnation of the conflict. It is also supported by most other Spanish parties, as well as the editorial line adopted by the main Spanish dailies such as El Pais and El Mundo. Potential allies in other historic regions such as the Basque country have remained remarkably silent.

Outside of Spain, European leaders have either taken a neutral stance, relegating the conflict to an internal matter for Spain, or have offered support to the rule of law.

The Catalan government’s current strategy is however fraught with risk. First, it does not acknowledge the real divisions that exist within Catalonia about the desirability of independence.

Second, it will force the Spanish state to maintain its course. The courts have already promised to suspend the parliamentary session in which the Catalan government could declare independence. The central government could go further, using the power conferred by Art.155 of the constitution, to ‘take all measures necessary…to protect the general interest’.

This could mean police intervention, the collective arrests of members of the Catalan government, the suspension of the Catalan parliament and government, followed by fresh elections or the imposition of direct rule. If such action were opposed by mass peaceful demonstrations, it could lead to more street-level clashes.

But the central government’ strategy is equally risky. It does nothing to address the growing sources of grievances in Catalonia. Moreover, it is not clear that it could work: the 10,000 policemen deployed across Catalonia last Sunday could not prevent over 2 million voters from casting their ballot in favour of independence.

The duty of the EU

Either scenarios – unilateral declaration of independence or central government repression – would have serious economic and political ramifications for the EU.

Already, two main Spanish banks – Sabadell and CaixaBank – have chosen to move their seat. With capital flying out of its largest economic region, the Spanish stock exchange has taken a tumble, one that is being closely followed by the falling value of the euro. The messy economics of a divorce – especially the thorny question surrounding the repayment of sovereign debt amassed by the Spanish and Catalan government – could lead to a sudden change in credit ratings, widening spreads on Spanish bonds and could signal a return to the volatility that the eurozone experienced in 2011-12.

For these reasons the EU has the duty to facilitate a dialogue between the Catalan and Spanish government and to bring them back from the brink.

The EU’s reluctance to engage stems from the fact that these are uncharted waters. The violent territorial conflicts that have beset countries within and outside its borders, such as in Northern Ireland, Cyprus and Bosnia-Herzegovina were mediated by national governments, the United Nations and third parties like the United States. The EU has few procedures and instruments for bringing parties to a territorial conflict to the negotiation table. Creativity is therefore required.

What the EU should do

The first necessary action is a resolution passed by the European Parliament and the general affairs council of the Council of Ministers that condemns the situation and recalls the cardinal values of the rule of law, democracy and minority rights in the European constitutional order. This resolution should receive a full endorsement by Donald Tusk, Jean-Claude Juncker, well as the heads of governments of the leading member-states, including Angela Merkel and Emmanuel Macron.

The EU should offer to act as an impartial mediator in the dialogue. Given the heightened tensions and mutual recriminations, this dialogue cannot be left unmediated. The Catalan government will not accept that the Spanish government take on the role of both an interlocutor and an arbiter.

As a mediator, the EU needs to offer a way out of the conflict. The basic condition for dialogue is a formal renunciation of the unilateral declaration of independence by the Catalan government, in exchange for the right to hold a new legally-sanctioned referendum on independence. In case of a No, the Catalan government should then open negotiation for a revision of the Catalan Statute of Autonomy, that offers symbolic recognition of Catalonia’s nationhood and a better fiscal pact.

This offer of mediation needs to be accompanied by the promise that the independence of Catalonia will not be recognised if the referendum is carried out illegally and that the Spanish government will be suspended from the Council of Ministers if it is found to violate civil rights in its suspension of Catalan institutions.

Europe is not short of diplomatic talent that could be called upon to help foster dialogue: Mary Robinson, Carld Bildt and Paddy Ashdown are well-seasoned politicians that could play a constructive role in diffusing the crisis.

The failure to act

Inaction would have devastating repercussions for Catalonia, Spain and the EU.

To force a reluctant central government to the negotiation table, Catalan people could deploy their most successful strategy so far: mass protests, general strikes, and wide-spread civil disobedience that would bring the regional and national economy to a standstill and generate further political turmoil.

Or, realising that negotiation was not forthcoming, the Catalan government could choose to declare independence unilaterally, with all the damaging consequences that this could reap.

Both scenarios would result from the EU’s failure to act.