By Dacian Cioloș and Guy Verhofstadt 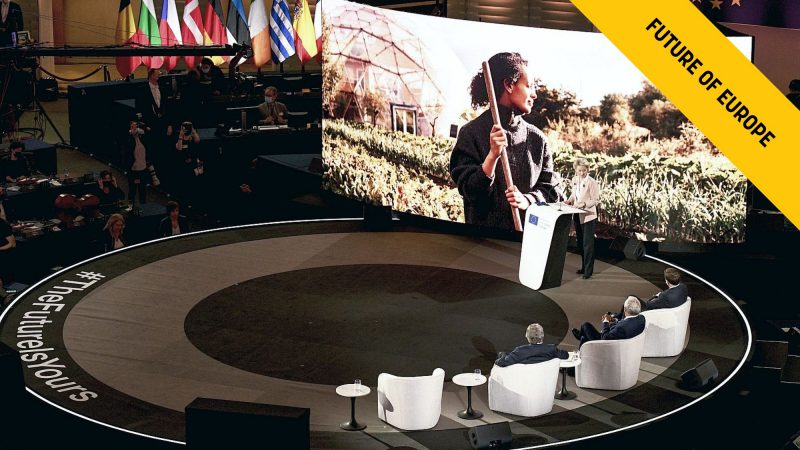 Inaugural event of the Conference on the Future of Europe. [European Parliament]

To regain people’s trust in democracy, we need to fundamentally revisit the way our democracies work. The Conference on the Future of Europe is a chance to update the way Brussels does politics, write Guy Verhofstadt and Dacian Cioloș.

Guy Verhofstadt is an MEP for Renew Europe and the co-chair of the Conference’s Executive Board. MEP Dacian Cioloș is Renew Europe president.

We had got used to the idea that liberal democracy is under threat, but the acknowledgement that European countries too would join the retreat remains hard to swallow. All eyes are on authoritarian leaders actively undermining liberal-democratic values and institutions in several EU countries – and rightly so.

But the broader sense of anxiety they feed on is even more disconcerting, as it is present in all democracies today. Older generations are fearful that democratic government, in an open world, fails to protect their values. Millennials are dissatisfied with the performance of some liberal democracies, which they see as slow, archaic and ineffective in defending their interests.

And yet, the red line throughout this discontent is a belief in liberal-democratic freedoms and values as such, albeit a belief disappointed by the reality of democratic underperformance.

To regain people’s trust in democracy, we need to fundamentally revisit the way our democracies work, so they are for and with the people and cannot be instrumentalised to endorse the power of some politicians

EU in the mirror

In Europe, that means holding a mirror to EU politics.

The European Union has always been the interface between national politics and the wider world. We tackle global problems through Europe, and when citizens feel uneasy about global issues, that is reflected on their attitude towards Europe. In today’s world, there is a lot to feel uneasy about.

EU politicians often shun the confrontation. They hope more effective policies will restore confidence eventually and automatically. They want to avoid an open debate about the EU and how it functions.

They are afraid a more directly democratic approach to EU politics would undermine rather than strengthen the EU. Understandable as that is, it is politically self-defeating and puts at risk the credibility of democracy as such. That’s not how the world works these days.

With the Conference on the Future of Europe, we want to openly take stock of Europe’s achievements and shortcomings by giving citizens a direct say. On top of that, we experiment with deliberative forms of democracy in parallel with – not instead of – representative democracy.

And we want to find ways to update the policies and politics of Europe, more in line with how Europeans see the 21st-century world and their role in it.

Because when democracy is under threat, the answer always lies in more democracy – not less.

Many sides of democracy

But democracy means many things, and we need to move forward on different aspects of it.

One is effectiveness: Criticisms of Europe’s underperformance in some sectors are perfectly valid. We have not shown the necessary power, experience and solidarity to tackle a health crisis like the one we’re now going through.

We need to draw the lessons from Europe’s misfire at the start of the COVID-pandemic to do better in the future. We need a conversation on a real European health union. Europe cannot be satisfied with relying on the crises it suffers to make progress. We must be able to project ourselves into the future without the pressure of urgency.

We see a similar problem with Europe role in the world: we are a pawn in other powers’ geopolitical games, China and Russia first of all, and are being pushed around by global players like Facebook and Apple.

Our failure to act as one is the result of an institutionalised weakness. The unanimity rule makes it impossible for the EU to defend its interests, and constantly undermines our credibility.

But that process has stalled, and often even retrenched. We need the EU to be better and bolder in defending rights, freedoms and the rule of law, because the current political set-up and vision are clearly insufficient.

Some try to give credence to the idea that representative democracy and political liberalism do not necessarily go hand in hand. Nothing could be further from the truth.

A democracy worthy of the name implies not only respect for the popular vote, but also respect for fundamental rights and freedoms, starting with freedom of expression. The citizens who will be asked to express their views at the Conference on the Future of Europe will probably remind us of this.

Yet in a democracy, effectiveness and outcomes only go so far. A third aspect, the ‘readability’ or understanding of EU politics, is increasingly problematic. People agree the EU level should play a large role, but they cannot see who holds power in Europe or how they can control it.

Unfortunately, we have to recognise that we will not be the geopolitical player we want to be as long as Europe speaks with several, sometimes dissonant, voices on the international scene. Our partners know how to play on our weaknesses, so let us make sure that we do not become mere observers of the world.

It is connected to the fourth element of democratic politics: the impact of elections.

The turnout in EU elections is directly related to the importance people attach to the EU, hence was very high last time, in 2019. Yet people also want the outcome of those elections to be more decisive in who calls the shots in Brussels and how they use their weight. We need more duality between Parliament and ‘government’ in Europe.

And whatever happened to transnational lists and Spitzenkandidaten in the past, we cannot keep giving people the impression their vote counts while keeping real power out of their hands when it’s decided who really runs the EU.

The European Union will never be similar to national politics. If the French, say, attach more importance to giving politics a face, Romanians to effective power or the Dutch to parliamentary politics, democracy in Europe will always reflect all of these strands and traditions.

Therein lies an opportunity: through the debate on EU renewal, we have a chance to update the way we do politics both in Brussels and at the national level.

If we draw lessons from the strengths and shortcomings of democratic politics in today’s world, we can find ways to reconnect people to the public interest and reshape the European Union they need for the future.

One response to “Time to rethink EU democracy”