20 Visions for Europe: ‘A Europe that supports research and education to dismantle borders’ 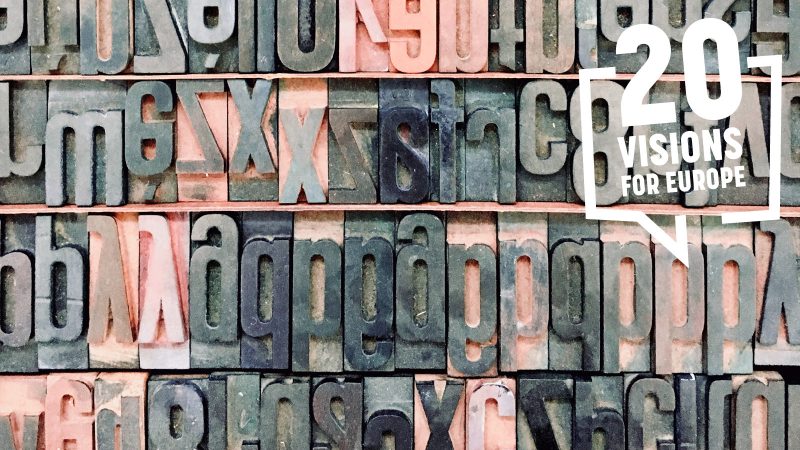 Ramona Coman is a professor of political science at the Université libre de Bruxelles and the director of the Institute for European Studies.

Language is key to facilitate interaction, a way to break down barriers and to deconstruct stereotypes. Being Romanian, having studied in French at school and later at the university, having learned English for professional reasons, a bit of Italian for pleasure and Dutch om mijn hart te volgen, I see “my future EU” as a place where the people of Europe can talk to each other and interact to shape their future together.

Language is more than a communication tool. It is a reservoir of symbols. As the Rectors of VUB, Carolina Pauwels, and Yvon Englert, stated when they announced the ambition of creating a multilingual school in Brussels, “all languages are important”.

While this year we celebrate the dismantling of the Berlin Wall, other walls – sometimes invisible ones – still separate people. Actually, there are more walls around the world than in 1945 or 1989. We see them in different places, including research and education.

Education and research shouldn’t be reserved for only a few. Today the lack of investment in these fields is a reality in the EU and a challenge for many schools and universities. My future Europe is a place where both research and education are no longer empty words, but top priorities for each government.

Educational institutions including universities (the places that I know best) should have the means to fulfil their roles and promote their values, in particular in times of alarming signs that democracy, civil liberties and academic freedom are under considerable strain.

At the Université libre de Bruxelles, we hold freedom and freedom of thought as our insignia, and we defend it vigorously, in solidarity with colleagues whose activities are under threat.

As a mother, my future Europe is a place where young generations benefit from schools and universities that are equipped to tackle present and future challenges.

As a researcher and professor at the Institute for European Studies of the Université libre de Bruxelles, I see students coming from different parts of Europe (and of the world).

Being geographically located at the heart of the EU decision-making process, what I see is the bright side of the current higher education picture, which still reflects the inequalities embedded in the political and economic conditions of each member state.

While young generations benefit in theory from travelling across Europe, from studying abroad and learning languages, this still remains a privilege for a minority. For some, mobility across the EU is a choice, a dream that becomes reality.

Young generations leave their countries to discover new cultures and learn new languages, to acquire knowledge and obtain a degree that later will – hopefully – open the way to jobs in line with their aspirations.

For others, mobility is a way to escape systems of higher education back home which dramatically lack both material and human resources. Mobility has many faces. Highly valued in general, it can be a “parcours de combatant” for others, as economic and social factors still constitute major obstacles.

Mobility should be supported so that each and every person can enjoy it.

I like to say that academia is a place of motivated people. Colleagues in different places teach or conduct research with passion, moved by the desire to understand and explain – each one in their fields – the complexity of our world.

However, this profession has changed over the last decades.

Academics are researchers and teachers, they intervene in the public debate to shed light on different topics that make headlines, they run projects and apply for grants to offer research opportunities to students, they serve as administrators, as managers, as communicators, as intellectuals seeking to contribute to public debates.

An academic today has many hats that she/he switches – not always without difficulty – every day.

Teaching and doing research is not about living in an “ivory tower”.

Universities like mine are engaged actors; they promote values and causes, such as solidarity, academic freedom, civil rights, human dignity, freedom of speech in a context in which inequalities are alarmingly progressing and some of our colleagues in Europe and elsewhere do not longer enjoy academic freedom.

Supporting research and education is a way to dismantle borders and keep away the demons of the past. To help us build the future Europe, I wish that we all can play the many roles that we have chosen in an environment in which education and research are key priorities for all.

2 responses to “20 Visions for Europe: ‘A Europe that supports research and education to dismantle borders’”