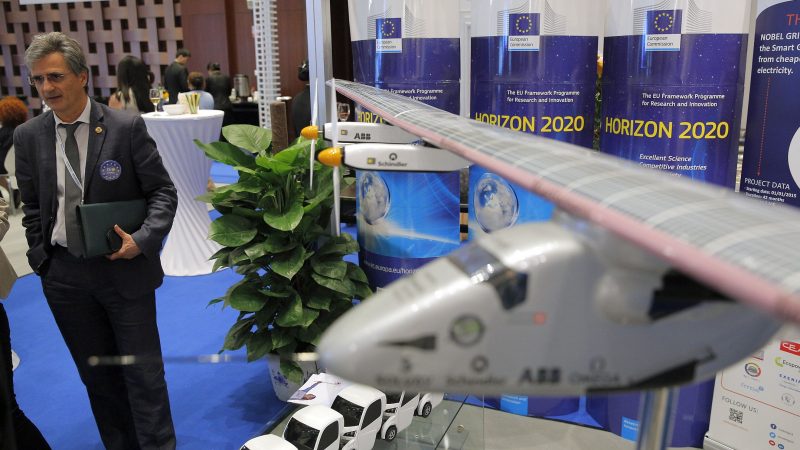 A visitor stands beside model of the Solar Impulse plane at EU booth showing the achievements of EU cooperation funded by Horizon 2020 at Clean Energy Technology Exhibition in Beijing on 8 June 2017. [EPA/WU HONG]

Green MEP Gina Dowding explains why European Greens are encouraged by the parliamentary hearing of Commissioner-designate Mariya Gabriel and why Europe needs an ambitious commitment to research and innovation.

Gina Dowding is a Green MEP for North West England and the Greens/EFA Shadow Rapporteur for Horizon Europe.

Some of her answers were encouraging, while others left more to be desired. What is clear is that we need an ambitious EU agenda for research in the coming years in order to deal with the challenges that we are facing. We count on Gabriel to deliver just that.

That is why we Greens welcomed Ms Gabriel’s commitment to the 35% climate spending target under the EU’s next research programme Horizon Europe. This is the minimum that must be spent if we are to have any chance of actually solving the climate crisis.

We Greens also welcomed Ms Gabriel’s promise to vigorously defend an ambitious budget for Horizon Europe. We were encouraged by the commissioner nominee’s description of herself as a “tenacious and emphatic ally in budget negotiations” during her hearing, and by her commitment to secure an increase to the programme’s budget from 100 to 120 billion, as proposed by the European Parliament.

In order for Europe to remain a global leader, doubling down on research is completely necessary. We also have to deepen our collaboration with the rest of the world. Only openness and inclusiveness will lead the way to success.

Ms Gabriel committed to fostering international cooperation in education, research and innovation referring to it as “an important element in strengthening the role of the European Union as a global actor”. I can only agree.

While demagogues around the world are raising their voices for closing borders and isolationism, Europe must tread another path. Our only hope to deal with global challenges is through global cooperation.

If we are to achieve the Sustainable Development Goals (SDG) and meet the EU’s commitments under Agenda 2030, we have to act together with others.

This should include collaboration with our “twin continent” Africa, as former Commission President Juncker called our southern neighbour. Moving away from a donor approach towards a partnership based on recognition of Africa’s research excellence and potential for innovation.

A current example of such a collaboration is the European and Developing Countries Clinical Trials Partnership, which spearheaded EU and African efforts on health. Its successor, the proposed EU-Africa Global Health Partnership, should continue these important efforts.

Poverty-related diseases such as HIV & AIDS, tuberculosis and malaria have been neglected for too long. They affect over a billion people around the world, yet have not seen sufficient development of new and improved tools for the prevention, diagnosing and curing of these diseases.

EU countries have pledged to end these epidemics by 2030 as part of the SDGs. We are currently nowhere near achieving that. The EU has to commit to increased investment and better international cooperation in global health research and innovation. It is the only way forward. Not least as the private sector has limited incentives to invest in developing treatments against poverty-related diseases.

Future work programmes should contribute to addressing existing gaps in research, funding and product pipelines, such as the above. In this regard, it is essential for the European Parliament to be heavily involved in shaping these implementing tools.

Publicly elected officials should have a say in how the EU’s research funding is spent. We look forward to working closely with Ms Gabriel in this regard, an intention she shares as indicated during last Monday’s hearing.

We are in dire need of an ambitious EU agenda for research to deal with the challenges that we are facing. Projects that deliver real societal benefits – especially in neglected areas of research – must be prioritised over commercial interests.

Industrial competitiveness and sustainable development can go hand in hand, but it must be clear that Horizon Europe and EU research policy should be aimed at tackling societal challenges. From developing green technologies and promoting sustainable food and farming to providing quality and affordable healthcare for all.

We Greens look forward to working with Gabriel in delivering this and count on her to do her part in pushing for an ambitious EU research agenda.