By Ján Ridzoň and František Novotný and Peter Palus

People walk near a billboard showing the picture of nominated President of the European Commission, Ursula von der Leyen, on a wall of the European Parliament in Brussels, Belgium, 25 September 2019. [Olivier Hoslet/EPA/EFE]

The European Union is forgetting the revenue side of the EU budget to pursue its policies. New own resources can provide a link to an EU policy, increase ownership, and shape behaviour of citizens, businesses and governments, write a group of Slovak diplomats.

The European Union has evolved to a polity currently pursuing almost 300 policies in dozens of areas. To accomplish this, it utilises a plethora of instruments on the expenditure side of the EU budget.

Nevertheless, the revenue side, apart from being a source of financing, could be used to contribute to some of these policies as well. Over the past decade, the GNI based resource reached around 72% of the revenue side, which seems like a missed opportunity for the EU. 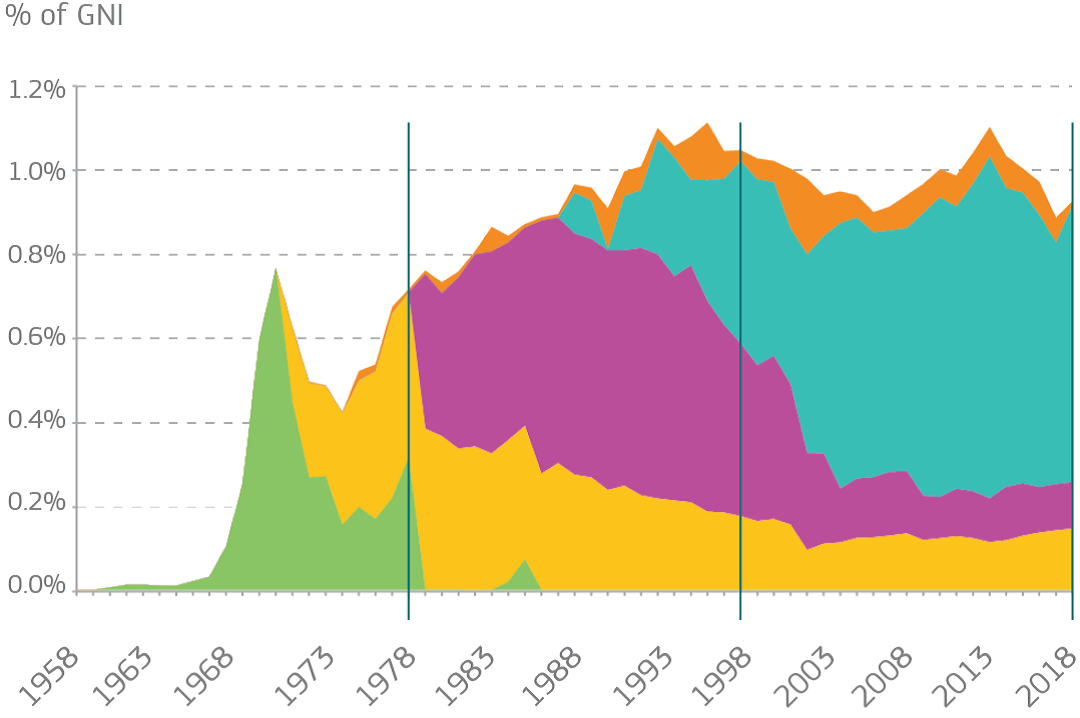 In this column, we would like to focus on two aspects. Firstly, we will explain why it makes sense to adopt new own resources. Secondly, we will briefly outline the factors influencing discussions on new own resources within the EU. Since environmental issues have recently been gaining traction, in our examples we are going to focus on the environment and the fight against climate change, even though the reasoning could be applied to other areas as well (e.g. single market).

The Case for New Own Resources

Since the GNI based resource or traditional own resources do not provide a link to a policy, the new own resources can go one step further and shape or form the behaviour of citizens, businesses or public administrations in a given policy area. In other words, they can “nudge”.

Apart from the efficient collection of revenue, one of the objectives a policy maker should have in mind when devising taxation policy is its effect on citizens and businesses – regulating consumption and production, producing incentives or stimulating investment.

Secondly, a link to an EU policy can increase ownership among EU citizens and businesses. They could identify with it more easily, therefore it would be easier to explain to them why they should pay such a contribution. For example, people are willing to pay more for an electric or hybrid car just to reduce the carbon footprint.

Thirdly, some new own resources have the potential to produce something similar to a California effect. The EU already strives to be a driver of change on a global level in areas such as data protection regulation. An elucidating example in the revenue field is a border carbon adjustment, recently outlined as a Border Carbon Tax by the president-elect of the European Commission in her political guidelines. By adjusting for carbon on the EU borders, importers may shift to more environmentally friendly methods of production to lower the costs of entrance to the EU market.

Lastly, by creating an EU-wide resource, there is potential to eliminate free-riding within a given area. If all member states except for one decided to implement an aviation tax, the free-riding country would not only be in a highly advantageous position, but would also benefit from air traffic relocation. A report from the European Commission found that a reasonable aviation tax on the EU level would have close to zero impact on GDP and overall employment in the EU, and it would also lower the environmental impact due to a reduced number of passengers and flights.

Feasibility – How to make New Own Resources come true?

It is almost certain that new own resources will continue to be a minor, if not symbolic, part of the EU budget in the near future. Below, we are stating three factors that in our opinion influence their eventual adoption.

Some member states are hesitant, because they are concerned with net balances or the so-called “juste retour” logic. They might pay more through a new own resource in comparison to the GNI based resource. One of the ways to overcome this concern would be to create a compensation mechanism for member states whose contributions significantly exceed the EU average. However, even a “fair” GNI based contribution is not a straightforward affair. Some member states with GNI below EU28 average, pay a higher share in relation to their GNI, than do other member states.

Secondly, some member states resist new own resources in principle. They are simply frightened about losing sovereignty in the area of taxation. They consider it a “salami slice strategy” – that agreeing to a new “symbolic” resource would open the door for potential significant changes within this area in the future. These fears might be unfounded, since the decision on a new resource would require unanimity in the future as well. Introduction of a new own resource is not unlimited, must be renegotiated, and is not a blanc cheque for the future.

Thirdly, expanding free trade deals, such as the EU-Japan economic partnership agreement or the EU-Mercosur trade agreement, can lower the income from traditional own resources. Therefore, other forms of revenue would be of greater necessity in the future, and this gap could thus be filled by new own resources. One might argue that a current unfavourable climate for open trade would not expand free trade, however, we consider that the current global protectionist atmosphere will not endure in the long run.

Time for a New Resource?

Some EU member states are neglecting the potential that new own resources on the revenue side of the EU budget could have on shaping behaviour, providing a link with the EU policy, increasing ownership and being a driver on the global stage.

New own resources should not be taken hostage by issues such as net balances, since they deserve to be discussed on their own merit. In other words, we should detach the discussion of these issues from the debate about the policy itself that is addressed by the new own resource.

We should not forget that new own resources would not lead to an overall increase of the EU budget, since they would substitute the GNI based resource. Without increasing the total volume, we can do more to pursue EU policies through new own resources and maximize each euro spent not only on the expenditure side, but also on the revenue side. We can raise the output more with the same input.