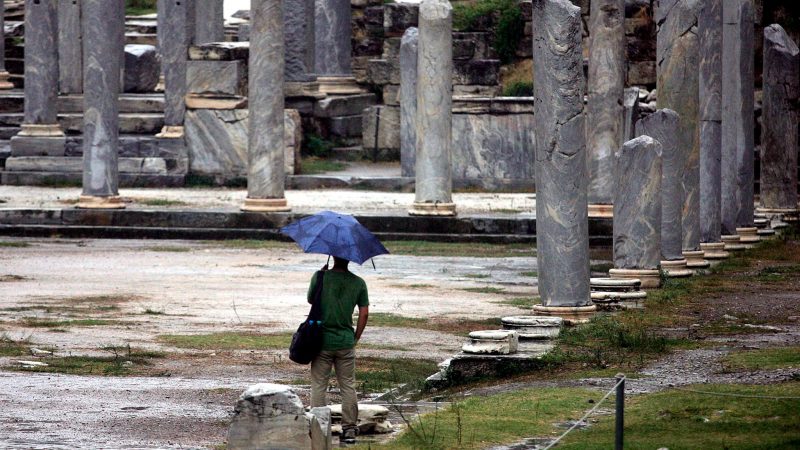 A tourist admires the archaeological site of the ancient Market (Agora) of Athens during an autumn rain , Friday 16 September 2005. [Orestis Panagiotou/EPA/EFE]

European democracy is in urgent need of reinventing itself. Under threat by polarisation and disinformation, deliberative democracy could help bring back power to the people, from the hyperlocal to the international political field, write Pepijn Kennis and Samuel Doveri Vesterbye.

Pepijn Kennis is a regional member of parliament and representative of Brussels’ deliberative movement AGORA (@PepijnKennis). Samuel Doveri Vesterbye is the managing director of the European Neighbourhood Council (@SamuelJsdv).

The European political context is one of institutional distrust and a manipulative media landscape. Ever since the 60s, people have lost trust in democratic institutions. But recently, we’ve been losing trust much faster.

Mostly, it seems, we don’t believe our politicians are representing us: in Greece, for example, only 13% believe that elected officials care about regular citizens. In France, less than 10% of citizens trust their political parties. It seems largely overdue to review our idea that democracy should be representative and that representation is democratic.

The problem of political mistrust isn’t uniquely European. It is found across most of the EU’s neighbourhood, ranging from Eastern Europe and Turkey, to the Middle East, Central Asia and North Africa. It should come as no surprise that 68% of Armenia, Azerbaijan, Belarus, Georgia, Moldova and Ukraine report distrust in political parties, while 62% don’t trust parliaments and 58% distrust their elected government.

The media aren’t helping either. Large scale campaigns of disinformation, a liberalised media landscape competing with clickbait and fake news for the readers’ attention and social media echo chambers (e.g. algorithmic polarisation) together make for an explosive cocktail.

People hear what they want to hear, not necessarily what’s true, and they are surrounded by others who hear the same. Each creates his own reality, drifting further away from a shared narrative.

According to the United Kingdom’s National Security Communications Team, foreign actors continue to pose a serious threat in terms of negative and disinformation influences, particularly through online channels. Liberal democracies allow for media pluralism, which make them particularly vulnerable to disinformation.

One way of mitigating this is a drastic renewal of our democratic models, by increasingly involving and efficiently institutionalising citizens in all their diversity directly in decision making. New and data-driven research show how participation can play a key role in surpassing disinformation and polarisation.

Don’t borrow from the authoritarian cookbook

“Dissatisfaction with and lack of confidence in the functioning of the institutions of democratic government have become widespread,” Samuel P. Huntington wrote in 1973. What Huntington describes in the early 1970s has only gotten worse.

Today, disinformation (“fake news”) and declining public distrust have been turbo-charged by a new structural phenomenon: the internet. Huntington famously proposed hierarchical restructuring to counter the crisis of liberal democracy.

But when democracy is broken, you don’t borrow from the authoritarian cookbook to fix it.

As a democracy, hierarchy and centralised power may look attractive and efficient, but it’s hardly in our comparative advantage to use what authoritarian competitors do best. Following Huntington’s logic, we might as well get rid of many democratic inconveniences, install a strongman, curb judicial independence and do away with parliamentary oversight.

Contrary to the above, democracies are more likely to find long-term and sustainable solutions to disinformation and polarisation by renewing their own model of governance, while pushing for more, not less, democracy.

The OECD recently published a report on innovative citizen participation and new democratic institutions, titled ‘Catching the Deliberative Wave’. The report reviews nearly 300 cases where policymakers involved citizens in some way in policymaking.

It finds that for participatory processes to help restore trust in our democracies, it is crucial to bring together a diverse group of citizens, give them proper information and the time to process it, moderate open and frank discussions, and have governments commit themselves to the results beforehand.

To focus on the information gathering and processing, these procedures are often referred to as ‘Deliberative Democracy’, as opposed to ‘Direct Democracy’, e.g. an uninformed (or misinformed) referendum, or ‘Representative Democracy’ i.e. through elected representatives in parliaments or senates.

In Brussels, the citizens’ movement Agora.Brussels advocates for deliberative democracy to exist permanently. To achieve this, they participated in the elections for regional parliament and obtained one seat.

This allowed them to organise a sortition (random selection) of 89 citizens, reflecting the diversity of the population in terms of age, gender and educational level. Together, these citizens decided to work on the theme of housing, and their regional MP has committed himself to transmit whatever they decide for a vote in parliament.

The movement believes that citizens have at least as much legitimacy to make decisions then elected politicians, and often they are more capable to think in the general interest in the long run.

Many more are turning the deliberative way. Most often cited, the Irish Constitutional Convention allowed randomly selected citizens to overcome political differences and electoral interests and propose thing such as a more liberal abortion policy and gay marriage, which would never have passed in an elected parliament.

In France, President Macron organised the Convention Citoyenne pour le Climat and committed himself beforehand to submitting the results to a presidential decree, a parliamentary vote or a referendum.

Much more recently, Chileans decided in a referendum they want citizens, not congressional representatives, to write a new constitution. Though these are one-off examples, they show the strength of deliberative democracy.

If the European Union wants to promote democracy domestically and globally, it should join this deliberative wave and build a local-to-local foreign policy. It should start by organising its convention on the future of Europe in a deliberative manner, and implement these processes in a structural manner in both its own policy-making and its support to member states and foreign states alike.

Deliberation will give hope to millions: Democracy 2.0

In traditional elections, several counter-measures already exist to counter polarisation. They include internet regulation and media literacy. Yet both are limited and often ineffective because voters get their information online and citizens become disposable for politicians in between election periods.

Continuous deliberation is a complementary necessity in a healthy democracy as it stops algorithmic echo-chambers in decision making while lowering citizens’ mistrust. Furthermore, research overwhelmingly shows that dialogue and deliberation increase consensus while moderating citizens’ political views, largely because they are face-to-face as opposed to online and anonymous.

Using randomly selected citizens’ panels as a new form of democratic governance is therefore attractive because it takes away the option of citizens to point the finger at politicians.

During the decision-making process, deliberative citizen panels would no longer get the majority of their information from the internet, but instead consult experts and evidence-based studies, thereby eliminating disinformation to a large extent.

Allowing a small, yet perfectly diverse and mathematically representative sample of society, to continuously govern our democracies effectively allows us to outcompete authoritarians in terms of efficiency and legitimacy.

It would allow democracy to renew itself based on what it does best: take decisions in the general interest of their citizens, instead of trying to catch up with authoritarian efficiency by downgrading our liberties.

Deliberation will give hope to millions around the world, who also believe that democracy is a universal right. From the right to the left, it can give a renewed sense of purpose: Democracy 2.0.