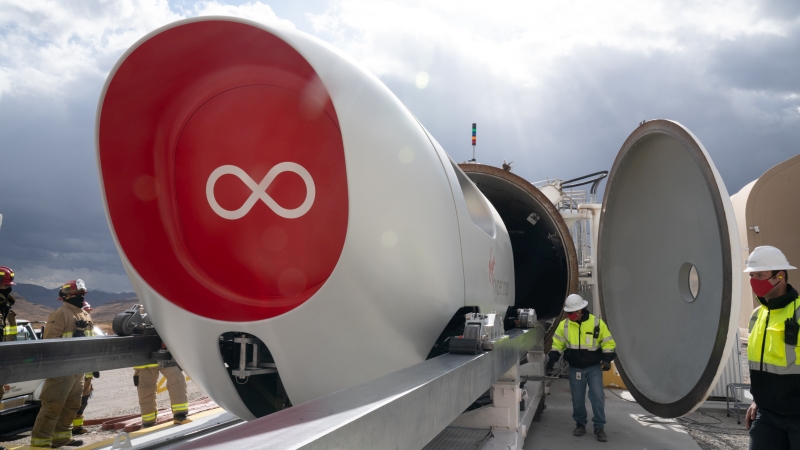 Probably more than a few eyebrows were raised in December 2020 when the Hyperloop was included in the EU’s mobility strategy, tipped in the document as a technology Europeans can expect to see coming “in the near future”.

For years, the technology was dismissed in Brussels as a (literal) pipe dream torn from the pages of science-fiction: levitating pods hurtling goods and passengers through airless tubes at almost double the speed of jetliners, connecting cities like metro stops.

However, with significant investment from the private sector and proponents of the transport system increasingly having the ear of European lawmakers, Hyperloop is moving from a fantastical oddity to a potential new mobility mode.

“We’ve been delighted that the European Commission has really taken a front seat when it comes to understanding the potential of Hyperloop,” said Diana Zhou, senior director of global alliances and policy at Virgin Hyperloop.

The European Commission’s directorate mobility and transport “has been leading workshops with Hyperloop technology companies such as ourselves, as well as standards groups and regulators,” she told EURACTIV, adding: “they’ve been extremely proactive.”

Proposed by inventor and serial entrepreneur Elon Musk, the Hyperloop technology works on the principle that by travelling in a vacuum – without the friction generated by wheels on physical surfaces or air resistance – incredible speeds can be achieved.

In essence, the system is a series of airless tubes through which pods travel, propelled by electromagnetism. Powerful magnets are used to raise the pod from the track, while the pressure inside the tube is lowered to roughly one 1,000th of atmospheric pressure.

Virgin Hyperloop, which began as Hyperloop One before rebranding following investment from billionaire Richard Branson, is just one company staking their claim in the burgeoning Hyperloop market.

“We’re designing the technology to go at speeds of over 1,000 kilometres an hour. And it is completely electric – there are no direct emissions,” said Zhou.

While in the short term Hyperloop will likely be used to move cargo only, passengers are also foreseen, with each pod designed to carry around 28 people.

In November 2020, two Virgin staff members became the first passengers to complete a Hyperloop journey. Travelling on a test track built in the desert surrounding Las Vegas, the pod travelled 500 metres in 15 seconds, hitting a speed of 172 kilometres per hour.

“We designed a prototype pod for two people, which really was meant to demonstrate that we could do this safely. It took about a year and a half to develop the safety processes,” said Zhou.

“Now we need to go and demonstrate that it makes sense from a business perspective and run it operationally in the real world,” she added.

The company is hoping that cargo transport will be up and running within the next five years, with passenger transport following soon after.

In India, it is foreseen that Hyperloop will be used to link two cities – central Pune and the Navi Mumbai airport, a journey of around 130 kilometres.

Critics in Europe, however, balk at the notion that a continent with a dense train network and extensive air connections needs a transport mode that requires expensive new infrastructure.

A series of tubes must be constructed across the landscape for Hyperloop to operate. Zhou, however, believes that the long-term cost of Hyerloop will be lower than that of rail or road.

“The reason why many [transport companies] require public subsidies is because there is a very large maintenance cost. You’re talking about technologies that were built 50 or even 100 years ago, and we’re still trying to utilise them to accommodate today’s demands, which is a very, very difficult thing to do,” she said.

“We have a unique opportunity to actually build something from the ground up using the advancements in technologies that are available to us today. We can design the system to have very, very low maintenance costs,” Zhou added.

When asked about the need for Hyperloop in a continent replete with train tracks, Zhou said the technology should be considered as a complementary means of sustainable travel.

“We need to have all the tools on the table in order to understand how we can meet sustainability objectives and become carbon neutral by 2050. That’s a really, really difficult task. And I think Hyperloop is one of those tools,” she said.

The European transport landscape has been upended by the ongoing pandemic, with modes that involve seating strangers together considered a health risk. The increasing trend of working from home has led to speculation about whether travel rates will fall permanently.

It seems an inopportune time to launch a form of mass transit. Zhou, however, believes Hyperloop will weather these challenges better than other types of public transport.

“The way our pod is designed, it’s inherently very flexible. It is a smaller, more nimble system… People will feel a lot safer with fewer people and that kind of closed environment, than, say, if you were to board a train that has hundreds of passengers,” she said.

And as for the end of commuting and a slowdown in travel?

“I think there’s definitely a need for face-to-face and social interactions,” Zhou replied. “I don’t think that’s going away anytime soon. As soon as it is safe to do so, our offices will open back up… I think no matter what your business is, you’ll still desire some kind of social interaction.”

Operating globally, the funding behind Hyperloop changes by region. In India, it is possible that the project will be entirely funded by the private sector. In the United States, Hyperloop is regulated under the Railroad Administration, making it eligible for federal funding programs.

In Europe, however, the technology is yet to find a regulatory home.

Zhou wants Hyperloop to be given a similar standing to rail and road infrastructure in the EU – making it eligible for public funding.