This article is part of our special report Unclogging one of the most congested cities in the world.

Jakarta’s traffic jams shave billions off Indonesia’s economic output every year. A new focus on improving public transport and picking up tips from Europe hopes to free up the congested streets of the megacity.

Indonesia’s capital, on the island of Java, is home to 10 million people, while its greater area includes nearly 30 million inhabitants, ranking Jakarta only second globally to Tokyo in terms of most populous urban sprawls.

That large population has led to monster traffic jams, harmful air quality and an estimated $4.5 billion annual hit to the economy. The traffic congestion also contributed to a decision to move the capital to a new site on the island of Borneo.

But efforts to get the traffic flowing again are underway. The city’s first metro line opened earlier in 2019 and order is being brought to the chaos of Jakarta’s fleet of mini-vans and mini-buses.

A lack of political interest in public transport towards the end of the last century and the beginning of this one allowed the city’s arteries to get clogged but the current president, reelected earlier this year for a second term, bucked the trend.

Joko Widodo was governor of Jakarta between 2012 and 2014 and was instrumental in breaking ground on the metro system (MRT), which had been in the pipeline for a decade before it finally saw the light of day.

The president is not done yet either. In August, Widodo signed a decree that lays out his government’s support for electric vehicles, including an incentive system to boost production and purchases.

“The business strategy can be designed in this country so that we can get ahead of others in building an inexpensive electric car industry, which is competitive because the raw materials are here,” the president said in August but warned that building the industry would not happen overnight.

Electric vehicles are firmly on the radar of Jakarta’s public transport operator, Transjakarta, as well. The company aims to fully electrify its fleet by 2030 and is currently trialling three electric buses, two of which are Chinese while the third is home-built.

“We have a plan for electro-mobility. As you know, the market leaders for electric buses at the moment are Chinese buses,” Transjakarta CEO Dr Agung Wicaksono told EURACTIV, during a visit to Brussels for the Busworld Forum.

“My purpose for being here is to see how electric buses are developing in Europe,” Wicaksono explained, adding that “based on reputation and customer preference, our European buses have won their hearts”.

More than 400 of the 900 buses owned by Transjakarta are Mercedes, while Scania and Volvo also are present in the European manufacturer-dominated fleet.

“We want to see if these partners are keeping up with developments and are ready to enter the tropical market of Indonesia. The key for us is not the source of the product but the quality of the product,” he added. 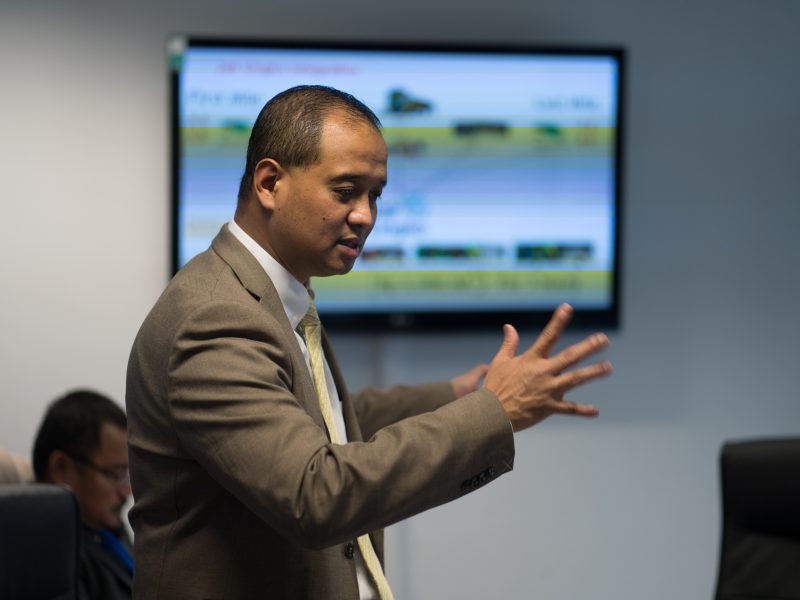 European manufacturers provide the majority of the buses that service Indonesia’s sprawling capital city. As Jakarta pledges to go all-electric by 2030, the city’s transport heads want to stick with their current providers and also learn a thing or two from Europe.

Jakarta’s climate is hot and humid all year round and part of Transjakarta’s strategy to get more people into public transport is to offer services with air conditioning. Wicaksono pointed out that the extra power needed to run those systems will put extra strain on battery life.

“It consumes a lot of energy compared to here in Europe, but electric vehicles are certainly the future,” he added.

Bus manufacturer Daimler-Mercedes told EURACTIV that the German firm is aware of Transjakarta’s electrification plans and is working with the company to address the challenges posed by the target.

In late 2018, Mercedes launched its eCitaro model, an electric version of its popular base Citaro option, which is offered with e-mobility consulting and training.

That could be a key cog in any decision to buy European buses, as Wicaksono highlighted that mechanics will have to be retrained to service electric vehicles. Overall cost is also a top consideration.

Transjakarta’s decongestion push is starting to pay off: Dutch developer TomTom recently ranked the city as the seventh most congested in the world, marking an improvement on the previous year.

“It’s a top ten that, in this case, we want to get out of,” Wicaksono told reporters.

Aside from electrification, other measures like extending the bus network to offer services to more people and digital improvements are also in the pipeline.

Seventy-seven percent of the population currently lives within 500 metres of a bus stop and the goal is to bump that coverage up to 95% by 2025.

Wicaksono acknowledged that developments in Latin American cities are more relevant in terms of sheer size but that Europe is a role model when it comes to services like integrated payment cards and automated ticketing machines.

It may be too late to keep Indonesia’s capital in Jakarta, given the political and climate factors at play, but the drive to get traffic under control and clean up the airways as a result is still very much alive.