Under the new regime, which will begin in 2020, EU member states will no longer have to meet a certain percentage of their renewable energy obligations through the use of food-based biofuel. Campaigners have been urging a change to the law for many years, saying it is displacing food crops and causing environmental damage by creating an artificial market for biofuel in Europe.

They have also said the land use change from growing the biofuel crops is causing more emissions than the biofuels abate in their use for transport.

The agreement sets a target of 14% renewables in transport by 2030 – part of an overall renewable energy target of 32%. Member states may continue using food-based biofuels to meet their renewable transport targets but their contribution will be limited to no more than the amount of biofuels they were using in 2020 – with a maximum of 7%. The rest will need to be met with electricity or advanced biofuels which are not made from food crops.

Additional restrictions will be put on palm and soybean oil biofuels, which can still be used but cannot be at a level above each country’s 2019 consumption levels. This should cause the use of palm oil to gradually decline from 2023 onwards, until it reaches 0% in 2030. 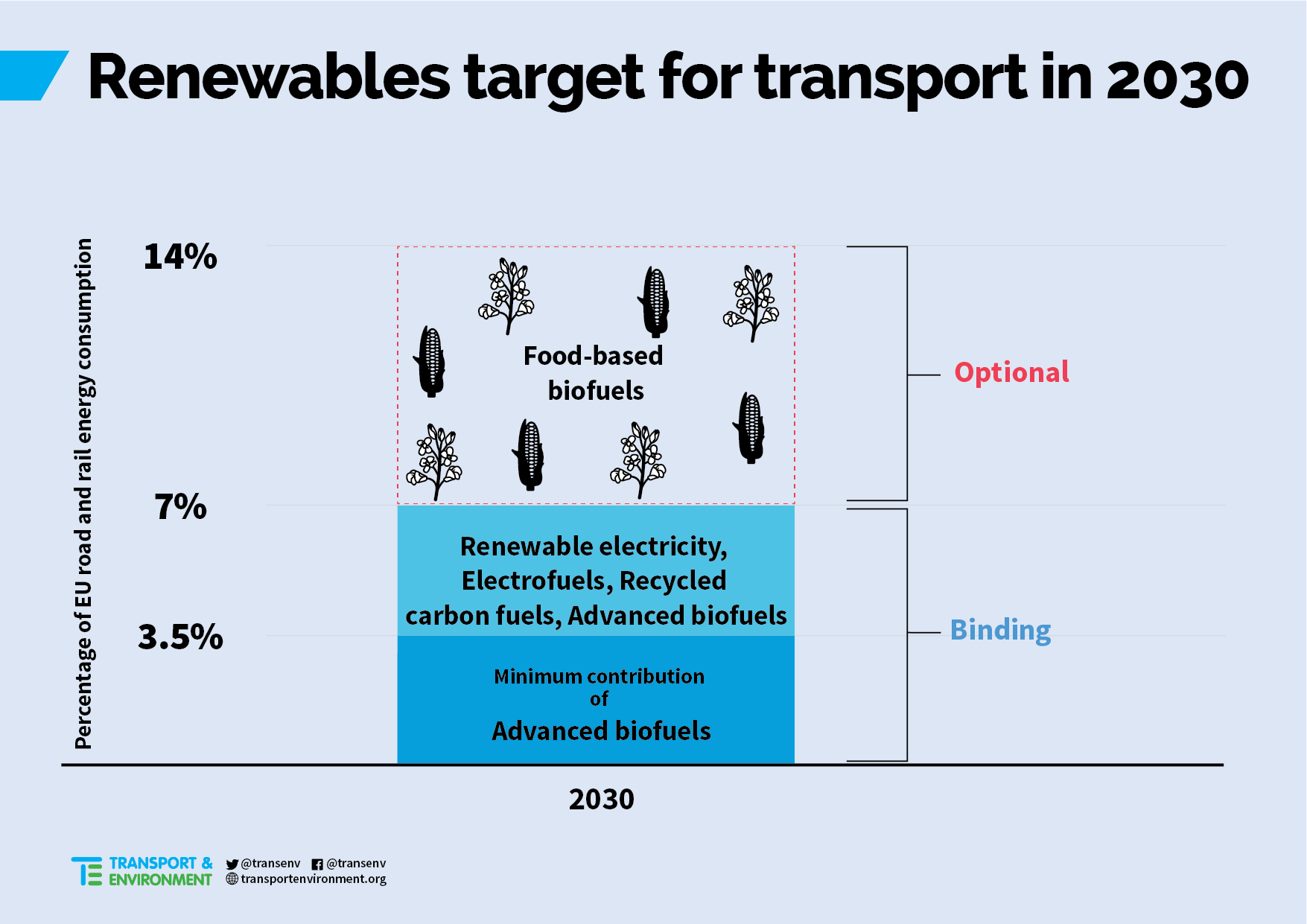 Bas Eickhout, the Dutch Green MEP at the centre of the negotiations on biofuel, said scrapping the perverse incentives will rid Europe of palm oil for fuel.

“We succeeded in ensuring that there is no longer a direct European stimulus driving the use of these type of fuels, taking away the main excuse that governments use to keep on subsidising their farmers at the expense of the climate,” he said.

“There is no precedent for a phase-out of the use of specific crops. The importance of this [palm oil and soy] provision is shown by the reaction of the European Commission, who have expressed their reservations. Apparently, there are some Directorates where trade agreements with Indonesia and Malaysia are more important than the environment.”

Europe’s farmers’ groups have complained that the Commission’s agriculture department has been sidelined in the discussions, and have called on the Commission to object to the new regime.

The compromise does not go as far as environmental campaigners had hoped. They had been calling for a complete ban on palm oil and soy biofuels from 2020.

“EU member states will still be allowed to burn massive amounts of food,” said Marc-Olivier Herman, EU economic justice policy lead at anti-hunger campaign group Oxfam. “Biofuels made from palm oil, rapeseed, and other food crops, are destroying forests, pushing people off their land, and could fuel the next spike in food prices. Biofuels made from food crops are not the answer to climate change, they are part of the problem.”

However, EU lawmakers have said that an outright ban on palm oil may violate World Trade Organisation rules. The Commission still needs to come up with a methodology by 2019 to make the phase out operational.

Laura Buffet, clean fuels manager at the campaign group Transport & Environment (T&E), said that scrapping the targets will accomplish the same goal. “The EU has removed the single biggest driver for food based biofuel expansion in Europe: the infamous transport target,” she said.

“Governments now have no more excuse to force drivers to burn food or palm oil in their tanks after 2020 and should design policies that promote the use of renewable electricity or biofuels based on wastes and residues.”

But she added that the phase-out is still far too slow. “It’s a disgrace that Europeans could be burning palm oil for another 12 years and very sad to see the European Commission playing such an obstructive role in the final negotiations. But the battle is not over: each European government can in 2021 decide to ditch palm oil and other food-based biofuels.”

The advanced biofuel industry said on Thursday they can work with the new regime. “The compromise contains positive elements; there is a mandatory target for renewables in transport and we welcome the first EU binding target for advanced biofuels with a strict trajectory – starting in 2022 and increasing to 2030,” said Tina Sejersgård Fanø, executive vice president for agriculture and bioenergy at Novozymes.

Emmanuel Desplechin, secretary general of European renewable ethanol association ePURE, called the deal “a step in the right direction” because it will “still allow member states to use sustainable biofuels in fighting climate change”

“Of course, this is not a perfect solution,” he said. “Allowing member states to undermine the transport target by lowering the crop cap or relying on artificial multipliers gives the illusion of progress and puts Europe’s commitment to decarbonising transport into question.

Capping crop-based biofuels at 2020 levels also unfairly penalizes sustainable biofuels like European renewable ethanol, which if given the chance could drive EU decarbonisation even further – but it is a major improvement over the initial proposal from the Commission.”