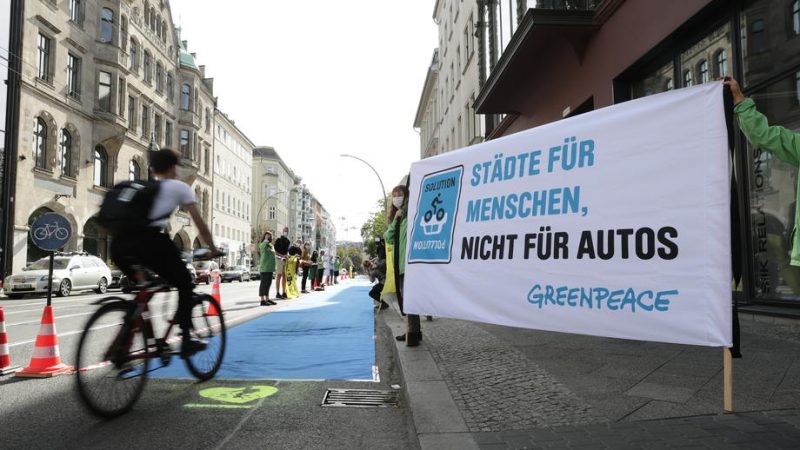 To achieve deep and permanent cuts in air pollution and greenhouse gas emissions, cars must become the exception in cities, not the rule. Bold political action will be needed at local, regional, national and European levels, argues Lorelei Limousin. EPA-EFE/HAYOUNG JEON

To achieve deep and permanent cuts in air pollution and greenhouse gas emissions, cars must become the exception in cities, not the rule. Bold political action will be needed at local, regional, national and European levels, argues Lorelei Limousin.

Lorelei Limousin is a climate and transport campaigner in the Greenpeace European Unit.

When I first came to Brussels eleven years ago, I arrived on a Sunday morning. I was amazed to discover a car-free city. The sun was shining children were joyfully playing in the street and groups of young people were selling second-hand clothes on the sidewalk.

The only vehicles on the roads were trams and buses. At first, I thought every Sunday in Brussels would be like this, but the day after the streets were packed with cars and traffic jams. That’s when I realised that my arrival in Brussels coincided with the annual car-free Sunday.

A decade later, the situation has somehow improved in Brussels, and in other European capitals like Paris, Berlin or Madrid. There are many more cyclists around, pedestrian zones have been created throughout the city, including in the city centre, and many parents swapped their cars for cargo bikes.

However, we have a long road ahead, as the mobility system is still mainly focused on cars and polluting engine vehicles. Needless to say, the mobility situation is much worse outside the main cities and in the countryside, with far less people-friendly and sustainable transport options.

Why is it urgent to transform our cities?

We have become ever more dependent on cars. The total number of cars on European roads reached a staggering 264 million in 2017, 25% up since 2000, and drivers use their cars more often, driving on longer distances.

However, we don’t have fair access to mobility. One-fifth of people lack easy access to public transport in cities, many of us experience the lack of a safe cycling route network, and those that cannot afford to buy a car are often left with poor alternatives.

At the same time that other sectors have cut emissions, cars have greatly contributed to rising emissions from the transport sector. In 2018, transport represented 29% of GHG emissions in Europe, and cars alone are responsible for 12% of Europe’s overall GHG emissions.

Road transport is also one of the main drivers of air pollution, which causes 400 000 premature deaths in Europe every year.

Cities and national governments are both on the frontline when it comes to redesigning urban mobility to reduce private car usage and prioritise walking, cycling, public transport and shared alternatives. But the EU has a key role to play.

What can the EU do?

In 2013, the European Commission issued an Urban Mobility Package with recommendations for member states. But because there was no mandatory action, many EU countries and cities did not follow up, failing to prepare and implement ‘Sustainable Urban Mobility Plans’” that would cut car use.

There are a number of actions that the EU can take to make cities more livable for people, not cars, planning and implementing transport policies in a way that reduce inequalities:

The European Commission should ensure cities and member states operate a shift from cars to cycling, walking and public and shared transport.

As part of the upcoming new EU urban mobility framework due by the end of 2021, the European Commission should require European cities to develop a sustainable urban mobility plan (SUMP), aligned with the 1.5°C goal of the Paris Agreement.

If local authorities do not have such plans, they should not be allowed to access EU mobility funds.

Such plans should include cutting down unnecessary journeys, reducing public space allocation to motorised transport (parking, roads, etc.) and increasing car free zones and green public space, or going as far as banning cars from cities altogether if needed.

Cycling, including with cargo bikes that transport children and goods, must be made easier and safer. Sidewalks and public transport should be accessible to everyone, including low income households and people with physical disabilities or reduced mobility.

2) Stop funding what creates the problem, and increase funds for inclusive mobility

We are in the middle of a climate emergency and we need consistent policies, we cannot afford to have the EC allocate funds to promote cycling while institutions like the European Investment Bank keep pouring billions into highway projects, despite their effect on induced mobility demand and emissions.

3) The EU should say goodbye to fossil fuel cars

The European Commission proposed in July to end sales of new internal combustion engines cars by 2035, but the deadline comes seven years too late to effectively keep global heating to 1,5°C and limit climate breakdown.

Carmakers must be held accountable and this must happen without delay, or our lungs will continue to suffer despite cities’ efforts to implement new cycling lanes.

Replacing every car on the road today with an electric car is also not a sustainable solution. We will need electric cars to cover transport needs that cannot be addressed in other ways, but the EU should stop thinking that a green growth of transport will fit in and match Paris’ goals.

Putting people and nature, not cars, at the centre of urban transport planning will not only transform city living, it will also contribute significantly to climate action.

The European Commission’s consultation on the future urban mobility framework is available online until 23 September – and we should not miss the chance to participate and express our preferences for the cities we want to live in.