The EU and the developed countries need to more forcefully direct their resources and attention to “the belt of crisis” stretching from Somalia to Mali, Humanitarian Aid and Crisis Response Commissioner Kristalina Georgieva told EURACTIV in an exclusive interview.

Bulgarian Kristalina Georgieva was a World Bank vice-president until she ‘saved’ the Barroso II team by becoming EU commissioner for humanitarian aid and crisis response after the first candidate, Rumiana Jeleva, flopped at her hearings in the European Parliament.

Less than a year later, she was awarded the coveted titles of ‘European of the Year’ and ‘Commissioner of the Year’ by the Brussels-based European Voice.

Commissioner, what does this map, where a number of countries in Africa stretching from Somalia to the East to Mali to the West, appear in yellow? What is happening to the world?

What this map is telling us is that there is an increased fragility in the world driven by two main factors. The first is extremism, leading to more armed conflicts, and the second is climate change, very often hitting the same places.

It is a belt of crisis, with a serious risk of spill-over. Take for example countries like Cameroon, a traditionally peaceful and stable middle-income country, which is now hit by instability from the North, from Boko Haram, from Northern Nigeria, and instability from the refugee flows coming from the Central African Republic.

What we also see is that protracted crises like Darfur remain a huge problem without a prospect of solution. Even worse, their neighbourhood is in flames. The situation in South Sudan is especially dramatic.

All this leads to an increasing number of people running for their lives, within their own countries, or across borders. The latest UNHCR report on refugees that has just been published paints a very troubling picture.

Can you explain the dynamic of the threats to the African continent? In a previous interview you explained the importance of preventing major humanitarian catastrophes in the Sahel, the geographic zone of transition between the Sahara desert and the Sudanese savannas. The area you are highlighting today partly coincides with the Sahel.

What the map shows is that we now have instability that goes all the way from the Sahel to the Horn of Africa. And the situation in the Sahel remains very worrisome, because Mali is still not out of the crisis. The north of Mali continues to be violent. There are worrisome expectations from the impact of drought this year, so food insecurity is likely to increase. And that, combined with instability in Nigeria, means that we may be facing, yet again, tens of millions of people being at risk of hunger, at risk for their lives.

But what causes the gravest concern is that we also have emergencies right next to each other – the Central African Republic and South Sudan – with no clear prospect of rapid resolution. And Al-Shebab in Somalia continue to be a problem, for Somalia, but also for Kenya.

In other words, trouble travels across borders. And whether it is arms from Libya into Mali, or Boko Haram into Cameroon, or Al-Shebab into Kenya, we see that these non-state armed groups are increasing in numbers and in spheres of impact. Outside this map, there is a similar situation in Syria and Iraq, namely the mobility of ISIS (Islamic State in Iraq and the Levant) from Syria to Iraq and from Iraq to Syria.

A very important report has come out this year. This is the ICRC annual report, that says armed conflicts are on the increase, after a period when they were on a decrease. And that is happening together with two other factors of instability – the increased role of non-state actors – armed groups that couldn’t care less about international law,  and the increased asserted sovereignty, as ICRC calls it, although I would call it aggressive sovereignty, that is, states that do not take care of their people, but on the contrary harm their people. 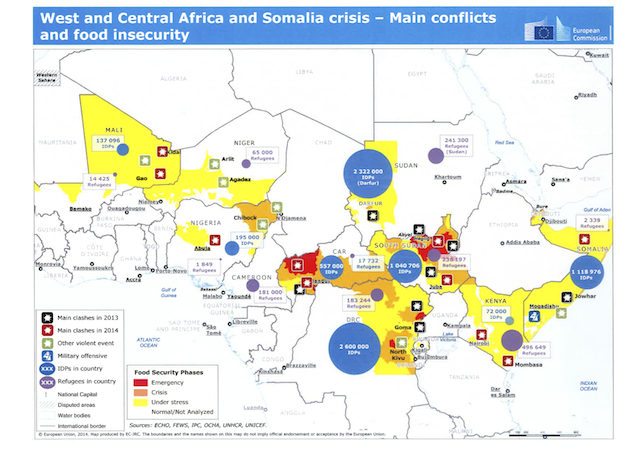 For the humanitarian operations, for those who try to save lives, this means that we are facing two negative trends simultaneously. One – the number of people we are trying to assist is growing rapidly, and two – access to people who need help is decreasing. It is getting more dangerous, and more difficult, to provide help.

We are protected by the Sahara desert in that sense. But I read that more and more desperate people try to cross the desert and die there. Nobody knows how many they are…

It’s true. Increased insecurity pushes people toward desperate measures. It pushes them to travel long distances in very dangerous conditions, to get on broken boats and try to cross the Mediterranean. How can we cope with this? I think it is absolutely essential to understand that we must address the root causes of insecurity.

When we look at those countries, let’s keep in mind that these are places with the fastest population growth on the planet. Countries in vulnerable conditions also produce the largest number of people for whom there are no jobs, no home, no hope. So if we are to address this, we also need to think about how can we provide better security conditions and better conditions for development. That means more forcefully directing resources and attention to the belt of crisis that is clearly in front of us.

Could you elaborate more on the effect of climate change?

The EU is clearly the largest donor, but it’s action is divided between its different arms. You represent the humanitarian arm. Commissioner Piebalgs the development arm. There is a foreign affairs and security arm with High Representative Catherine Ashton in charge; there is a EU neighbourhood policy with Commissioner Füle in charge. From everything you said, I imagine these efforts need to be streamlined…

Not long ago, we adopted what we call the Comprehensive approach to external conflicts and crises.  These components of action are connected. And I can say two things have already happened, in which the EU has taken the lead. One is connecting humanitarian and development action in countries in fragile conditions. We are programming humanitarian funding and development funding in areas of protracted crisis. For example, I called together with [UN Under-Secretary General for Humanitarian Affairs and Emergency relief] Valerie Amos for a fundraising conference on the Central African Republic. Our immediate objective was to mobilise resources for life-saving activities, but at the same meeting we brought together development organisations and got over $500 million pledged, 200 million for immediate humanitarian action and 300 million for measures that go in the direction of stabilisation and development: cash for work programs, rebuilding some capacity for governing, when this is possible. And then we connect this with security.

No security – no development. No development – no security. Certainly in the EU we have taken the lead to say: no longer can we slice the humanitarian and development programs separately. We have to think in a comprehensive way. It doesn’t mean that we are politicising humanitarian aid.

We have adopted a very simple formula for humanitarian aid: “in but out”. We are part of the overall assessment; we are part of the solution, but we are very prudent not to link it to any political objectives. We help people because they need help. We put no conditions on that assistance.

And yet we need to look at problems together. Resources are finite. We have to stretch every euro to the maximum, and if we can achieve multiple objectives with funding, of course we must.

The second area in which Europe has taken the lead is the much stronger focus on preventive action. Much better to prevent a disaster from happening, than to respond to it. We have a few successes, like in the Sahel, where we prevented a catastrophe in 2011. In 2012 we had a horrible famine in the Horn of Africa. We could have had the same in the Sahel, but it didn’t happen, because we mobilised and avoided the catastrophe.

A fresh UNHR report points out that the refugee situation in the world appears to be the worst since the Rwanda genocide from 20 years ago. That should ring a bell?

Definitely, and when you look at the origins of trouble, one should not be surprised that we are facing yet another record year for displaced people. Last year was a record year, with over 45 million. This year there are 51.2 million people, according to the UNHCR. When you look at the drivers of the refugee crisis, the Syrian crisis of course tops the charts. Within a couple of years of crisis, Syria turned from the second biggest country receiving refugees, to the second biggest country sending out refugees.

In the humanitarian work of the Commission, we have adopted a very proactive approach: anticipate the crisis, act swiftly, and target the most vulnerable people. In no other place has this approach has been so needed as it has been in the Syrian context. The EU has mobilised €2.8 billion. It is by far the largest donor to the Syrian crisis, helping Syrians inside their country, helping refugees in the neighbouring countries, but also helping neighbouring countries withstand the pressure of these refugees, especially Lebanon and Jordan. This has contributed not only to preventing a regional collapse. It has been the most important factor in protecting Europe from a very large wave of refugees from Syria.

Our job is becoming harder and harder, because we don’t see an end to the Syrian conflict. Today, Iraq is also in a very dramatic condition, with very large numbers of internally displaced people.

I was in Iraq in March, on the occasion of the anniversary of the Syria conflict, to recognise the contribution Iraqi Kurdistan was making to hosting Syrian refugees. At that time, they had about 240,000 Syrians. But I came back from this trip much more worried about Iraq itself. Because what I saw in Baghdad was clearly terrible, with free movement impossible, a military presence everywhere, but also Anbar province in flames, sectarian wars going on, more internally displaced in Iraq than Syrians crossing the border – some 350, 000 internally displaced.

When I came back, we provided additional funding for Iraq, and I signalled to EU member states that we are facing a humanitarian crisis that is likely to become worse. That means that we need to continue to mobilise resources. We should continue to strive for intelligent use of money in this very troubled world.