If Turkey was an EU member, Ukraine war might have been prevented, says minister 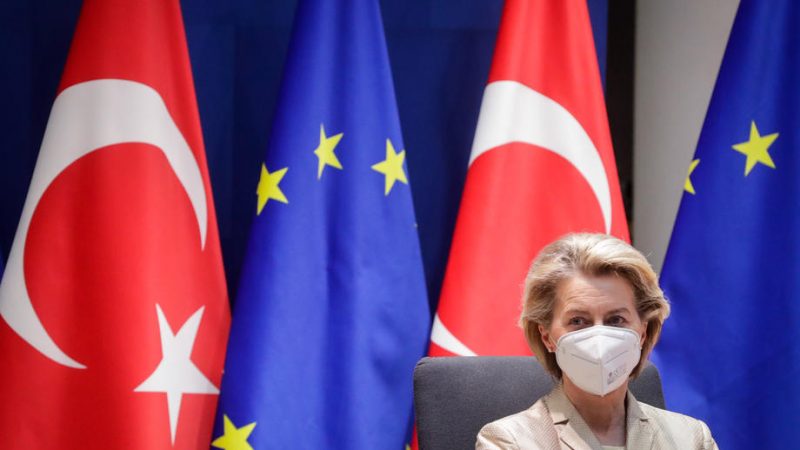 EU Commission President Ursula von der Leyen during a video call with Turkey's President Recep Tayyip Erdogan (not pictured) in Brussels, March 2021. The EU and Turkey are looking to improve their relations after tensions peaked in 2020 over maritime claims in the eastern Mediterranean. [EPA-EFE/STEPHANIE LECOCQ / POOL]

Turkey’s leaders have recently increased talk about their will to return to the negotiating table with Brussels. But what has prompted this new momentum? EURACTIV Slovakia spoke to Faruk Kaymakcı, Turkey’s deputy minister of foreign affairs and director for EU affairs.

Negotiations on Turkey’s EU accession were halted in 2019, following the Turkish government’s crackdown on civil society, media, academia, and others, who have expressed opposition to the regime. President Recep Erdoğan is now asking the EU to relaunch membership negotiations.

Erdoğan’s director for EU Affairs and deputy minister of foreign affairs, Faruk Kaymakcı, told EURACTIV that there is momentum for a return to the negotiating table.

“In the face of the Russian aggression, we have seen the need for a strong Europe and Turkey,” he said.

“A wrong message of a weak and divided Europe, and of a divided Transatlantic world was given,” he explained, adding that if Turkey had been part of the bloc, “treated fairly in the negotiation process”, or had much better relations with the bloc, the war in Ukraine could have been avoided.

“Imagine that we had a solution to the Cyprus issue in 2004. We might have become an EU member by now. Turkey’s EU membership might have prevented the war in Syria, the war in Iraq, and even the war in Ukraine,” Kaymakcı said.

Some analysts suggest that Turkey’s decision to rewind negotiations with the EU is strongly related to the country’s huge trade deficit. Turkey’s annual inflation, as of March, rose to a 20-year high. Ankara can therefore either increase rates, weaken the lira, or secure major external financing.

Kaymakcı argued that improving relations with the EU would also increase confidence in the Turkish economy. He said an update of the EU-Turkey Customs Union might double trade volumes. Within the post-pandemic recovery, “it will be beneficial to both sides.”

Accession perspective ‘had helped a lot’

In his opinion, the best time for Turkey in terms of meeting the Copenhagen political criteria was at the beginning of the negotiation procedure, “up until 2006 or even 2009”. Turkey “believed in the process” and made “tremendous reforms”, he said.

“Many colleagues in the EU called it a silent revolution.”

However, Kaymakcı insisted that the status of Cyprus has seriously damaged Turkey’s accession perspective. “Turkey, marginalised and discriminated as a candidate country, was pushed away from the EU for the interests of one or two member states,” he said.

The EU, however, links the stalled negotiations to the deterioration of democracy in Turkey, including crackdowns on civil society, the lack of rule of law, judicial interference, and human rights abuses, referred to in the latest report by the European Commission on Turkey.

Kaymakcı said the accession perspective “had helped a lot as the most important driving force for higher standards of democracy and rule of law”. Ultimately, he said, undermining the process due to disagreements over Cyprus, “demotivated (domestic) actors in terms of progressive steps”.

Abuse of a right to veto?

Kaymakcı said the EU should encourage both sides to find a solution to the Cyprus-Turkey dispute.

“When it comes to action, member states don’t do much and talk about the need for the EU solidarity. They do not want to create difficulties for Greeks or Greek Cypriots, who would afterwards cause problems to them on other issues. This is a deadlock.”

“The EU should not allow veto rights to be abused, neither in the accession process nor in the EU’s foreign and security policy,” he added.

Asked about Turkey’s perception of Ukraine’s attempt to gain the status of an EU candidate country, Kaymakcı offered full support for Ukraine, but also Georgia and Moldova, the three most ambitious members of the so-called Eastern Partnership.

He cautioned, however, that Turkey has been a candidate since 1999 and there is “no fast track to EU membership”.

Still, he said, Turkey has a lot to offer to the EU.

“No other candidate country can contribute more to the EU, in terms of security and defence, foreign policy, energy security, economy, migration management, harmony, stability and global actorness,” he said.