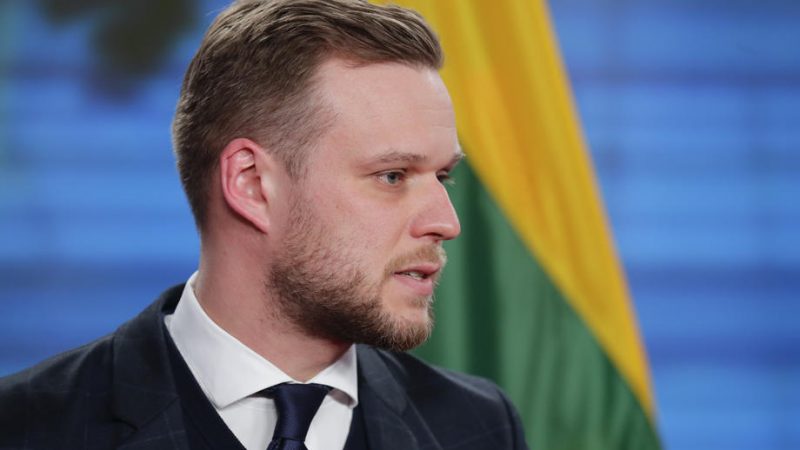 Official entities, such as airlines and tourist agencies, are involved in organised human trafficking via Belarus and could face sanctions, Lithuania’s foreign minister, Gabrielius Landsbergis, told EURACTIV in an exclusive interview.

Earlier on Monday (12 July), he and the EU’s chief diplomat Joseph Borrell accused Belarus of using illegal migrants as a “political weapon” to put pressure on the EU because of the bloc’s sanctions on Belarus.

“We need to be very strict with the regimes that are using these sorts of weapons, first with sanctions,” Landsbergis said, speaking to EURACTIV on the sidelines of the EU Foreign Affairs Council in Brussels, which he said could include a fifth sanction package or broader sectoral sanctions.

“We’re not seeing actual flows of migrants who are fleeing for their lives and choosing a raft that actually endangers their life, but what we’re seeing is tourist agencies selling tickets to the European border, and not so expensive tickets – this is a very different situation,” Landsbergis said.

Nearly 1,700 migrants have entered Lithuania, an EU state, illegally from Belarus this year, more than 1,000 of them in July alone, according to Lithuania’s border guard service.

Half of them identified themselves as Iraqi citizens, while others came from Congo, Cameroon, Guinea, Iran and Afghanistan.

Over the last six months, Lithuania had been reached by 21 times more illegal migrants than in the whole year 2020, it said.

Asked why he thinks Minsk decided to particularly use migration as revenge for Lithuania’s outspokenness against the Lukashenko regime, Landsbergis said that while that would be “one of the most sensitive issues for Europeans,” he called the situation “unprecedented.”

“The difference between how Lukashenko is using refugees as a weapon and Europe’s previous refugee crisis is that in this case, we have official bodies participating,” Lithuania’s foreign minister warned.

“We have to understand that there are official airlines that transfer people from Baghdad to Istanbul or from Istanbul to Minsk, travel agencies that are registered in several countries, that means that there are possibly official bodies who participate in human trafficking,” he added.

“Participating in human trafficking is illegal everywhere – and if we can trace who’s doing that, and especially if it’s an official body, then it can be put to sanctions,” Landsbergis said, adding that such a step would be still in a consideration phase between foreign ministers.

Both Minsk and Moscow so far have denied any such operations.

Lukashenko said last week his government would not close its borders with its neighbours and become a “holding site” for migrants from the Middle East, Asia and Africa.

He added that such migrants were not wanting to come to Belarus but to “the enlightened, warm and cozy Europe.”

Lithuania began building a 550-km razor-wire barrier on its frontier with Belarus on Friday.

The EU border guard agency Frontex said on Monday it would send additional officers, patrol cars and experts to talk to migrants that have reached Lithuania to gather information on criminal networks.

“The situation at Lithuania’s border with Belarus remains worrying. I have decided to send a rapid border intervention to Lithuania to strengthen the EU’s external border,” Frontex Executive Director Fabrice Leggeri said in a statement.

Leggeri later also told EU officials and lawmakers that Frontex was preparing to fly migrants out of Lithuania with a mix of commercial and charter flights for those not granted refugee status by Vilnius.

Landsbergis said that involvement of the European Commission and Frontex is needed not only in the protection of the EU’s external border, but also in the provision of humanitarian aid to migrants and facilitating their return or resettlement.

Asked by EURACTIV whether he fears that Minsk could instrumentalise the Western troops’ withdrawal from Afghanistan for more targeted migration flows, Landsbergis said that as there already have been cases of Afghans crossing illegally the border with Lithuania, “the route is already there”.

“To our knowledge, the route has been facilitated not only by Belarus but possibly also by Russia – this is an increasingly growing worry because we know that since Western troops are leaving Afghanistan, there’s a possibility for the huge migration flows which we are already witnessing in Tajikistan and with Russian facilitation,” Landsbergis said.

“They could reach the European border via Lithuania or even Latvia, Estonia and even Finland and other countries with which Russia has a border,” he added.

“Europe’s message must be short and precise – those illegally entering the EU cannot be granted a refugee status and will be returned to their countries of origin,” Landsbergis said.