Russia analyst: Putin is trying to ‘rectify a historic wrong’ 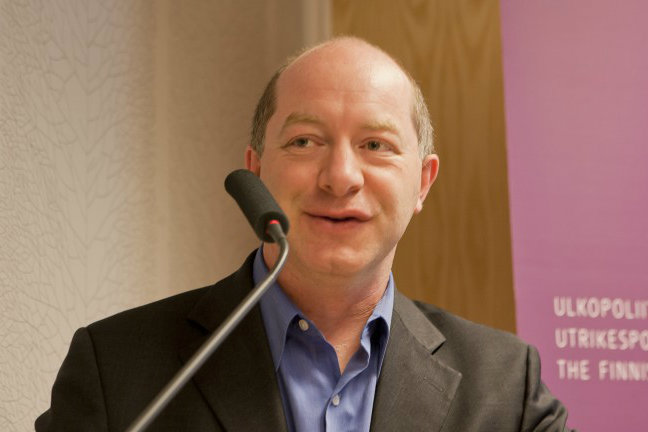 Western containment policy towards Russia in Europe’s east has a different meaning than it did during the Cold War because the ideological component is missing, says Dmitry Gorenburg, outlining the causes for the crisis, Putin’s motivations for annexation and assessing EU-US cooperation.

In April US President Obama spoke of applying an “updated version of the Cold War strategy of containment” in light of Russia’s behaviour in the Ukraine crisis. Is an association with the Cold War useful? And is containment an appropriate remedy for the conflict?

To some extent, the association is useful but I would not overplay it. In the Cold War, the key feature was an ideological difference between the two sides that is almost absent now. There is no big ideological fight, where Russia is trying to convince the rest of the world to follow a completely different system of economics and government compared to the US. What is left, is much more of a general foreign policy difference in terms of perceptions of interest and so forth. Having said that, clearly it is not in the US interest to let Russia have a sphere of influence. This is what Russia seems to want in its immediate neighbourhood.

So from that point of view, I would not use the word containment because of all the ideological baggage from the Cold War. Instead, it would be a situation where the US tries to give the countries around Russia more options in terms of their foreign policy course. But this is something the US has been doing for the last 20 years or so.

What are some similarities and differences between the current state of Russia’s relations with the West and those during the Cold War?

I mentioned ideology. Another important difference is that the Soviet Union really strove for autarchy during the Cold War, for self-reliance among the Soviet Union and its allies and as few interconnections as possible with the rest of the international system. It never really achieved this completely, at least not after the 1930s or so, but the goal existed.

Whereas now we are dealing with an environment where there are a lot more connections both in terms of economic ties but also freedom to travel, for example, allowing Russians to go abroad.

That creates a lot more interdependence between Russia, Europe, the United States and the rest of the world. This has a moderating influence on relations.

That is the general difference, but we can talk about more specifics within that, like energy ties. While the Soviet Union certainly exported energy to Europe, starting in the 1970s, at that time it was much less central than it is to the relationship now. Energy is playing a more central role now in policy.

How much of the current conflict in Ukraine can be traced back to Western or Russian antagonism, and how much can be perceived as an organic movement from the Ukrainian population?

At the first stage of the crisis, before it became internationalised with the intervention, it was primarily a domestic crisis. Then, at least for a while after Yanukovych left, it shifted to becoming primarily an international crisis over Crimea. Clearly, this part was orchestrated by the Russian government. The main theatre of action was between the Russian government, on the one hand, and the Western governments which tried to calibrate sanctions to try to initially reverse the situation. Once it became clear that this was not going to happen, they tried to limit Putin’s actions as much as possible. Because the Ukrainian government was just being formed, was largely in chaos and was not yet recognised by Russia, it was really left on the side lines during that period.

Then there is the third stage, which we are in now, where it again becomes a domestic issue, though with an international component regarding the eastern Ukraine situation. The main actors in eastern Ukraine appear to be largely domestic opponents of the new government together with volunteers of sorts from Russia, who are almost certainly assisted by the Russian government – but the Russian government is not taking a lead role as it did in Crimea in the separatist activity.

Now you have this situation close to a civil war in eastern Ukraine with the international community trying to influence the situation. Depending on which party or which week it is they are trying to stop the conflict or sometimes, in Russia’s case, encouraging it. There is this international component to it as well, but a large part of what’s going on now is domestic.

Are we seeing Russian foreign policy in Ukraine that is primarily driven by Putin himself?

It is hard to tell how much is purely individual and how much is what some people call the “collective Putin”. Are these his own personal motivations, or are they the motivations of a closed circle of advisors, together with what he is interested in? I would tend to believe the latter, but it does not really matter very much as long as they are all acting from the same script. However it does seem that what is happening, as far as Russian foreign policy is concerned, is much more personal, and about the interests of the ruling elite, than about general Russian national interest.

Much of what is going on has to do with securing Russian regime survival. These moves, both in Crimea and supporting separatists in eastern Ukraine, have done a couple of things that are to the benefit of Putin sticking around.

First, there is the increase in Putin’s popularity due to the upsurge in Russian nationalism. That was done deliberately. Putin felt his popularity had declined, after the protests in 2011 and 2012 – and here I refer to “Putin” as a representative of Russian power. Doing something that symbolised to the population the restoration of Russia as a great power and reversing some of the humiliations of the break-up of the Soviet Union has led to a spike in Putin’s popularity.

At least for now, it does not seem like he will have too much opposition. The opposition in Russia that has opposed some of those moves has been discredited among the vast majority of the population. But on the international scene, Russia had a sense of being kicked around by the US and feeling that its foreign policy views were not being taken into account. Even if it is a negative image that Russia is projecting to the world now, at least it is being taken seriously and everyone has to deal with it.

Economically, Russia is very closely interconnected with the West. How is this affecting Russia’s current foreign policy?

The economic interconnection is helpful in moderating the course to some extent. We see that the sanctions hurt the interests of part of Russia’s elite, although this was not so much the case for the top people – which is why they persisted with their course.

Now the elites recognise that if they had gone ahead and perhaps openly invaded eastern Ukraine, the economic damage for Russia might have been too large for them to handle. I think that is why we are seeing these very carefully calibrated moves to limit open support for the separatists as much as possible without abandoning them entirely. Putin is holding out for some kind of deal that assures Ukraine will not get too close to the West.

As a result, Russia continues its support in order to be sure of not losing entirely. This stability is maintained as a lever to try to pressure Ukraine into making a deal. If there was no economic connection, there would be a lot less incentive for moderation, and we could see a lot more open Russian intervention.

What role does public opinion in Russia and in Europe play in the Ukraine conflict? And what are some notable similarities or differences between the two publics in this context?

Public opinion is very much supportive of Russian actions, because (Russians) see it as a reversal of the humiliations Russia suffered during the break-up of the Soviet Union. Crimea, in particular, was seen as a part of the country that was historically Russian, and should never have gone over to Ukraine. So public opinion regarded the annexation of Crimea as rectifying a historic wrong. There is also a media narrative that is encouraging these kinds of attitudes, which has also contributed to this kind of perception.

I am not sure what kind of a role public opinion has played in most of Europe and the West. In Europe, in particular, it seems decisions are made much more by political elites rather than being driven by public opinion.

In the US, there is not much appetite for any kind of intervention at this point. We are also seeing this with what is going on in Iraq now. There is an effort by politicians to not seem weak or ignore what is going on. But at the same time, that is the minimal amount that needs to be done. The public in the US has been much more focused on domestic problems, or on other aspects of foreign policy, like the Middle East, for example.

Western policy seems to be much more driven by other factors, either perceptions of Russia among the political elites, or perceptions of foreign policy and economic interests in the region, rather than public opinion.

How should the United States work with Europe in addressing Russia, and the situation in Ukraine?

There is already a lot of cooperation taking place. I think President Obama has pursued a very correct course: avoiding overreaction, but at the same time ensuring that something is being done. The sanctions have had an impact on moderating Russia’s course.

It would have been helpful early on for Europe to have taken a stronger line, but there was a fear that the economic fallout for Europe would be too severe. For this reason, Europe was not willing to implement serious sanctions early on. At this point, unless there is more escalation from Russia, there is not really a need for stricter sanctions. It is better to keep them as a threat that can be used to prevent escalation instead of using them now, when there is a danger that Russian leaders might think there is nothing left to lose.

The US and European countries have demonstrated a more or less good course on this. Perhaps a little weaker than ideal, especially on the European side, but I do not think there are any serious benefits to any kind of military intervention. Of course there were some calls in the US to provide military assistance to Ukraine. That may have been a good policy in the longer-term, but it would not have been a good idea while the Ukrainian political system was largely in chaos. Any weapons that were provided could have fallen into the hands of the separatists, as many Ukrainian weapons did.

In the longer-term, there are things that can be done to strengthen both the Ukrainian political system, and its security forces, to ensure that this sort of thing does not happen. But that is more of a long-term policy.