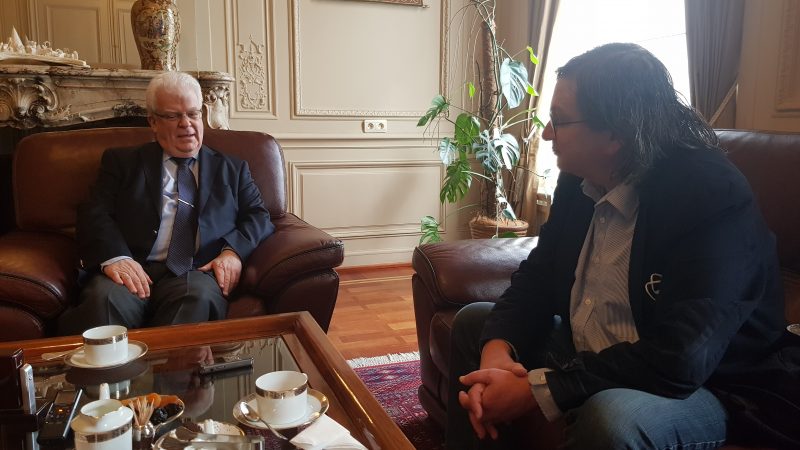 In a wide-ranging interview, the Russian ambassador to the EU, Vladimir Chizhov, discussed his country’s military operation in Ukraine, plans to return to negotiations under another government in Kyiv, sending to court Volodymyr Zelenskiy, the effect of Western sanctions and more.

Vladimir Chizhov is a career diplomat. Before being appointed ambassador to the EU in 2005, he was Russia’s Deputy Minister of Foreign Affairs. He spoke to EURACTIV’s senior editor Georgi Gotev on 25 February 2022.

(Edits in this interview have been made upon request of the Mission of the Russian Federation to the EU.)

We agreed this interview one week ago. I wonder if you knew what was going to happen…

We were both overtaken by events.

So you were not aware of what was to come?

Those who needed were. Though the propaganda campaign started long before any specific plans were outlined definitely.

In terms of propaganda, there are always two sides…

I watched you on Euronews saying that there will be no Russian invasion of Ukraine, that the reaction of the West was “hysterical”.

But the Americans were right.

There is an invasion.

This is not an invasion. It’s a peace enforcement special military operation.

You can call it whatever you like, but the Russian army is everywhere in the country.

Tanks are rolling into Kyiv.

Actually, what the Russian armed forces are doing is in support of the counterattack by the militias of the two now recognized Donbas republics. Who have undertaken a major military effort, because after eight years of being continuously shelled by the Ukrainian armed forces, and especially by those so-called voluntary nationalistic battalions, evidently, their patience came to an end.

It’s an effort aimed at de-Nazification.

Who are the Nazis?

Those who march with Nazi salute, those who go around Kyiv and other cities with portraits of Nazi criminals, like Stepan Bandera, whose birthday has been proclaimed national holiday.

There are, unfortunately, neo-Nazi marches everywhere in Europe. Does it mean the Russian army will come because there is a neo-Nazi march in Bulgaria?

Well, not to the extent. At least in Bulgaria, you don’t rename your holidays, you don’t erect monuments to Nazi criminals.

Is this why Mr Lavrov said Ukraine is not sovereign? Because they don’t have the right to have the monuments they wish?

As far as de-Nazification is concerned, I think the whole international community should abide by the decision of the Nurenberg tribunal of 1946.

We already hear of the International Criminal Court, which may be seized under the circumstances. Mr Putin mentioned genocide. Where is the genocide in Ukraine?

The number of the victims of the Ukrainian military operations during these eight years clearly indicate there have been more than a dozen thousand civilians who died as a result, and the official positions pronounced by the Ukrainian authorities, including president Zelenskiy, indicate in that direction. Like if you don’t accept the rule from Kyiv you should better leave.

This is not genocide.

And people have been actually exterminated, by continuous shelling of residential areas. We can turn to the official term of genocide as coined in international law. [United Nations – definition of Genocide] If you read the definition, it fits pretty well.

Sometimes when I don’t have enough information I try to put myself in the shoes of other people. Like President Macron, whom we saw sitting at that long table. When we heard Mr Putin speaking about the origins of the Ukrainian state, speaking about genocide and de-Nazification, I sort of understand why the two didn’t have a proper conversation. You probably receive the readouts of such meetings, can you provide some insight?

Let me start with why the table was so long. That’s because President Macron’s entourage prevented him from passing a PCR test on arrival, which is the general rule. Other leaders who visited Moscow lately chose to do that. But it was his decision, under the procedures at that time of the pandemic. Actually, he continues to be in direct contact with President Putin. They had a telephone discussion yesterday, discussing the possible steps forward. I understand that Macron called Putin yesterday at the request of Zelenskiy.

I haven’t seen yet a readout yet from yesterday’s conversation, but I can broadly say that throughout all these years, we appreciated the initial initiative by France back in 2014 to use this Normandy gathering to set up a negotiating format, which we hoped would facilitate progress along the implementation of the Minsk agreements. Unfortunately, the efforts of France and Germany over all these years were not sufficient to persuade Kyiv to implement the Minsk agreements. I can refer to the very last meeting of the political advisors of the Normandy leaders in Berlin, a couple of weeks ago, where the Ukraine representatives refused even to mention Minsk in the final communiqué. Which meant that the Minsk agreements were practically dead as they could be.

That’s one perspective. When I was preparing to meet you a week ago, I prepared to discuss Minsk, but this was practically destroyed by the unilateral recognition by Russia of the so-called Donetsk and Lugansk republics.

No, they were not. Because after the recognition, nothing prevented Kyiv on one hand, and Donetsk and Lugansk on the other, to engage in direct negotiations with the aim of resolving the crisis.

To negotiate while a military operation is ongoing?

You mentioned recognition. Recognition was before the military operation.

Two days. Never mind.  At some later stage, a possible new government in Kyiv and authorities in Donetsk and Lugansk would be able to find common ground to negotiate friendly relations.

Why should we compare a government to another?

Because it’s easy to understand.

[Laughs] It doesn’t matter if this new government is friendly to Moscow, it matters if it is able to negotiate with the people in Donbas. At this point, I don’t see any possibility the current Kyiv regime to be able to negotiate. And I’m not saying that the Minsk agreements as they are would be applicable. But they could be used as a basis for further negotiation.

Negotiations would be possible if the Russian army withdraws without making territorial changes. Is this possible?

Our intention is not to stay forever. The Russian army will finalise this operation, hopefully sooner rather than later, and will leave.

But maybe Mr Putin has other plans, to seize territories…

I haven’t been picking my President’s mind. But what do you mean by other plans?

I assume that if the Russian army is there, it will not leave without territorial gains.

For Russia? No. That has never been our intention. We have enough territory. What you may be indirectly implying is that the territories of the Donetsk and Lugansk people’s republics will be actually extended to cover the whole of those two “oblast”.

To the official boundary, which delimitates a territory much bigger than they have been controlling until now.

Yes. These are the borders reflected in their constitutions.

Do you think diplomacy has a future?

Yes. Actually, the Russian army is there not to start the war, it is there to end the war. That’s what we always do. Like in Karabakh. Like in Tajikistan, if you remember.

You met yesterday with a representative of the External Action Service.

Was it a useful meeting?

I think it was. I explained our reasons, our motives. He gave me an indication of the thought process in the EU.

We didn’t mention sanctions up to now, both of us…

Rightly so, because sanctions is something the UN Security Council imposes. Anything else is not sanctions in the legal sense.

We can discuss those that have been imposed. I would refrain from discussing those that are coming.

Correct me if I’m wrong. Your leader has made a decision and I don’t think sanctions are important to him.

We will survive. There have been leaders from places outside the EU who had been predicting, with the previous round of sanctions, that the Russian economy would be torn in pieces. But it has survived. We know how to calculate risks and deal with the fallout of any sanctions that may be forthcoming. And sanctions have the effect of boomerang, they hit very often those who impose them. Not because of the counter-sanctions, but because in this very interconnected world, in this global economy, they would be hitting back.

Do you see the EU as united at this moment?

We understand that any decisions taken in this area are taken unanimously. Which indicates that there is a certain degree of discipline. Whether this reflects all the voluntary positions of any individual country, this remains to be seen. Energy is an area where the degree of interdependence of Russia and the EU is great. There has been a lot of steam around Nord Stream 2. Which is not actually a Russian project, it’s not Russian property…

Let’s go back to Ukraine. What did we miss?

We are particularly worried about certain declarations coming from Zelenskiy, that he intends to scrap the Budapest Memorandum of 1994 and proceed to turning Ukraine back to nuclear status. Well, Ukraine never had nuclear status, it was part of the Soviet Union which was a nuclear power. So it’s not taking back something that belonged to Ukraine. But Ukraine has four running nuclear power stations, plus a fifth one – Chernobyl. And it has retained enough scientific expertise. At least to do the so-called dirty bomb.

I hope not. Because if it is, one should ask the EU and the US, those people who are busy writing further sets of sanctions, are they doing the same with Ukraine? It’s not the Budapest Memorandum that matters, any step in this direction would mean a clear violation of the non-proliferation treaty. That is the legal instrument. If that happens, the whole international community will have to turn against Kyiv and produce certain demands.

Do you think Mr Zelenskiy will be killed in a military operation? 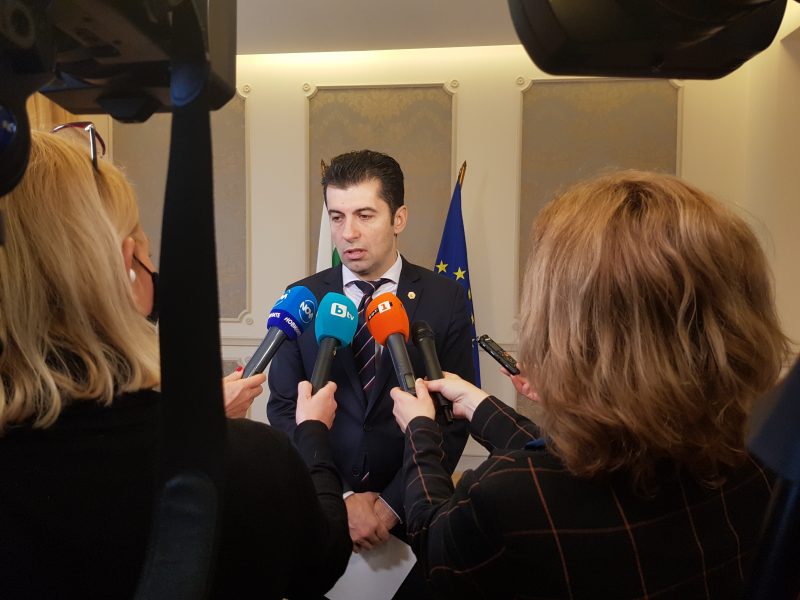 Bulgaria’s Petkov: Zelenskiy may not be alive in the next 48 hours

European Union leaders reeled in shock following the latest video call with Ukrainian President Volodymyr Zelenskiy, who addressed them in a way similar to a final goodbye, according to Bulgarian Prime Minister Kiril Petkov.

I hope not. Actually killing leaders of states is somebody else’s style, not ours. Maybe there will be a tribunal to deal with him at some point.

But what’s the charge?

It’s up to the renewed authorities in Kiev and their tribunal to deal with him.

I don’t know what will be the specific charges against him. There are professional lawyers to deal with that.

Your guess is as good as mine.

I don’t want to go into the details of those decisions that have been announced in the last few days, but some of the decisions were surprising to me. I will give you two. One is the deputy Prime minister Khusnullinin [Marat Shakirzyanovich], who is in charge of infrastructure. What has he done? The claim is he has facilitated the resumption of water supply to Crimea and Sevastopol. OK, the whole bunch of ecological NGOs and movements insist, and I think they have a point, that the right to clean water is one of the fundamental rights of people. So this man has managed to save two million people from dying from thirst. And he is put on a stop list for doing that. And the second case is our good friend Maria Zakharova. It’s a first occasion when an active diplomat has been put under sanctions for doing her job.

I am not. Why should I be? If only for trying all these years to promote Russia – EU relations!