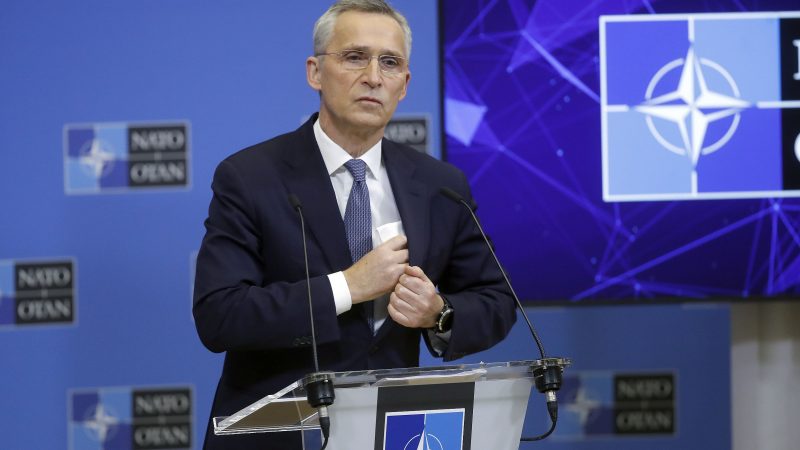 NATO Secretary General Jens Stoltenberg gives a press conference at the end of NATO-Russia Council at the Alliance's headquarters in Brussels on 12 January 2022. [ EPA-EFE/ OLIVIER HOSLET]

The big powers, including Moscow, cannot decide about the smaller ones, NATO Secretary-General Jens Stoltenberg told EURACTIV’s partner efe in an interview in the midst of a crisis triggered by Russian forces amassing near Ukraine and Moscow’s demands that no Eastern European countries join the Alliance.

“The big powers cannot decide about the smaller ones. That is the message and, of course, Russia knows that”, Stoltenberg said, adding that Moscow “cannot decide what neighbours can and cannot do”.

He said the decision on whether Ukraine joins NATO one day is for Kyiv and the 30 allies alone to make.

The Kremlin has called on NATO to give up on extending membership to Ukraine and Georgia. In turn, Stoltenberg asked whether acknowledging publicly that Kyiv will not be a NATO member in the medium term would really help ease tensions with Russia, saying that it is not “primarily” about the former Soviet republic joining the Alliance.

“This is about a significant military build-up by Russia and the fact that Russia is already violating Ukraine’s territorial integrity by occupying Crimea and controlling separatists in the Donbas,” Stoltenberg said.

He stressed that it is also about “a basic principle for European security that has worked well for decades”, referring to the fact that “every nation has the right to choose its own path, including whether it wants to belong to a military alliance such as NATO or not”.

The case of Finland and Sweden

Stoltenberg mentioned that following Russia’s request that the Alliance should not expand further in the east, Finland and Sweden, which do not belong to NATO, “objected very strongly”.

“Not because they are applying for membership but because Finland and Sweden, being close to Russia, see the danger of re-establishing a system of spheres of influence in Europe, where a big power like Russia can decide what smaller neighbours can and cannot do.”

“So it’s about upholding the sacred and important principle of the right of every nation to decide its own path and to respect that decision,” he noted.

Stoltenberg warned that if Russia invades Ukraine again, it will have “serious consequences” and Moscow will have to “pay a heavy price in economic and political sanctions”.

He pointed out that NATO allies provide support to Ukraine, which helped its armed forces to be “much better trained, much better equipped now than they were in 2014” when Russia annexed Crimea.

“We call on Russia to de-escalate and engage in serious dialogue with NATO allies,” he said, following Wednesday’s NATO-Russia Council meeting, the forum’s first meeting in more than two years.

He admitted that there is no “certainty” about Russia’s “exact” intentions in Ukraine, but stated that there is a known military build-up of forces, coupled with Moscow’s “very threatening” messages in recent weeks and its record of attacks on neighbouring countries.

In any case, Stoltenberg acknowledged that NATO is prepared to “have serious discussions (with Russia) on arms control, mechanisms to reduce the risks of incidents and accidents, transparency of military activities or missile limitation”.

On the other hand, he welcomed US President Joe Biden’s commitment to European security and stressed that Washington had coordinated with European allies for bilateral talks with Moscow.

“Of course, when discussing European security, we need Europe at the table. NATO ensures that Europe is at the table, but also that the United States coordinates closely,” he said.

Stoltenberg’s term as NATO chief ends on 30 September. Asked if a candidate from an Eastern European country would lower or raise tensions with Moscow, he said that “the most important thing” is that it is necessary to “be prepared for unforeseen events and to demonstrate unity in dealing with a more uncertain world”.

“I am absolutely certain that this will be the case regardless of who is at the helm of this Alliance,” he noted.