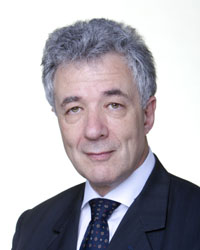 At a time when pressure is coming on the UN to find solutions to the global issues such as Syria and Iran – and to reform of itself – the EU's UN ambassador explains how the EU is playing its part.

Thomas Mayr-Harting studied at the College of Europe at Bruges, and spent much of his subsequent career as an Austrian diplomat working on European issues. Before his appointment as European ambassador, he represented Austria -during its tenure as Security Council member – as ambassador at the United Nations.

How is the EU's new observer status working compared with the previous EU presidency-representation system?

We are confronted with a situation that we have to cope with. On the one hand – under the terms of the Treaty of Lisbon – the EU is meant to speak with one voice. Since the Lisbon Treaty, the EU speaks through its institutional representatives and we do this here through our observer status. So it is a fact that our member countries are members of the UN and we are observers, but we can speak through this mechanism, despite the difficulties with getting a resolution on the issue, and we are now in a trial period.

What is the role of the High Representative? How does the EEAS operate in New York?

Evidently the whole idea of Lisbon treaty was to bring the best strands of European representation together under the High Representative. She unites in her person: presidency of the EU Foreign Affairs Council (a task formerly in the hands of the rotating EU presidency), the functions formerly exercised by Javier Solana, and those of the former Relex Commissioner (Benita Fererro Waldner). When it comes to political issues, it is clearly the EAAS which supports her, and Helga Schmidt is the deputy secretary-general and the political director of the EEAS, and so if she comes from Brussels to speak for the EU in the Security Council (as she is doing this time), it is she who takes the floor and not the ambassador.

What about the problems with the UK, which insist on preserving its own voice?
The way that the UK explain it to us is that they want it to be clear on whose behalf we speak. They have no problem with me or any other representative of the EU speaking; they want clarity whether in certain situations we speak on behalf of the EU or on behalf of the EU and its member states.

So in a certain sense the issue is whether we are speaking on an area where there is an exclusive competence of the EU, or where the EU is also speaking on behalf of EU member states. Budget issues are a special case. It is the member states that contribute a sum total through their national contributions of something close to 40% of the total regular and peacekeeping budgets of the UN, whereas the EU itself does not contribute to these. But it is felt that it is useful for the EU delegation to coordinate the budget issues and speak on behalf of them. In this case, I speak "on behalf of the member states". So you have to sort out into which category an issue belongs. This requires a certain amount of discussion. But I think that, the UK included, everyone agrees that sometimes even where there is an exclusive competence of member states, such as on the budget, it may make sense that we co-ordinate and speak with one voice because it is in the interests of taxpayers in every single member state of the European Union.

What scope is there for reform of the UN?
The reform agenda here is something that is broader than just the Security Council. There are many areas where the EU has a strong interest, such as the UN “delivering as one”. The UN is a family of agencies and sub-structures and the EU often uses the UN as a channel for its humanitarian and development co-operation. We therefore have no interest in duplication of these structures, so the UN could improve its performance there, and that is where we have an agreed position and where we speak strongly with one voice.

On the Security Council, when it comes to the specifics of reform and the question whether there should be new permanent members, there is no agreed position.

It is true that in the most recent election for the Eastern European group – when Azerbaijan was elected against Hungary and Slovenia – Azerbaijan used the argument that five EU countries would be too much on the Council.

How do you feel the position of China has changed within the UN
Beijing started to represent China in the early 1970s, after the decision was taken to recognise Beijing [rather than the Kuomintang in Taiwan] as China’s representatives. Their activity in the UN has grown in parallel with the growth in their international relations. One of the most fascinating aspects is the engagement of China in Africa. The new AU headquarters was built and financed entirely by China.

Much Security Council business relates to Africa and a country such as China is very much engaged. For China, the issue of access to natural resources is an important aspect of foreign policy, and this undoubtedly played a role on Sudan and southern Sudan, which possess oilfields that provide China with fuel.

On the one hand China is a permanent member of the UN Security Council – which sided with Russia in the recent Syria veto – but they are also affiliated with the G-77 group, and see their role as acting in the interests of the southern hemisphere as well. I certainly think they are an increasingly important actor now also in the UN context and cooperation with China in multilateral fora is an important aspect of the strategic partnership that EU has with them.

We also have a close dialogue with China on Iran in the EU 3 plus 3 configuration, and we hope that their position on Syria will still move, because there was much disappointment about the positions of Russia and China on Syria.

How significant a role do you think the UN will play in the coming months?

I think that there is no alternative to the UN in many situations where a multi-party engagement is needed. But this also needs to be combined with regional ownership, which is why we felt that it was important on Syria that it was an Arab-led process, through the Arab League. The European Security Strategy and the Lisbon Treaty also stress the EU's commitment to effective multilateralism, with the UN at its core. I am sure that the UN will continue will play a key role in Syria and Libya and with regard to the Arab Spring.